Advocacy at the Core of Civil Society 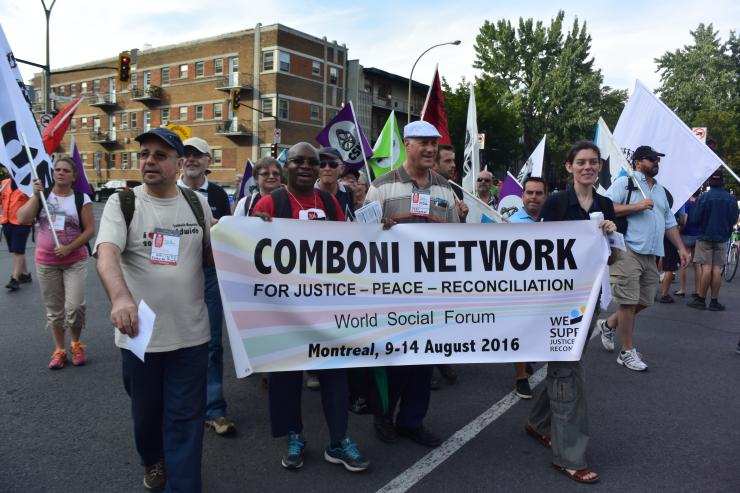 The World Social Forum (WSF) is one of the most important successes of Pope Paul VI, the “New Areopagus” of evangelisation. This year, the 12th edition of the WSF took place from 9-14 August in Montreal, Canada. A group of Comboni Missionaries attended and tell us about their experience here.

The date and place of this year’s WSF brought with it many limitations: many people coming from Africa, Latin America, and Asia were denied visas; events were scattered in many different locations; and the WSF had to battle the Olympics in Rio de Janeiro and other cultural events in Montreal for news coverage. Nonetheless, the 2016 WSF gathered tens of thousands of people from many different origins in civil society – organisations and social movements who want to build a sustainable and inclusive world where every person and every nation has a place and can make their voice heard.

More than 1,000 workshops, conferences, and events were organised as part of the Forum, which aims to be an open platform of world civil society and to search for new ways of building a better world for all. It is fair to consider the Forum the biggest global instance of advocacy that brings together and interlinks organisations and movements of civil society from all the countries in the world.

The Comboni Missionaries, partly in partnership with other organisations, organised 6 workshops. We were there to represent the Comboni Network, as the WSF is an apolitical, non-religious, and non-ideological gathering – even though all these backgrounds are, of course, inevitably present, and our workshops were faith- and gospel-based.

The sixteen Comboni Missionaries and Sisters who attended the 2016 WSF in Montreal affirmed in an open letter: “We believe that participation in the Forum is a sign of fidelity to the charisma of our founder, St. Daniel Comboni, who fought for the liberation from slavery and the regeneration of Africa.” In the seminars, they said, “we had the opportunity to present and raise awareness of the dramatic situation in South Sudan, the Democratic Republic of Congo, and Brazil, highlighting the struggle for a just peace, the commitment for social transformation, and the opposition of local communities to social and environmental violations… we even dealt with the analysis of the land grabbing issues, of human trafficking, and of climate change, highlighting the work of advocacy for a global intervention strategy.”

After being inspired by the Bishops’ Special Synod on Justice (1974) and taking part in six WSFs, I believe that missionaries today should consider work that promotes justice, peace, and integrity of Creation as essential to evangelisation. What is needed is a real commitment to promoting advocacy, and even more to promoting the advent of God’s Kingdom on earth.

PreviousAfrican Languages in a Time of Globalisation
NextBolivia: Market Theology