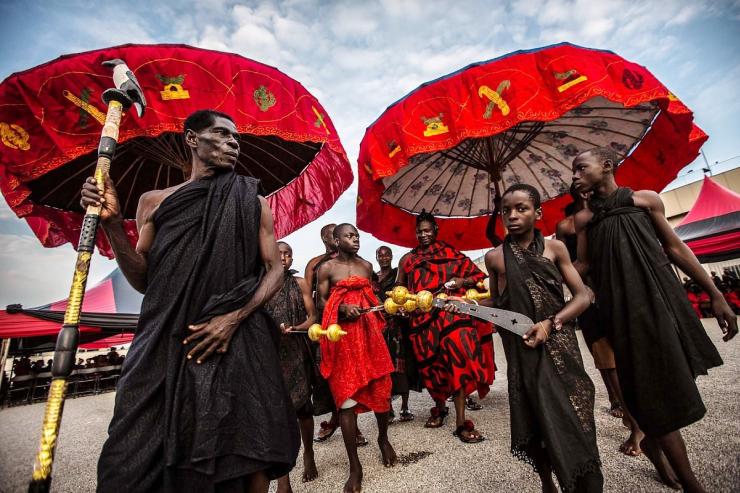 The world view of the Ashanti community is reflected in the ancestral worship ceremonies which are performed to ask the deceased for protection, and in those ceremonies that are held to pay tribute to the king. These ceremonies are held to reaffirm individuals’ membership to the group, and the Adae Kese festival is one of them.

The Ashanti tribe, the largest in Ghana, are people of Akan origin, famous for their wealth and their royalty. Since the seventeenth century, their cultural and social traditions have been passed on from generation to generation with pride. Ancestor worship is deeply rooted in this group, which celebrates the deceased in grand ceremonies. The Adae Kese festival is the most important of these.

The Ashanti calendar consists of nine cycles of 40 days, and the Adae is celebrated at the beginning of each cycle. The last of these cycles is known as the Adae Kese or great Adae, which coincides with the New Year celebration.

The private part of the festival is celebrated exclusively by the king, accompanied by a small number of court dignitaries, and it takes place in the throne room of the royal palace of Kumasi, which is always locked and guarded. The throne room contains the thrones of all preceding kings, starting with the throne of Osei Tutu – the founder of the dynasty. The sacred stool, which is considered the abode of the spirits, is the main object of worship in the Ashanti’s veneration of ancestors. The spirits are believed to watch over the living, protect them in times of need, or punish them if they do not respect traditions.

The Ashanti people believe that spirits who do not receive the right worship can turn into enemies and use their negative power against people. According to legend, Sikadjua Koffi, the golden stool, descended from heaven on a Friday. The seat placed itself before the monarch Osei Tutu in the presence of his famous sorcerer Konfuo Anokye, who interpreted the scene as a sign that the gods and the ancestors recognised Osei Tutu as their sole representative on earth. The event demonstrated King Osei Tutu’s divine nature and placed temporal and spiritual power in his hands.

On the day preceding Adae, the Dapaa, elaborate preparations are made for the ceremony: the houses and their surroundings are cleaned meticulously. At dusk, the drummers gather in front of the royal palace of Kumasi to accompany the ceremonial songs, which are performed until late at night. Since ‘dae’ means resting place, all work activities and travelling are prohibited on that day, unless they are connected with the ceremony.

Children born on those two days are named after those two days. On the following morning, at dawn, the ritual is commenced by pouring water from a gourd at the entrance of the throne room, and inviting the spirits to purify their hands in order to attend the party.

The asantehene eats nãme or bananas without salt, as salt is seen to repel spirits. What is left of the ritual meal is offered to the spirits of the dead, and spread on the patio outside the house. The sound of a bell indicates that eating is taking place. The service continues with the sacrifice of a sheep, whose blood is spread on the front of the king and on the thrones. The queen mother then makes the offering of fufu, a cassava mixture. She spreads the food and spills some rum or schnapps, a kind of brandy distilled from grain, potatoes, and molasses. The rest is shared among those taking part in the ceremony.

While the private ceremony is held in the royal palace, several chiefs of the neighbouring territories, along with nobles and dignitaries, wait for the public ceremony to start in a large tent set up in one of the inner yards of the palace, where the king, the asantehene, Otumfuo Osei Tutu II, is expected to pass through.

A crowd of devotees also participates in the public ceremony, wearing traditional dresses adorned with gold jewellery that represent the motif of the solar disk; decorated leather sandals; and hats coated with gold plates with animal motifs. The atmosphere is magical. The men of higher social standing wear the kente, a cloth worn wrapped around the body and draped over the left shoulder like a sort of toga. Kente cloth designs vary, with different bright colours and geometric patterns, each rich in symbolism.

The arrival of the asantehene is announced by the beat of drums and the blowing of horns. The king goes to the centre of the courtyard and sits under a big red umbrella with his feet on a stool. The embalmed head of a lion is placed opposite the stool as a talisman. The king’s feet must never touch the ground, or else he would lose his power. The king wears a kente, a symbol of kingship, which is specially designed for him and richly adorned with jewels and gold pendants. The display of gold jewellery has great symbolic value – it highlights the social status and the wealth and prosperity of the kingdom. However, today many of the traditional jewels are replaced by new ones, made of silver or golden bronze.

The king sits in front of a narrow corridor, flanked by men with swords and knives with gilded handles, as well as guards armed with rifles decorated with gold inlaid works. A man fans the king, while the king’s advisers and family stand behind him and beside him. Some of them are in charge of scaring evil spirits away by using horse hair plumes.

Since the king has a divine nature, people can only address him through an intermediary. While the courtiers offer their gifts, some men sing songs about the history of the Ashanti kingdom; they are accompanied by the sound of drums and horns, the latter made from ivory tusks. Suddenly the music stops. The ceremony is over. The king re-enters the throne room to hand some of the offerings he received over to the spirits of ancestors, while all the people go happily back home under their protection.

PreviousDijbouti: The Witness Presence
NextMexico: The Ritual Dance of the Flyers