Mexico: The Ritual Dance of the Flyers 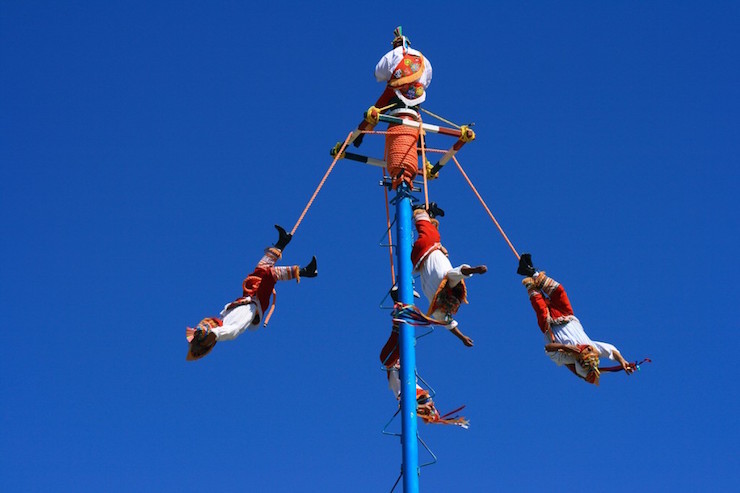 This ancient ritual has been vital in the social and cosmological cultural rituals of the Nahua, Totonac, and Otomi peoples in the northern region of the State of Puebla.

According to the Totonac mythology, the ritual was created to ask the gods to end a severe drought that forced these peoples into hunger. The wise old people mandated five chaste young men to cut down the tallest, mightiest tree in the forest to be used in a rite of offering with music and dances, to appease the gods and bring back the rains. The ritual pleased the Sun God, so the rains began again and the fertility of the earth returned. Brown hills turned green again and people could satisfy their hunger and thirst. Since then the Totonac people have passed down the prayers learnt from their ancestors who experienced those hard times. In many communities, and particularly in Huehuetla, a Totonac town of the Sierra Norte de Puebla, this dance involves a process of preparation, purification, and dedication. The dance is framed in a wider ritual, which begins when the tree, about 30 meters tall, is selected and then cut down, with the permission of the mountain god (Kiwikgoló) – followed by the performance of the dance of pardon. After four days, the tree is stripped of its branches and dragged to the place in the village where it will be erected ceremoniously. The involvement of people in the preparation of the ritual is important, and it is essential that dancers practise sexual abstinence for seven days to dedicate themselves exclusively to the preparatory work.

The ritual begins with five men dancing counter-clockwise around a tall pole, to ask permission from the gods to climb it. Then, the five men free-climb the pole. When they reach the top one man, the ‘caporal’, remains there playing a drum and a flute, whilst the other four jump off and spin around and down, attached to ropes they tied to themselves at the top. According to a dancer from Huehuetla, “The dance symbolises the origin of the earth, so the dancers turn around the pole as the earth does around the sun.”

Although significant variations in the ritual exist among different communities, several dancers agree on the meaning of some items of their outfit: the plume on their heads symbolises the moon, a circle of colours represents the rainbow, flowers represent nature, while star-shaped mirrors symbolise the sun and the fringe represents the rain.

Since this is a polysemous ritual, some local exegeses associate it with fertility; others with an invocation to the four winds, and to some others, the ritual represents the releasing of hot and luminous energy related to the sun, or an encounter between the celestial and the subterranean levels of the universe. According to yet some other interpretations, the palo volador is a symbol of fertility.

Over time the ritual has been performed with some modifications in the number of dancers, music, customs, and dance choreography. The dancing group consists of 12 members, including adults, youth, and children, and five dancers climb the pole to jump off. The ceremony was named an Intangible Cultural Heritage by UNESCO in 2009, but the dancers underline that their purpose is not to perform a show or a folk dance, but a ritual of offering to Kinpuchinakan (God the Father) by the members of the community.