Japan: The Way of the Kami 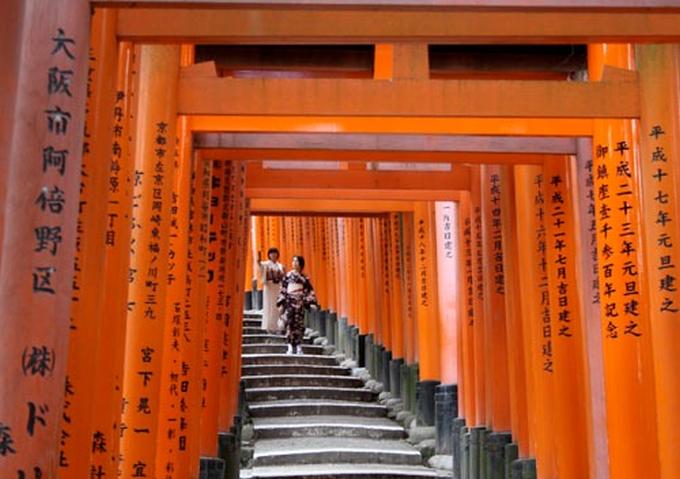 The Japanese religions may be compared to a multi-coloured tapestry depicting diverse traditions with a history going back almost two thousand years — a journey towards others and towards nature.

Japanese religious culture is composed mainly of Shintoism and Buddhism, both influenced by Confucian ideas and values and, to a lesser extent, by western Christianity. Historically, Confucianism provided Shintoism, the original religion of ancient Japan, with its main moral foundations — with its stress on family duties and the extension of these values to school, industry and state. Many Japanese religious groups, defined as “new religions”, also emphasise such values as loyalty, sincerity, gratitude, correctness and transparency.

According to Shintoism, or ‘the way of the Kami’, the ancient Japanese lived in a sacred world. Its followers found superior forces, which erupted here and there in all natural phenomena, to threaten or benefit man. These powers, strictly connected with man, were called kami. The term referred to any being or object capable of giving rise to sentiments full of mystery and aesthetic emotions and included all things, superior or sacred, to which gratitude was owed.

The emperor, the ancestors, great generals, princes, rivers, trees, mountains and valleys were all kami; everything was divine. Shintoism has no clearly defined doctrine but expresses, in a broad variety of symbolic and ritual models, the system of values and the common lifestyle of the Japanese people as they were formed throughout the ages. The very concept of kami, rather than to indicate the thousands of beings of mythology, is to point to everything that inspires sentiments of respectful fear of nature. Natural phenomena and also human beings possess the nature of kami and are consequently, intrinsically good. All life passes in blessings and under their protection, in communion and accord with them, with a pure heart that knows gratitude.

This attitude implies that happiness is not to be understood as something of the future but rather of the present time. The inter-worldliness that distinguishes Shintoism leads the faithful follower to attribute importance to the harmony of each single moment and each single situation, guiding them towards fundamental optimism regarding the things of this world. Death is seen as a curse while life is celebrated with joy. The kami and the ancestors are invited to share in the joy and happiness of the living in a profound cosmic unity of man, nature, and divine beings.

Unlike the West, where knowledge is the chief means of reaching the truth, in Japan, at least in the religious sphere and starting with Shintoism, the prevailing tendency is one that does not distinguish the objective from the subjective or one’s own experience from that of others. Religious truth is, first of all, “that which one feels” and which it is difficult to share without reciprocal personal communication. Facts, imagination, and the beauty of nature are, for the believer, complimentary. Religious sentiment has its own distinct character. It avoids divisions and finds its security in the impartial distribution of the various religious practices, which invites tolerance and syncretism. The optimism and interiority inspired by Shintoism means thinking of God as not completely different from man, tending instead towards identification and participation. The gods are close; man does not feel alone or abandoned. The starting point of all this is the cosmological myth that, to overcome the chaos of the world, tells the story of the marriage of Izanagi and Izanami, the ancient divine couple that inhabited the rainbow and from whom were born all things and the innumerable divinities — among whom was Amaterasu-Mikami, the goddess of the sun from whom the emperors were descended.

In the Shinto tradition, respect and love for nature derives from a supernatural force that resides in natural things such as the mountains, trees and animals. The divinity of things expresses itself especially in beauty. Beauty is good; it gives rise to sentiments that are aesthetic and supernatural; it is a sign of interior purity and of loyalty in social relations. For this reason, the sanctuaries are aesthetically cared for and many of them are located on the tops of mountains. The most famous is Mount Fuji that, for its beauty, has become a religious symbol for the entire nation. Sanctuaries are almost always connected with natural phenomena. One of them celebrates a spring of cool water and has its entrance set up in a small lake at the foot of a hill. Another is formed by a hedge entirely surrounding a rock with only its point emerging from the sand.

Entrances to the shrines are always aesthetically cared for, have a symbolic value, and are made up of two vertical and two horizontal beams. In mountain temples, care is taken to observe the sunrise and to bathe one’s face in its first rays. The beautiful sand gardens of Zen Buddhism are a help to meditation.

In Japan, a country where diverse religions coexist, together with Shintoism we find Buddhism and Confucianism. The history of Buddhism begins in the 6th century, when Buddhist images and writings were introduced into Japan from Korea. However, most historians place the origin of “truly Japanese Buddhism” in the 12th and 13th centuries, marked by the birth of three influential movements: the school of pure Earth (lodo); Zen Buddhism, with its strong tendency towards monastic life; and the movement of Nichiren, a monk who lived between 1222 and 1282. Nichiren conferred a particular centrality on Lotus SiJtra and also recently inspired lay movements such as the Soka Gakkai and the Risshokoseikai.

In their various ways, these schools underline significant aspects of the Buddhism of Mahayana, “the great vehicle”. However, there is no shortage of forms of popular devotion that intertwine with and pass over the diversity of the many schools into which Buddhism is divided. Its influence is to be felt especially in the characteristic Japanese festivals such as that of the flowers, which commemorates the birthday of Buddha (8 April), and that of the forty-seven samurai, marking an event connected with loyalty towards their lord. Domestic altars, devotion to the dead and to cemeteries, the tea ceremony and the veneration of the bodhisattva, men of great moral and spiritual sensibility — all are to be attributed to Buddhism.

PreviousIndia: Mother Teresa, A Message For Our Times
NextThe Abbey of Étoile Notre-Dame, Benin: The Faces of Hope