The Abbey of Étoile Notre-Dame, Benin: The Faces of Hope 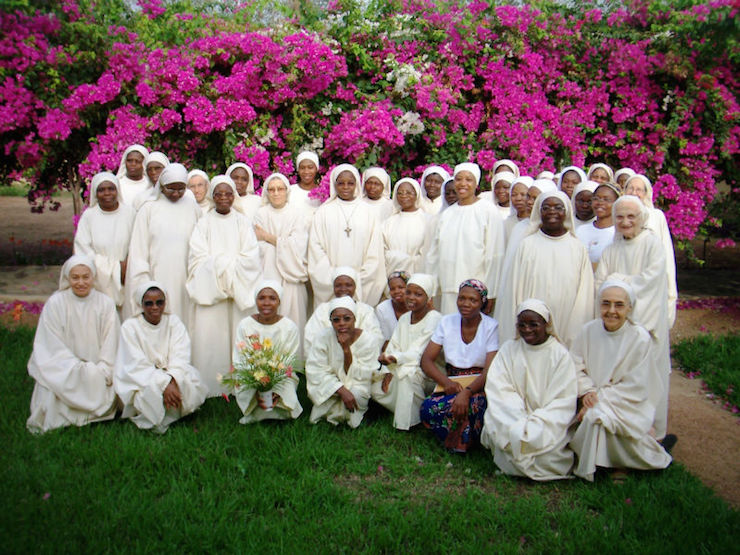 A community of 40 nuns from different nationalities; a melting pot of faith and prayers, where priests, religious and lay people can find the Benedictine monastic spirituality embodied in the African culture.

In 1960, seven French nuns of Notre-Dame des Gardes arrived at the Apostolic Prefecture of Parakou, which was founded in 1948 in the central-northern part of Benin. Two years later, they went on to found the monastery of Étoile Notre-Dame.

Six years after their arrival, the monastery became an abbey, due to the fact the number of perpetual professed sisters had significantly risen. Today, the abbey is home to an international community of religious women from Togo, Nigeria, Democratic Republic of Congo, New Caledonia, Spain, and of course France and Benin. Forty of these have professed perpetual vows, three temporary vows, and three remain as novices.

We met Sister Bibiane Igbaro, who, in July 1999, became the first native Abbess. She left office last January. She welcomed us with a smile and was willing to talk about her experience.  She explained that the community was ‘thriving’, but the most important aspect of this, being Cistercians, is the daily encounter with God.  She went on to explain that this is what held the community together, despite the diversity of their backgrounds. Many young women knock on the door of our monastery to join us.  They see that we are happy, despite the fact that we are not rich. Such a testimony of joy is a powerful attraction to religious life.

Mother Bibiane explained to us that when the first nuns arrived, there were just a few priests and religious people present at the Apostolic Prefecture of Parakou.  This was a land of first evangelisation.  The first missionaries — ourselves — operated in the field of the apostolate.  However, we chose from the very beginning to remain faithful to our contemplative vocation.

In 1964, the prefecture became a diocese, and in 1997, an archdiocese. Today the archdiocese consists of more than 50 local priests, 72 religious men, and 121 religious women. Catholics make up more than 200,000 in a population of 420,000. The current Archbishop is Monsignor Pascal N’Koué. The Abbey of Étoile Notre-Dame is increasingly a place of spirituality, of search for God; a place to listen to his word, a reference point for priests and religious men and women, and for many lay people of Benin.

The monastery is economically self-sufficient. The nuns do some craft activities and produce fruit juices, honey, and herbal medicines. They also raise livestock. The majority of fresh milk produced by the cattle is used to make yogurt.  Mother Bibiane explained that each nun has their own unique cultural legacy, which brought with it specific skills that could be used to better the community.

In Parakou, the nuns experience the embodiment of monastic spirituality in the local culture. The Abbess says: “Our cultures characterise each one of us and are represented in our daily life: in liturgy, fraternal relationships, work, and hospitality.” The French language, which is spoken by all nuns of the community, is used for the Liturgy of the Hours. However, in the moment of the Eucharistic celebration, songs are proclaimed to the Lord, each of them in their own language. Mother Bibiane further explained that the nuns pray according to the African custom, which includes gestures that better express words: we lift hands and we dance. The songs are accompanied by local musical instruments such as the kora, tam-tam, and balafon.

On holidays, offerings are brought to the alter accompanied by dance steps. The Gospel has not been adapted to Africa, but Africa has been transfigured, thanks to the African genius; the desirable and powerful seed of the Gospel of Christ.

Hospitality is extremely important in the Benedictine Rule, as it is in most African cultures. Mother Bibiane recalled that the dear departed Cardinal Bernardin Gantin (the then-Archbishop of Cotonou and supporter of the establishment of the monastery), used to tell all religious men and women that, before they were able to teach catechism, they were to heal the sick or to open a school.  Furthermore, they were to welcome all people who would come to pray.  However, the nuns soon found themselves in a predicament.  The poor of the area asked the nuns to provide them with medical services.  The bishop, therefore, allowed us to open a dispensary, not far from where we lived. We put some lay people in charge of the facility, which soon became a hospital not only for the poor. Some time ago we donated the facility to the diocese.

Mother Bibiane stated that the nuns received a strong sense of the sacred from local cultures.  This was particularly noticed during important stages of their religious life.  For example, the moment when parents bless their daughters on the day of their perpetual profession of vows; it is a strong feeling for those who receive such blessing. There are so many non-baptised mothers who offer their daughters to God with joy.

The Abbess hopes that the Gospel of Christ may play an important role in the life of monks and nuns in Benin and in Africa.  She explained that we live in a continent that is facing many problems that affect us all, but if we live according to the Gospel, we will be able to be witnesses of both today’s and tomorrow’s generations.

I hope to be able to show how to live following the example of Christ. I always pray to God to liberate our people from fears. I also ask God to give us a strong faith, in order to be poor in belongings, but rich in hope.

PreviousJapan: The Way of the Kami
NextNiger: Migrants’ Dreams Buried in the Sand