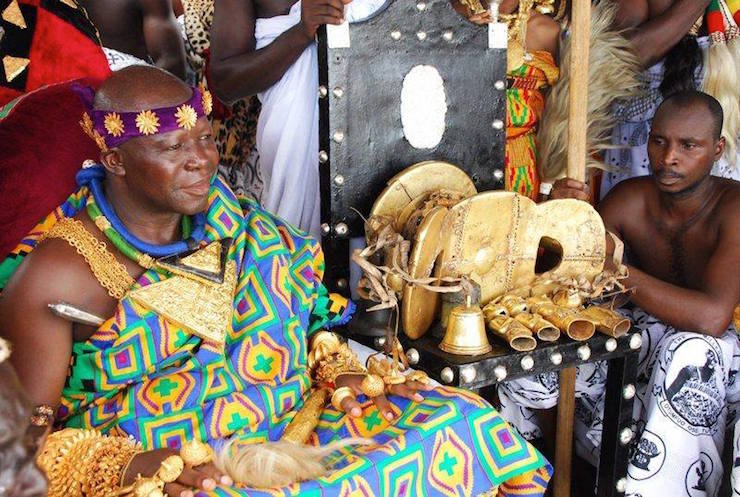 The Akan live in Ghana and in the Ivory Coast, in the area bounded by the Volta and Kamoe rivers.

The main object of their ancestors’ veneration is the sacred stool. It is in front of the stool that food, drink, and sacrifices are offered to the ancestors, and that the spirit of the founder of the kingdom is invoked – as if the stool were an altar. Usually, the base of the stool is concave and hollowed out. This is so it can receive the relics (teeth, hair, and nails) of the ancestors, as well as a gold nugget.

The nugget represents the spiritual fire and vitality of the ancestors. During the ritual, which is dedicated to the hands of the ancestors and to the protective spirits, the officiating patriarch places another nugget of gold on the stool. The sacred metal stays there all day, for the length of the ceremony. The patriarch keeps this latter nugget of gold, which is never sold or given away as a pledge. Its presence gives him respect, economic power, and moral and spiritual authority over family members and the kingdom’s subjects. The gold lends credibility and value to the oaths, prayers, and judgements made by the patriarch in the name of the ancestors.

Sometimes the altar-stool consists of solid gold, like the one of the Ashanti of Kumasi, called Sikadiuja Koffi, and that of Kouadio Adingra Kuman, King of the Abron-Gyaman Boundoukou. These gold cult objects symbolise the soul of the king, of the state, and of the nation. A local proverb states: “The king is mortal, the seat (royalty, state, and nation) is immortal.” The permanent and immortal character of the seat derives from its solid gold material, which defies the passage of time.

The origin of the Ashanti state dates back to the end of the seventeenth century, when a group of matrilineal segments gathered around Osei Tutu to combat the kingdom of Denkyra. The victorious Osei Tutu founded his capital, Kumasi, while the other chiefs who fought on his side founded their capitals about 30km away. The names of the founders were: Umasi, Juaben, Mampong, Kokofu, Nsuta e Bekwai. Their chiefs were inter-related, spoke the same language, and had similar political and religious institutions. Their union with and submission to the chief of Kumasi, Asantehene, was accompanied by two symbolic events: the burial of the ancient seats, symbols of their authority, and the appearance of the seat of gold.

The story goes that Sikadjua Koffi, the gold stool, came down from heaven on a Friday. All boys born on Fridays are called Koffi. When it came down from heaven, the seat placed itself before the monarch Osei Tutu in the presence of his famous sorcerer Konfuo Anokye, and the elders gathered in assembly. The official sorcerer interpreted the scene as a sign that the gods and the ancestors recognised Osei Tutu as their sole representative on earth. The event contributed to demonstrating King Osei Tutu’s divine nature, and to placing temporal and spiritual power in his hands. From that historical and memorable day, Osei Tutu became the sole head of all the Ashanti, monarch by divine right and high priest of the kingdom.

Today, the Ashanti are the only Akan who officially possess a solid gold seat. Three large and three small bells always accompany Sikadjua Koffi. Two of the large bells are of brass, and one is of solid gold. The three small bells are anthropomorphic and represent the effigies of three high-ranking warriors overcome by the Ashanti. One of these figures has his arms folded across his chest; the second has one arm on his chest and the other at his side; the third has his arms by his sides.

PreviousThe Garo People in India: Culture and Dances
NextSyria: Escaping War with the Bible Sewn Into A Blouse