Radio Zapata, Mexico: Weaving Communities from the Heart of the Mountain 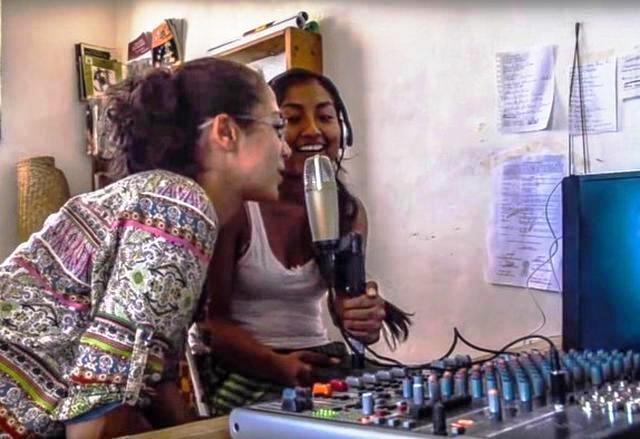 A community radio that tries to improve the living conditions of indigenous people through communication.

Mexico’s media monopoly generates multi-billion profits – but even worse, it imposes a single cultural pattern on the country, denying in this way the cultural diversity represented by the several indigenous groups in Mexico. This has often given rise to social tensions, such as those of 1994, when the EZLN launched an assault on military and police targets demanding work, land, shelter, food, health, education, independence, freedom, democracy, justice, and peace for the indigenous people of Mexico.

An environment of media monopoly interferes with the right to free expression of the Mexican indigenous people by eliminating viable alternative sites of communication, limiting direct access to media outlets as tools of communication, and preventing independent media outlets from emerging. In this context, community radios play an anti-hegemonic role by fighting for the right to communication, in order to disseminate and revitalise indigenous language and culture. Community radios, therefore, are the voice of resistance, which has been affirming the dignity of the indigenous people for 22 years.

Unfortunately, in Mexico and several other countries, the system discriminates against independent small broadcasters in favour of the state-owned and commercial outlets.

Radio Zapata 94.1 FM is a radio born in the community of Buena Vista, in the municipality of San Luis Acatlan in the State of Guerrero. It is the only ‘non-commercial voice’ of the inhabitants of this area, who actively participate in the radio’s work by investigating and disseminating relevant topics for the community. This community radio aims to provide radio programming in Spanish and various indigenous languages, with five basic objectives: to serve as a space for communication and community outreach; to revitalise culture and the Ñamnkué (Amuzgo), Na’Savi (Mixtec), Me’phaa (Tlapanec), and Nahuatl indigenous languages; to provide cultural and educational alternatives as means to eliminate violence; to promote the integral development of communities by boosting local consumption and production; to combat violence and discrimination against women.

Radio Zapata is located in one of the most marginalised regions hit by the structural violence that exists in Guerrero. Mexico’s reputation as one of the most dangerous nations in the world with the most sophisticated and violent organised criminal groups is upheld by the tragic events that occurred over the last few months, such as the disappearance of 43 students from Raúl Isidro Burgos Rural Teacher Training College in the town of Ayotzinapa, Guerrero State. Nine of them are from a region in which Radio Zapata covered the event extensively, broadcasting in the different indigenous languages of the 21 municipalities which are able to tune into the radio. Guerrero is home to the Nahua, Mixtecos, Tlapanecos and Amuzgos; each of these indigenous communities speaks its own native language.

In 2015, InSight Crime, a foundation dedicated to the investigation and reporting on organised crime, published an investigation on Mexican criminal groups that ‘unrelentingly feed the growing U.S. demand for heroin … In Guerrero State alone, between January 2013 and July 2014, crimes and violence forced more than 2,900 people to abandon their homes and leave’.

According to some experts, between 60 and 85 percent of the Mexican production of opium paste is supplied by Guerrero State.

Furthermore, for years, foreign companies have owned mining concessions of great size in Mexico. In 2012 the Mexican government granted 56.7 million hectares to transnational mining companies, which correspond to about 28% of the national territory. In Guerrero, this figure corresponds to 23% of its territory. About seventy-seven percent of the land is divided into indigenous communities or ‘ejidos’. Decisions about how to use ‘ejidos’ and other forms of communally-held land are made collectively, and adopted via general assembly. But beneath the ground, owned by the people who it sustains, are metals that are in great demand – primarily gold, silver, and copper.

A convergence of rising metal prices, favourable government policy, and technology has contributed to the rapid expansion of the mining sector in Mexico. Indigenous people in the Guerrero State have formed community policing groups in order to physically protect their territories from armed groups, including members of state security and irregular forces. Recently, these community guards have been facing increased repression from the Mexican government and paramilitary groups.

The CIPOG-EZ operates in this context. This organisation calls on the population to turn solidarity into concrete and visible action. In June 2015, hurricane Carlos destroyed much of the equipment and facilities at Radio Zapata, as well as the roof of the community health centre. In response to this situation, the community assemblies decided to rebuild the radio. However, up to now they have only been able to rebuild a small part of the radio’s equipment and the roof of the health centre through community volunteer efforts, and therefore it has been impossible to resume broadcasting.

Radio Zapata is the second link in the construction of a larger regional community project called the Casa de Saberes (House of Knowledge), which is aimed at solving various problems in the region through the strengthening of key areas such as access to health, the revitalisation of indigenous language and culture, access to information, and the protection of the historical memory of the territory and its several communities.