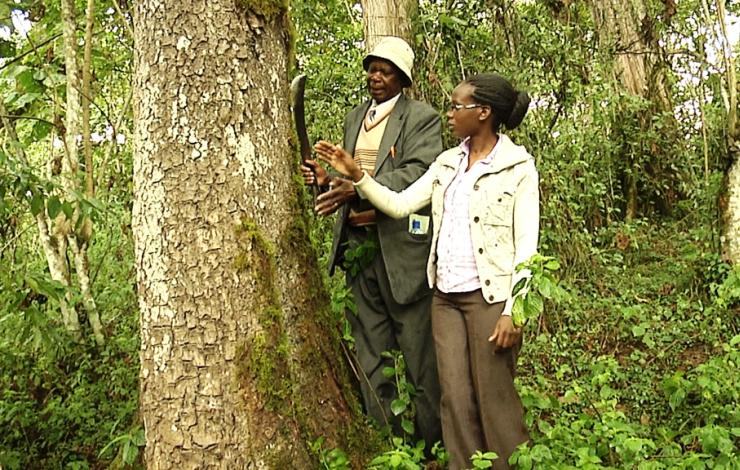 The prunus africana belongs to the Rosaceae family and is also called the red stinkwood tree. The plant is called stinkwood because its wood carries an unpleasant odour. The genus name ‘Prunus’ is derived from the Latin word referring to the plum family, and the scientific name ‘Prunus africana’ refers to the species of African origin.

This evergreen monoecious tree is native to Sub-Saharan Africa in 22 countries, including Uganda, Ethiopia, Kenya, Tanzania, Zambia, Malawi, Mozambique, and South Africa; but also in Cameroon, Nigeria, Sao Tome, and Angola, to mention just a few.

The wild tree species is found mainly in tropical forests at an altitude of about 900-3,400m above sea level. The mature tree is about 10-25m high with open branches, and the outer part of the bark is corrugated or rough, with a black to brown colour. The inside part of the bark is red in colour. The leaves are alternate and simple, between 8–20cm in length, and dark green on top and pale green on the bottom, with mildly serrated margins. The flowers are white in colour, and the fruits are spherical with a dull purplish brown colour, and about 1cm wide with a seed in each lobe.

Like other tree species from different parts of Africa, Prunus africana is called by different names in the different African language dialects. For instance, the Zulu of South Africa call it ‘Inyazangoma-elimnyama’, the Chagga of Tanzania ‘Mkonde-konde’, the Kikuyu of Kenya ‘Muiri’, and the Baganda of Uganda refer to it as ‘Entasesa’. In Afrikaans and the Kiswahili languages of South Africa and East Africa, Prunus africana is called ‘Rooi-stinkhout’ and ‘kiburabura’, respectively.

The Prunus africana tree species is easily propagated from freshly harvested seeds, which are planted in a well-drained growing medium. Generally, the seeds can take 50 to 90 days to germinate after planting, but the growth rate is rapid.

The plant can grow up to one meter per year in normal conditions. Currently, most seedlings of Prunus africana are obtained from the wild and planted in prepared gardens, mainly by the traditional healers or the communities that have used the plant for generations to treat and manage various health conditions.

The Prunus africana tree species has wide applications in African traditional medicine, where its leaves, roots and stem bark are used, although the stem bark of the tree is the main part that has been used for medicinal purposes by the African people since ancient times. The dull grey to brown bark is pulverised by the traditional healers and used to treat a number of health conditions, including Benign Prostatic Hyperplasia (enlargement of the prostate) among males over 40 years old, erectile dysfunction, urinary tract disorders, kidney disease, male baldness, stomach upset, chest pain, and inflammation.

The bark is also used in the treatment of stomach ache and wound dressing. Apart from the bark, the leaves of Prunus africana are also used to treat some diseases. An infusion of the leaves is traditionally used to improve appetite, and for the treatment of genital infection and hirsutism (a condition of unwanted, male-pattern hair growth) in women. The bark is also sought as an aphrodisiac to enhance vitality and sexual power especially among the males.

Despite its medicinal uses, Prunus africana is important in charcoal and timber production as well. Its use as timber is popular in the mining industry as pit props, in railway sleepers in the railway industry, and in bridge and other heavy duty construction work industries.

The multiple uses of Prunus africana for traditional medicine is not surprising, since scientific studies have shown that it has various bioactive substances with anti-inflammatory, anti-cancer, anti-viral, and anti-microbial effects. Some of the bioactive compounds identified in Prunus africana are triterpenes, sterols, coumarin, and flavanoids that have been known to have vital medicinal properties for the claimed health conditions.

Because of its overexploitation for health benefits, with less effort geared towards conservation, Prunus africana has been classified as a vulnerable species facing a high risk of extinction. There is increasing demand for the bark of Prunus africana both locally and internationally in African countries, for the production of herbal medicine for treatment of prostate cancer that is globally on the increase.

In fact, Prunus africana has recently come under heavy pressure in most African countries because of wild harvesting for the medicinal plant trade. This important tree is unsustainably harvested, since the bark of the entire tree is poorly harvested, leading to the death of the tree. Consequently, Prunus africana has been added to Appendix II of the Convention on International Trade in the Endangered Species of Wild Fauna and Flora’s (CITES) list of endangered species, for the regulation of its trade. Currently all exports of Prunus Africana are subjected to a CITES export permit, to protect the tree from depletion in Africa.