The Island of Lamu in Kenya: Keram, a Board Game 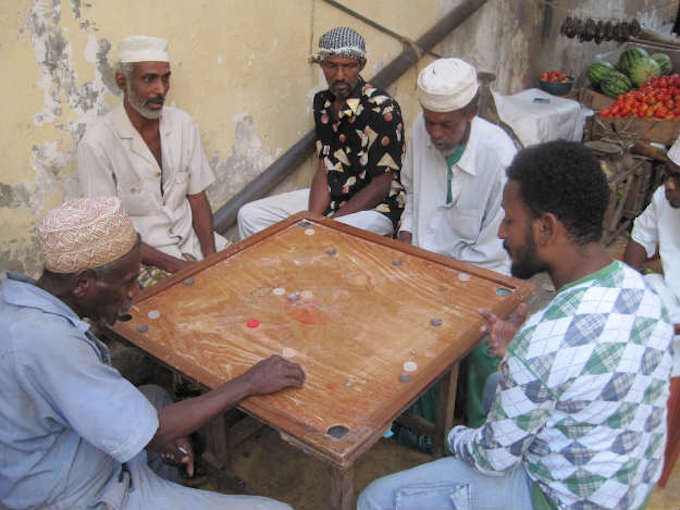 Under the shadow of the tamarind trees in market square, and in the adjoining alleys, scores of people turn to keram. A board game a curios mix of billiard and table shuffleboard. We look at the game.

Visitors to the island of Lamu, which is part of the Lamu Archipelago of Kenya, are always struck by the contrast between the laid back attitude of islanders and the hectic life around the waterfront. Fishermen are busy mending nets and preparing their boats; fishmongers are preparing to buy and sell the catch. An array of artisans is hard at work in their workshops. Yet when the working day’s work comes to a close, many of these people find their way in the backstreets of the small town. There, under the shadow of the tamarind trees in market square, and in the adjoining alleys, scores of people turn to keram.

This is a board game originally from India, where it is known as carom. It is a curious mix of billiard and table shuffleboard. It is now played on the shores of the Indian Ocean, but also in faraway places like the UK and North America.

The game is played on a square wooden board of varying size – usually 75cm long, but there are some as long as 1 metre. At each corner, there is a hole (pocket) with a net to collect the disks that fall into it.

The objective of the game is to use a “striker” disk with a flick of the finger, to make contact with and move lighter disks called “men”, which are thus propelled into one of the pockets. The disks are coloured to distinguish opponent teams. A red disk represents the Queen, which is the most powerful keram piece. When players set up the board, the Queen is placed at the centre. Pocketing the Queen adds points to the player’s total score.

To pocket Queen and men, players use a larger and heavier disk – the striker. Crossing the diagonal lines on the board by coming in contact with it, or pocketing the striker, is a foul.

A player committing a foul must return one man who has already been pocketed to the board. If a player pockets his striker, he has to pay a penalty. Talc powder is used to make the board smooth and so allow the pieces to slide at incredible speed.

There are many more rules, and perhaps some finer points in their disbursement; but as outsiders observing the game, they were not obvious to us.

Besides, one dares not ask too many questions, since the game is fast and players and bystanders compete for attention.

Keram is a social affair. The players are engrossed in the game but find the time to answer the jibes of spectators. Those watching the game, most of them waiting for their turn to play, comment on the latest throw or what should have been done; some jokingly pull the leg of a player, or highlight why things are not going well in his life.

The game is played by children and adults alike. However, while among children girls are admitted to the game in the streets, among adults one never finds a woman. We do not know if women do play in the privacy of their house. Certainly one does not see them even among the bystanders, as is the case for most public activities in this Islamic society.

PreviousChristians Before the Wounds of the World
NextMexico: The Huicholes’ Drum Festival