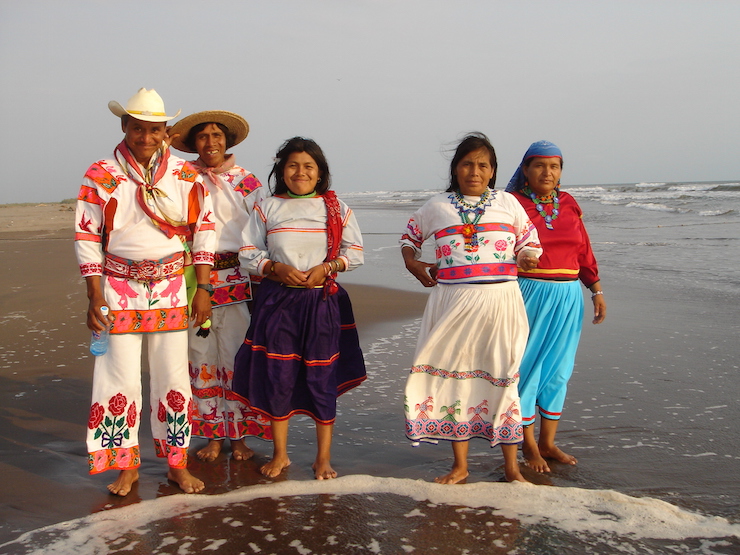 At the end of the rain season and after the harvest, the Wirraritari, as the Huicholes call themselves in their native language, thank their gods for their protection and generosity with a nightly celebration – a tradition which they have inherited from their ancestors.

The Huichol people are an ethnic group living in the Sierra Madre Occidental range in the Mexican States of Nayarit, Jalisco, Zacatecas, and Durango. On the occasion of the Drum Festival, when the sound of the tepo (sacred drum) is heard, people gather for the annual nightly ritual performed by their spiritual leader, the marakame (shaman).

The moonlight, the lit candles, and a huge bonfire create a magical atmosphere all around the place where magical rites, songs, and dances are performed, while the marakame thanks the several deities for the good harvest and the rains. He also asks the gods to solve the group’s problems, and to keep diseases away from the community.

At the beginning of the ceremony, two assistants of the marakame alternately play the drum which accompanies the prayers and songs, while some others distribute long sticks to the men and women who are seated in a circle around the bonfire. The sticks are then thrown into the fire and, according to tradition, the attendees are purified of sins once the flames consume the sticks.

The Drum Festival is one of the most important rituals in the life and customs of the Wirraritari. This celebration is performed to thank the gods for the gifts the Huichol people receive from Mother Earth.

While the others perform prayers and chants, the marakame asks the kakauyares – or deities – to continue to provide food and to keep diseases away from the community. His prayers are accompanied by the incessant sound of the drums and rattles.

The marakame is seated on a rustic armchair made of sticks and leather. A rattle and the Huichol ‘God’s eye’ – a sort of fan with coloured, worsted, yarn drawings – are placed at his feet. In the meantime, some men and women offer him cups of tejuino, a drink made from fermented corn masa, which is prepared by the women of the community several days before the celebration. The tejuino is a sacred drink among the Huicholes. Before drinking the tejuino mixed with a liquor, the marakame dips his finger into the liquid and then indicates the cardinal points.

The attendees perform five sessions of prayers corresponding to each of the sacred places located at the cardinal points which, according to the Huichol tradition, are North, South, East, West and Centre. The dances and chants continue until dawn.

The next day is dedicated specially to children. Early in the morning, the Huicholes set up an altar with the image of the Virgin of Guadalupe at the centre, and the Huichol ‘God’s eye’, the baton of the traditional Governor with ceremonial arrows all around it.

The Huichol ‘God’s eye’ is a yarn-woven spiritual object. It is woven with yarn and wood, often with several colours. This object is called ‘God’s eye’ because through it, the Kauyumali God may keep a watchful eye over the people who made it. To help the God see better, the Huichol people wove a pupil of black yarn or a mirrored disk into the god’s eye. Where the sticks cross, an opening is left, which allows shamans and gods to travel easily between the spirit and earth worlds. God’s eyes, also called sikulis, are considered to be like magic wands, and are used to bring health and long life to children and adults.

During the day, men and women leave their offerings, mainly corn, fruit, food, tamales, tortillas, candles, and tejuino, on the altar. And while the drum keeps beating and a choir headed by the marakame sings songs about the goodness of their gods and the respect and veneration the community owes to them, one of the marakame’s assistants puts some soot with the index finger of his right hand on the left cheek of the children between one and six years of age. This mark allows the gods to recognise the children and guide their spirit during the visit to the sacred places on that day.

In the afternoon, some offerings are consumed, while some of them are left on the altar for the gods that inhabit Wirikuta, the flat semi-desert at the foot of the Sierra Madre Occidental near Real de Catorce in San Luis Potosí. This is the Huicholes’ most sacred territory, and home of the famous peyote cactus. The Huichol people traditionally make an annual pilgrimage here from their homelands in north-eastern Nayarit, to gather the precious hallucinogenic cactus which they regard as essential food for the soul.

PreviousThe Island of Lamu in Kenya: Keram, a Board Game
NextUganda: ‘Imbalu’, the Pride of Bamasaaba