Uganda: ‘Imbalu’, the Pride of Bamasaaba 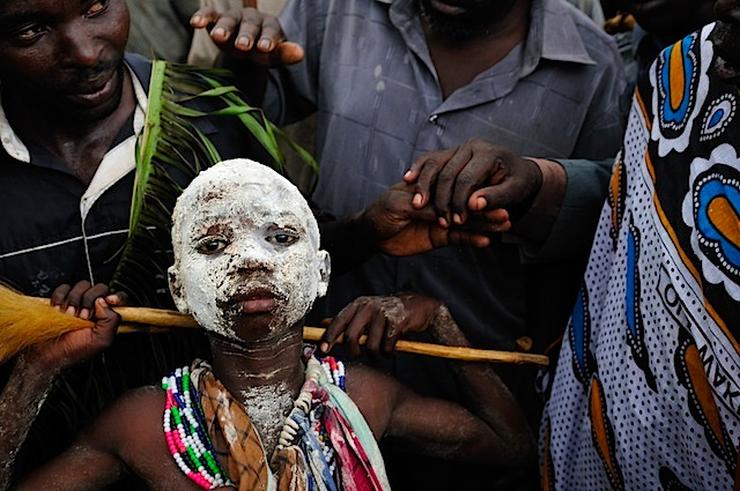 The Masaba people, or Bamasaaba, live in the Eastern Ugandan districts of Sironko, Manafwa, Bududa, Mbale and Bulambuli. They comprise about 1 million people. The Bamasaaba are famous for their traditional male circumcision ceremonies, held every even year. In a three-day ceremony of dancing and feasting, preceded by months of preparation, the initiates are admitted into adulthood and expected to begin their formal contribution to the growth of their respective communities.

The time has come. The Bamasaaba’s young men above the age of 16 are now preparing themselves for the ‘knife’, and parents with boys of this age are storing food in advance of the Ceremony. ‘Imbalu’, which means circumcision, is an initiation from boyhood to manhood among the Bamasaaba people of the Bugisu region in Uganda.

The ‘imbalu’ is carried out in stages. Usually a candidate is prepared just a few days before the actual ceremony takes place. Kamalwa (millet and banana) is brewed in large quantities, crude waragi is distilled in large quantities, and hundreds of livestock are slaughtered throughout this festive season. Family, clan members, and friends dance until the small hours every day until the ceremony is concluded, in order to boost the candidates’ morale.

Candidates are given instructions and coached on how to handle the pain they will experience during the physical operation. It is a three-day bonanza for the family, in which the ‘umusinde’ runs around with followers and well-wishers. In the final hours before the circumcision is carried out, the ‘umusinde’ visits the mother’s side, the ‘ibwiwana’, where he is given gifts like cows, chicken, goats, and money. The maternal uncles give gifts to their nephews while uttering words of blessings and urging the candidate to stand firm during the circumcision. It’s at this stage of the day that the dancing picks up. The speed of singing, drumming and dancing increases. The women wriggle and the men ululate and jump up and down as they escort the boy to the grounds where the ceremony is to be performed.

Circumcision day is performed in many different ways, but usually a male goat or bull is slaughtered in the courtyard where the candidate is to be circumcised. The animal’s heart is put on a stick and set up in the courtyard where the boy is going to stand. This is called a sacrifice to the ancestral spirits, the ‘Basambwa’. The candidate then receives instructions on the customs of his people and the duties expected of him as an adult man.

Prior to the ceremony, the people prepare the candidate to move to a sacred swamp, traditionally recognised by following a traditional path called ‘Luwando’.

The candidates are smeared with mud before going back to the courtyard prepared for circumcision. On reaching the courtyard, the candidate must stand straight and firmly on the sack, which participants achieve by holding a stick across his shoulders. He will find the ‘Umukhebe’ (local surgeon) already waiting, holding a sharp knife and ready for the operation. The moment the boy stands on the sack, the operation takes place. The circumcision takes less than a minute.

The ‘Umukhebe’ is considered one of the fastest surgeons. As the bleeding subsides, the men are directed inside a house, where the wound treatment takes place. Once the candidate has successfully completed the operation, the women continue dancing, singing and drumming, thanking the candidate for his courage and endurance. After the circumcision, the man is called ‘umusaani’ (denoting a man who has undergone circumcision). With improved medication these days, the healing process takes just two weeks.

After two weeks, the boys begin getting ready for another ceremony called the ‘Inemba’, which takes place at the beginning of the following year. The ceremony runs for three days and includes all the young men who underwent circumcision. They join together and dance, showing the community that they are now responsible members of the community. It is during this ceremony of ‘inemba’ that the young men traditionally find their wives.

PreviousMexico: The Huicholes’ Drum Festival
NextSouth Sudan: When Life Can Be Beautiful