Republic of Congo: Oil Does Not Flow for the Poor 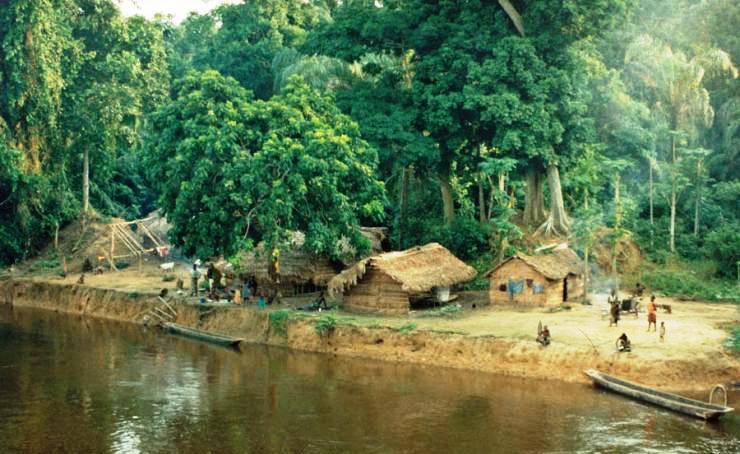 The Republic of Congo ranks among the top five oil producers on the African continent. The oil and resource extraction, however, has strained a parched landscape, caused deforestation, polluted rivers and impoverished communities – all while the profits of such activities enrich foreign companies and local governments.

Huge trees, tropical plants, and dense vegetation soaked with moisture surround the village. Nature here expresses, among tangled branches, vines and streams, its pulsating vital force. The people, however, do not look happy and carefree. A sad atmosphere is in the air. All the inhabitants of the village are sitting patiently next to a large tree, waiting for the meeting to begin. It is an important day for the community.

The reason is visible in the background: tongues of fire issue unceasingly from a high concrete tower, and thick black smoke rises to the sky. It is one of the gas flaring pits located near the sites of oil extraction, of which there are many in the country, and which seriously threaten the ecosystem of the region and the health of its population.

At first, the discovery of oil was welcomed as a blessing in Congo. Local authorities promised great benefits: jobs, economic growth, and wealth. But soon, the village communities realised that oil extraction carries with it pollution, poisoned aquifers, diseases, and more misery, while the economic benefits go to businessmen and local governments only.

The Republic of Congo is one of the top five oil producing countries on the African continent. Black gold represents over 90 per cent of revenues from exports – amounting to about $5 billion a year – and 75% of the total revenues of the country. Almost all oil production in Congo is run by foreign companies: the French Total, the Italian Eni, the American Exxon Mobil and Chevron Texaco, and some Chinese companies. Apart from these, some private enterprises, mainly from Asia, are engaged in other sectors of the mining extraction and other commercial activities, especially those related to deforestation and timber trade.

The mining industry has a serious impact on the ecosystem of the Congolese rainforest and on communities. According to the Diocesan Commission for Justice and Peace of Pointe-Noire’s (the second largest city) data, oil extraction in Congo in recent decades has led to an alarming deterioration of the natural environment, due to high levels of pollution. The poisoning of ground water in particular has affected fishing in the rivers, contaminated sources of drinking water, and caused soil acidification, with the consequence that land has become infertile and unsuitable for agricultural production. Air pollution has increased respiratory and lung diseases. Furthermore, several children who were born near mining sites show birth defects and need physiotherapy and kinesitherapy, and sometimes artificial limbs.

Besides the damage caused to the environment and the health of people, mining activities also affect the traditional lifestyle of the indigenous communities. Their rights to land are often violated. Too often, foreign companies, complicit with the Congolese government, purchase large lots of land which traditionally belong to the indigenous communities. Those communities living near the oil fields are forcibly evicted from their ancestral lands, which are enclosed and patrolled by armed guards. Then, the mining companies build access roads, drilling deep in the virgin forest to allow the transit of large trucks and underground oil pipelines, which carry crude oil to the port of Pointe-Noire. Finally, when it comes to hiring local labour, companies often select ‘urbanised’ staff, recruited in other areas of the country, since indigenous people are not considered qualified enough. Thus, the local communities, who have been settled on soils rich in oil for centuries, end up impoverished and marginalised.

As they say in this region, “oil does not flow for the poor” – meaning that the poor remain poor. The Republic of Congo, a country extremely rich in natural resources, remains one of the poorest in the world. Over 70% of Congolese live below the poverty level.

Finally, the meeting begins, under the big tree in the centre of the village. François, one of the inhabitants, asks to have the floor. “The oil extraction near M’boundi, our village, began in 2000. We were told that the new company would bring wealth to all. But soon we realised that those promises were not kept, and slowly things only got worse. The company has hired none of us, and now we are reduced to poverty. Some of us have been used as guards, at very low wages, with no contract. And if a person dares to complain, the next day they are told to stay at home”.

The other people of the village nod and François continues: “The state is selling the land to the oil companies, and we cannot prevent it. It is true, the companies have built a well, but what advantage can we have from it, if all the rivers around here are poisoned?”

Now it is Miriam’s turn, who is the mother of five children. “We can no longer cultivate our land; manioc does not grow anymore on our soil. We have been told that oil has nothing to do with this problem, that it depends on a fly that affects our crops, but how is it possible? Before the oil extraction activities started, the land all around was fertile; now plants die. In recent years the extractions have become more aggressive: we can feel that the smell has become stronger, and we are afraid for our health and that of our children”.

In the end, Mackosso Brice, Director of the Justice and Peace Commission of Pointe-Noire, speaks calmly but firmly. “We are committed to defending the rights of local communities and people’s health. Our attitude is not of absolute opposition to the mining companies, but they must respect the basic standards of environmental protection and human rights. We have seen in recent years the catastrophic damage to the Congolese ecosystem, and the deep collusion between foreign oil companies and the corrupt system of our government, so local people do not get anything, not even the crumbs of the billions coming from oil business.

“This is the truth, and I’m not scared of telling it out loud: I was arrested and kept in custody for defending the fundamental rights of our people. But I am not giving up.”

Openness and respect for the basic rules: in other words, this is an ethical issue. “The problem is that oil companies refuse to consult us; they do not operate transparently. They have not even informed us about the investment in oil sands, a very important issue with regard to the environmental impact and the health of local communities.”