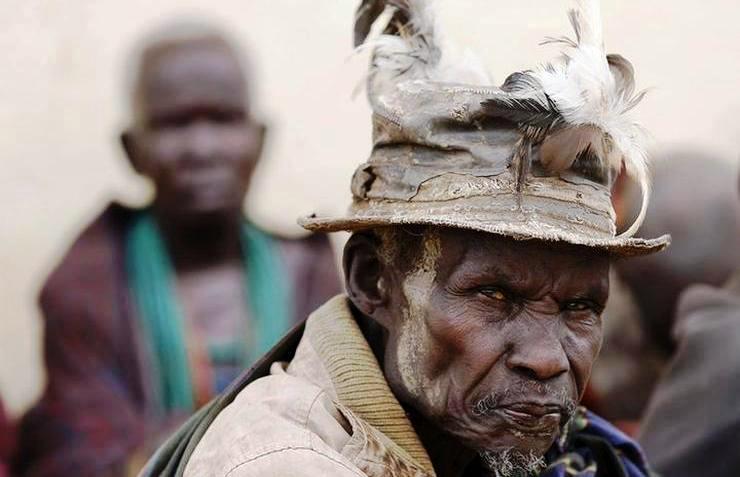 In the Karimojong group living in north-east Uganda, the prophet (ekadwaran) is an important figure. The status of prophet is the highest possible status an elder can attain, and therefore demonstrates the significance of the elder to his people.

Akidwar means to foretell and to prophesy; adwaris indicates a capacity to prophesy in a particularly accurate manner; and ekadwaran stands for prophet. The possibility of prophesying exists through God in dreams, or through personal contact with the prophet in secluded locations. Normally people dream of their dead and understand their message. But sometimes recourse to the diviner (emuron-ekerujan) may be necessary.

In the case of a prophet, it is God himself who causes the prophet to dream. Diviners’ dreams are also of divine origin. The difference between their dreams and the dreams of a prophet consists in the ability to control the facts dreamt, which only the prophet has. For this reason, their importance extends beyond tribal boundaries. They are revered, their help is looked for, and even members of other tribes who come to know them adhere to their prescriptions. This was the case of Ikwaibong, also called Ibongo, a member of the Lango tribe on the Sudan border who in the late 1950s was very influential in Karamoja, though he never actually lived there. It is said of him that: “He never grew old, he could not be injured by a spear or by a bullet, he could make rain with rain stones and could make sticks go into rocks. Once he lived near Lokoki (in Dodoz territory), and while he was there, there was prosperity and an abundance of crops. When he returned to his own nation, that prosperity ended.”

Another prophet remembered by the Karimojong is Apaongea, a Bokora, who in the 1940s exercised his powers for the benefit of all the Karimojong. American anthropologist Neville Dyson-Hudson reports: “Apaongea is remembered for his striking examples of ritual control of the environment. He prayed for rain in the late 40s at a public ritual, touched the tree at the sacrificial place with his spear, and it rained heavily for several days. I myself heard several astonishing facts attributed to him. This is one of them: his cattle used to move for grazing grounds without the help of shepherds, even during the dry season. They moved to the swamps of the Teso and came back by themselves, after several months of absence.”

A Comboni Missionary who spent many years among the Karimojong, Father Felice Farina, tells of a particular aspect of a prophet’s life. During his visits to the Karimojong villages, crowds of people were gathering around him, pressing him on every side. He felt uncomfortable, and the catechist, in order to help him out of his embarrassment, told him to say simply: “I vowed (ekengoritae)”. Immediately, people kept a reasonable distance from him. The reason of this behaviour is to be found in the fact that some of the prophets were known as persons dedicated to the divinity, to the extent of leading celibate lives and avoiding sexual relationships, something unheard of amongst other Karimojong. Therefore, they had to be highly respected.

Particular elders may be acknowledged as prophets, because it is believed that the deity speaks to them directly. As a result of divine communication, prophets can see future events and avert or encourage them, according to their benefit. In a sense prophets represent the ultimate extension of elderhood: their powers of ritual control are greater, and consequently so is their authority. Prophets are always described as old, even by the standards of elderhood.

The greatest respect and obedience are due to a prophet, for his intimate relationship with the deity means his blessings and his curse are potent. To offend a prophet is spoken of as doubly dangerous: not only may he curse, he may die before being begged to remove the curse, and the offender will never be able to alter his permanent misfortune.

The great diviners are supernatural. They could be called prophets, for though they too are doctors and are called night and day by the families of the sick, it is on the strength and accuracy of their prophecies that they rise to fame. Their job is to serve as God’s oracles. By their prophecies they make rain or cause dry weather, or bring health, disease, or locusts; or avert disasters to the nation, such as raids. Great diviners are too removed from worldly matters, too deep in their spirituality, to care about themselves. Their influence lay in their supernatural abilities, which, being below the surface of ordinary affairs, make people consider their opinions very carefully, try to do as the great diviners advise, and show profound respect for them. Even the enemies respect them – perhaps they most of all. Mediation with God is clearly in the hands of the elders, and even more so in those of the prophets, since their connections to God are by any standard the closest possible in the mind of the Karimojong.

PreviousRepublic of Congo: Oil Does Not Flow for the Poor
NextMexico: The Planting Celebration