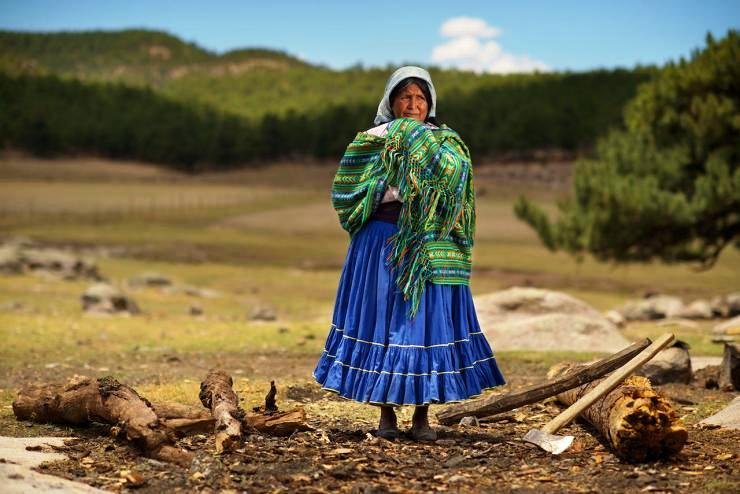 Mexico is a country that has venerated corn for many centuries. This is evident not only in the diverse dishes based on this grain, but also in the many enduring customs related to its worship. Here, we consider the traditional planting celebration.

Corn is the divine grain – a key component of the human myth of origin and of many good omens. Despite the diversity of rituals linked to corn’s agricultural cycle, it is remarkable how cultural and ethnic groups that are so dissimilar in every other sense can bear such a striking resemblance in terms of their symbolic discourse and ritual development.

The Huasteca is a region extending over at least six different Mexican states, and is inhabited by Nahuas, Otomies, Pames, Totonacos, Huastecs, and Tepehuas. There are surprising similarities in the different rituals performed throughout the region. They are often referred to by the Nahuatl term of ‘Tlamanes’, or custom. “According to certain inhabitants of Chilocuil, in the state of San Luis Potosi, the word may be translated as ‘thanksgiving'”. Tlamanes rituals are generally held twice a year: once with the arrival of the rainy season, when the corn is planted (April-May); and again at harvest time (October-November). The purpose of these ceremonies is, in the first case, to ask permission of the Lords of the Earth or the Lords of Below to plant the cornfields, and in the second, to thank them for the harvest. The idea is to ensure that the agricultural process will be carried out without a hitch, and with an abundant crop. In this region, planting and harvesting are carried out collectively, regulated by the tequio system – voluntary participation for the benefit of the whole community.

In Chilocuil, for instance, the owner of the cornfield invites community members to get involved, organising their participation in the ritual and in the fields. The guests include the immediate family, the extended family and those related to the owners by compadrazgo – a system based on the relationship between godparents. They all pitch in to organise and perform the ceremony. The ritual itself begins long before the ceremony does, when the owner extends his invitation to the participants, paying a visit to the guests’ homes so that together, they can decide on the role each guest will play in the ceremony. Participants may contribute in a variety of ways: by paying the musicians, for example, or else by providing food, drink, or other necessary ingredients for the ceremony, such as flowers, candles, tobacco, copal incense, liquor, seed corn, items for the offering, tools for planting, and so forth. Another ceremony may be held in the cornfield to request permission to sow; this is linked to a ritual petitioning for rain.

The preparations for the planting ceremony consist of preparing the land for planting and preparing the food that will first act as an offering and then be eaten by the participants in the ritual. The main dish is usually a large tamale called a patlache. It contains a whole chicken bathed in chino chili sauce and is wrapped in several banana leaves. Depending on the number of participants, up to four patlaches may be prepared, although many say the ‘proper’ number is two. A very small tamale containing the chicken heart is also made. It is attached to the patlache, before being offered to the land. It is known as the carguita, or ‘little burden’, and represents the cornfield’s food. Small bean tamales are also prepared, seven for every patlache. They accompany the offering until the participants eat them.

On the day of the ritual, people gather at a very early hour before an altar that has been set up at the host’s house for the occasion. It is carefully decorated with Catholic holy images. The rezandero – who plays a key part in the ceremony, coordinating all the activities and ‘communicating’ with the gods – initiates the prayers with a speech given almost entirely in Nahuatl. A young man called the hachero or copera is responsible for serving the liquor and also acts as the rezandero’s assistant. The sacred time of the ritual begins with an offering to the Lords of the Earth. The candlelight and the smell of incense give the house an air of solemnity and sanctity, briefly turning it into a place of respect, blessed by God. It is hoped that the gods will concede good fortune in the harvest, causing the arrival of the rains and thunder, and that the Lords of the Earth will watch over “our corn, the harvest, and everything there is”.

Music is another essential element in this sacred space: string trios composed of huapanguera guitar, violin and jarana guitar play songs that are almost purely instrumental. They are known in this region as canarias. Following this preamble, the participants make their way to the cornfield, which is primarily a space for men. They take along a provisional offering to be placed at the centre or heart of the plantation. It includes patlaches, liquor, flowers, candles, copal, firecrackers, farm tools, and the grain that is to be sown. Once at the cornfield, prayers resume, while food and drink are offered to the land: the small tamale containing the chicken heart is buried in a hole in the ground, cane liquor is spilled in the four cardinal directions, and copal incense is burnt. While some of the men make the offering, others begin sowing the corn. Once these activities are completed, all the participants are invited to enjoy a meal together.

Final prayers are offered to bless the equipment and ask for a good harvest. The ceremony, which lasts about ten hours, is then deemed complete, and everyone returns home.