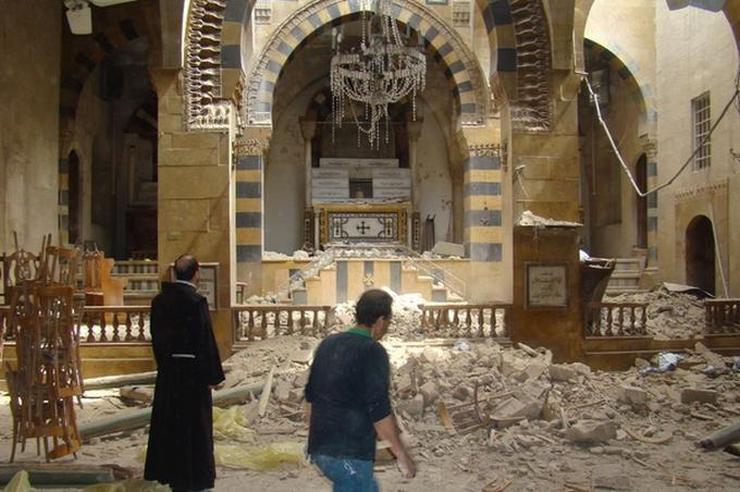 Syria was established in 1217. It is a Franciscan province, and has various parishes run by Franciscan fathers. Franciscan refers to those who adhere to the teachings of Saint Francis of Assi.

In recent times, Syria has been the recipient of continuous siege and bombardments. More than 2 million civilians are under of siege, 130,000 children are at risk, and while the Franciscan Friars continue to give hope, little remains of the city of Aleppo.

From the Em Ram monastery, you can see almost the entire city of Aleppo. The city is the second biggest in Syria, and was once declared a Heritage of Humanity in 1986, but after the fighting and instability, now little of the ancient citadel remains. It was once known as a place of coexistence – where Turks, Kurds, Arabs and Circassians existed side by side with 300,000 Christians of various denominations.

Aleppo was the third Christian city of the Middle East, and was simultaneously seen as the capital of the Islamic culture. It is a place of great archaeological intrigue, and a cross roads between the East and West. Having been under siege since 2012, now little of the city remains.

The war in Syria has been responsible for more than 287,000 deaths in five years. Furthermore, there are more than 6.5million displaced within the country, and 4.8 million refugees.

There is a Syrian proverb which says: ‘Who controls Aleppo, controls Syria’. The city is continuously changing power. The east is controlled by rebels who are backed by Saudi Arabia, Qatar and Turkey. It is attacked by the government, Lebanese, Shiite and Iranian Hezbollah, supported by the Russian air force. The government retains control of the western part of the city which is connect to the Assad area.

Father Firas Luyfti, who is in charge of the Franciscan monastery of Em Ram says:

“All interests in the Middle East are focusing on Aleppo. Every day we hear of truce talks, of agreements between governments, but then shootings and killings continue. We are facing a serious humanitarian catastrophe.

“But nobody seems to care. Who cares about the thousands of children who have nothing to eat? Who cares about the wounded who cannot be cured because there are no medicines? So humanitarian corridors are expected to be created in an attempt to bring relief to the population”

There are five Franciscan Friars in Aleppo, each of whom has been asked to leave the city several times. Father Firas Luyfti continues:

“The same reasons that push us to leave are those that make us stay. The Christians who are still here rely on us, they need us, and we need them. We are trying in every possible way to be close to all those people who relentlessly knock on the door of our convent, to receive some help and comfort.

“Our monastery is the place where different church groups gather for their weekly meetings. The reception that we try to offer unconditionally is implemented through the works of mercy that the holy Church asks us to do, especially in this ‘Holy Year of Mercy’. We also share with anyone who knocks on our door, the most precious good that there is now in Aleppo, the well water that we have in our convent.”

Aleppo is a “theatre of war” with its half-ruined houses, dilapidated buildings, and people walking the streets without destination. Fr. Firas says that offering these people food and water isn’t enough. They have lost their homes, and most of all, they need to recover psychologically. He says that the monastery has begun commercial activities to give people some work. They have also held school summer camps – the last one was attended by 350 young people – 100 more than the previous year. He said that when bombs began falling during the camp, their stereo speakers were pointed towards the jihadist areas to show “they wouldn’t succeed in frightening us”.

Sadly, the peaceful coexistence between Christians and Muslims in Syria no longer exists. There is no happy ending on the horizon. The war is not expected to end any time soon, and we will see more victims, violence and destruction.

PreviousTogo: The symbolism in numbers
NextCongo: Bishops plea for piece amidst new wave of violence