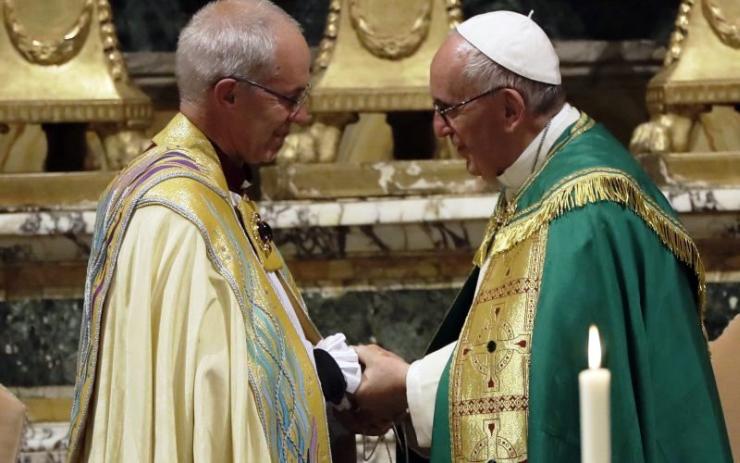 Pope Francis met on October 6th with the Archbishop of Canterbury, Justin Welby, and 35 Primates of the Anglican communion, to celebrate the 50th anniversary of the historic meeting between Pope Paul VI and Archbishop Michael Ramsey of Canterbury.

During the meeting, the Pope said: “It is a beautiful sign of fraternity to see the Primates of so many Provinces of the Anglican Communion joining here in Rome. We have solemnly celebrated the fiftieth anniversary of the historic meeting between Blessed Paul VI and Archbishop Michael Ramsey. That meeting has produced many fruits: we need think only of the opening of the Anglican Centre in Rome, the appointment of the Archbishop’s permanent representative to the Holy See, and the start of our theological dialogue. In sharing together these fruits, we remember that they come from a tree which has its roots in that meeting of fifty years ago”.

The Pope continued: “Reflecting on our continuing common journey, three words come to mind: prayer, witness, and mission. Prayer: yesterday evening we celebrated Vespers, and this morning you prayed here at the tomb of the Apostle Peter. Let us never grow tired of asking the Lord together and insistently for the gift of unity. Witness: these past fifty years of encounter and exchange, as well as reflection and common texts, speak to us of Christians who, for faith and with faith, have listened to one another and shared their time and energy. The conviction has grown that ecumenism is never an impoverishment, but a richness; the certainty has deepened that what the Spirit has sown in the other yields a common harvest.

“Let us treasure this inheritance and know that we are called each day to offer to the world, as Jesus asked, the witness of our love and unity (cf. Jn 15:12; 17:21). Mission: there is a time for everything (cf. Eccles 3:1) and now is the time in which the Lord challenges us, in a particular way, to go out from ourselves and our own environs, in order to bring his merciful love to a world thirsting for peace. Let us help one another to keep at the centre the demands of the Gospel and to spend ourselves concretely in this mission”.

Addressing Pope Francis, Archbishop Welby thanked the Pope for his example, leadership, and teaching on a wide range of issues, including poverty, human trafficking, and climate change. “Your letters and encyclicals have spoken far beyond Rome and her church, in a manner which is universal,” the Anglican leader said, while also lamenting “religiously motivated violence, affecting most, probably even all, of the great world faiths.”

“Secular values disregard the unborn, especially those with disabilities, and discard the aged. Facing all these perils, and a million more, is the body of Christ, the church, against which, as was promised to St Peter, the gates of hell shall not prevail.”

The Archbishop of Canterbury concluded: “In our disunity we grieve the Spirit of God, and we damage every aspect of our lives in Christ. Your Holiness, I ask that, as we have seen in these two days, despite those things that divide, we may be publicly determined to press forward where we may, together with all other Christians, especially those of the Orthodox world and the east.”

PreviousKenya: Marriage in the Turkana community
NextColombia: After the referendum, the Bishops promote a “culture of encounter”