Panama – The Black Christ of Portobelo 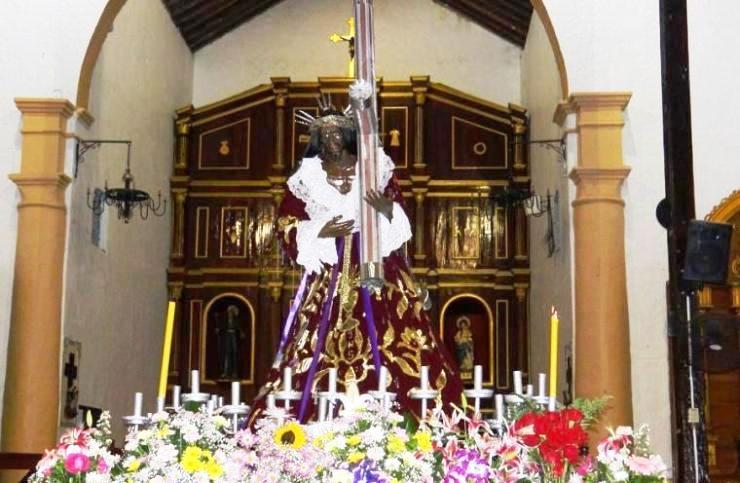 The town of Portobelo lies on the Atlantic Coast of Panama. It is a modest seaside village, squeezed tightly between thick jungle and the blue Caribbean Sea. The homes are made of clapboard and built around and among the ruins of what was one of Spain’s richest and liveliest ports from mid 16th to early 18th century.

Christopher Columbus discovered the port in 1502 and, fascinated by its natural beauty, named it “lovely port.” The town was founded in 1597 by Francisco Valverde and soon became an important trading hub. Portobelo is surrounded by well-preserved forts that are splendid examples of 17th and 18th century military architecture. The ruins were named World Heritage Sites by UNESCO in 1980.

Portobelo’s residents call themselves congos. They are descended from African slaves brought to Panama during the Spanish colonial era. The congos possess a rich folkloric expression that arose from African traditions and religions fused with Catholicism. Their folklore is expressed by their colourful costumes and devil masks, which they don during festivals such as Carnaval and the famous Black Christ festival, which it is held every year on October 21st.

The Iglesia de San Felipe is home to the famous “Black Christ”. The image, so well carved that it seems lifelike, appeared suddenly in Portobelo on 21st October 1658. According to tradition, an old black slave called Kichinbanchi was fishing on the beach of S. Pedro de la Escucha when he saw a big parcel floating on the water. He pushed it to shore and carried it into town. He opened it in front of a group of curious onlookers: it was a statue of Jesus carrying the cross, helped by the Cyrenian.

The people of Portobelo interpreted the finding of the image as if Christ himself had appeared to them to bring them solace and consolation, since they were suffering because of an incurable disease that was devastating the town.

Falling to their knees, they implored the Nazarene to end the terrible epidemic, promising to celebrate a solemn procession every year, on that same date. The epidemic stopped immediately and there were no more victims.

Nobody investigated the origin of the parcel, which most probably was among the cargo of a sunken galleon, a ship used by the Spaniards to transport goods. Since that event, which in popular devotion was considered a miracle, the vow has been carried out faithfully from generation to generation, on the 21st October of every year. Afro-Americans and peasants, more than the natives, found in the Black Christ the symbol of their lives’ and race’s aspirations and memories.

The cornerstone of the celebrations takes place on 21st October. It is a feast marked by a deep, shared faith. For the citizens of Portobelo, the Black Christ represents Jesus alive, living with them, sharing in their sufferings. And the people live in Him, identifying with the pain endured by Jesus on the way of the cross. To them, life is a long Calvary. They see Jesus as a pilgrim and they walk with him. During the procession people come out of their homes wearing violet tunics, their heads crowned with thorns. Some carry big or symbolic crosses, and walk alongside and united with the Black Christ.

Although the night’s imposing procession takes four hours, the distance covered is just a mile. The procession lasts from eight o’clock until midnight – exactly the time it took Kichinbanchi to carry the mysterious parcel with the holy image from the seashore into the town. Carried on the shoulders of more than 60 devout people, the image of the Nazarene advances three steps forwards and two backwards, rolled from right to left, as if on an ancient galleon, shrouded by the smoke of thousands of candles and a cloud of incense. The men carrying the Black Christ have shaved heads, wear purple tunics, and have bare feet. Being selected to help carry the statue during the procession is a great honour. The sight is striking and moving, with thousands of people swinging together with the statue. They form waves in a human sea full of courage and love. As the sun rises the following day, exhausted people lie on the floor of the church and just outside the church. Their faces are tired and darkened by the smoke of the candles. Yet they are satisfied and happy. They go back home with their spirits filled with memories and new promises to come back again next year.

PreviousBrazil: The Green Movement for the Amazon
NextTogo: The Wachi World