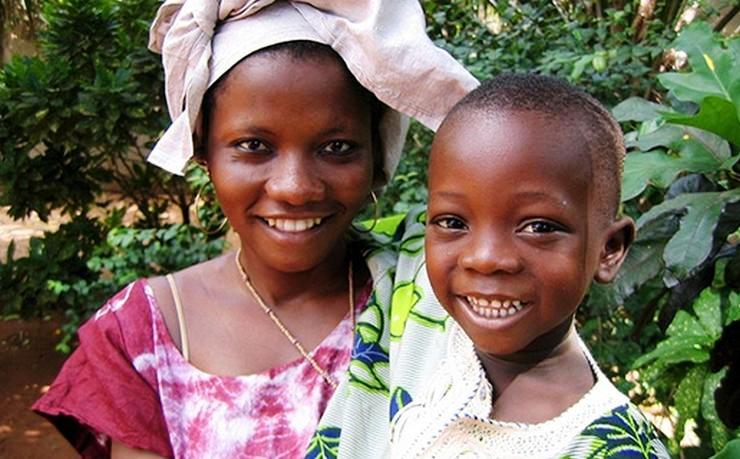 The Wachi are an ethnic group in the south of Togo. They are a people with a great variety of symbols, who are very religious. We take a look at their cosmic view.

The Wachi see the world as an organic whole, made up of four elements: earth, sky, fire and water. While water comes down from the sky (which is its container), fire comes from the earth but is connected to the sky by lightning.

Heat and coolness determine the times of the day. They are, however, also present in animals (which may be hot or cold-blooded), in plants and in rocks. Grass, plants and shrubs are called ama (lit. “legumes”), but some rocks may also be called by this term. Small meteorites fallen from the sky, for example, are “fire-bearers”; as are rocks containing iron. This mineral is used to make utensils and arms with which it is possible to “wound” the maternal earth or kill people. In this sense, arms and utensils are “connected to fire”.

Utensils connected with voodoo are, instead, called adanu (“instruments of rage”). This word recalls the adaha, the songs sung in particularly sacred times, so defined by their close connection with rage. This sentiment is located in the intestine. A person gripped by rage will say: «Me do dome dzo» (“I have fire in my belly”). Even other sentiments, less violent than adanu, are connected with fire but reside in the heart. An angry person will say: «Me bi dzi» (“My heart is on fire”).

Fever is explained by the presence of fire in a person’s blood. This “ardour” must find its culminating point (or crisis) before it can be “attacked” by water, to bring the blood back to its normal temperature. The sentiment of peace, on the other hand, is expressed by the phrase “coolness of the skin”, and it is ascribed to water.

Inherent in creation, this continual “conflict” conditions humankind which must have recourse to the rites of situtu or afladodo to restore harmony after a quarrel and regain a place in the community. Fire and water are found in many rites. Their “struggle” is ritualised but in such a way that it ceases to be a “quarrel” and becomes “integration”.

In the rite of ahwadagbe (“great celebration of fire”, come down from the sky by means of voodoo, hebiesso), the initiated approach the sacred fire and ask to be allowed to possess it to continue on earth “the great struggle of voodoo against the disgregators of social and cosmic order. It is the role of voodoo to guard this order so that humankind may not vanish from the face of the earth and that the sun, the moon and the earth may not “fall” from their “forks” in which they sweetly rotate, and “break each other to pieces”, causing the complete destruction of the cosmos. Even though engaged in a struggle, fire and water ask the human being to be nutifafà (“a bearer of peace”), so that the entire cosmos may find that same ‘freshness’ (peace) which they feel on their skin when water falls on it.

In the Wachi cosmic vision, everything is life and force but everything may also be a source of death. The forest is inhabited by elves (agé) and by whirlwinds (aziza), who may reveal the secrets of nature and its medicinal herbs, cause people to go astray or leading to madness and death.

The anthill, with its countless twists and turns teeming with life, is “the home of voodoo”: the numerous cavities recall the “cavity of voodoo” (the deep hole dug as a repository of all that makes up voodoo), in which it acts in absolute secrecy.

The savannah is “the place of the fire”, inhabited by monkeys, the totem of twins (they, too, are connected with fire). Living in a “pulsating universe” requires a knowledge of rules and the observance of precepts. One important aspect of the cosmic vision of the Wachi is the Pleiades. This constellation, bringing with it the “beneficial and fecund rains”, represents “continuous gestation” that gives to nature its fecundity and to sacred rites their efficacy. Medicinal herbs, gathered when the constellation is not visible, lose a great part of their curative properties. The Pleiades represent a concrete projection of the invisible universal mother known as bomeno (“mother of the world of Bome”). This world is to be distinguished from ghetomé (“the world of the here below” or “circle of life”) and from the fetomé (“the world of the ancestors”). The tomé (“circle”) is a perfect geometric shape because it is “closed”, like the “giant python” that surrounds the earth; it prevents what it contains within itself from going out.

The three voodoo worlds (bomeno, ghetomé e fttome’) form one large tomé, in which everything is complementary and integrated. The circle is also the symbol of tradition: forever true to itself, it cannot be represented by a straight line but by an uninterrupted circumference. In the celebration of the voodoo rites, it is emphasised that their efficacy derives exclusively from the fact that they are repeated in the same way as their ancestors used to perform them.

PreviousPanama – The Black Christ of Portobelo
NextEthiopia: State of Emergency