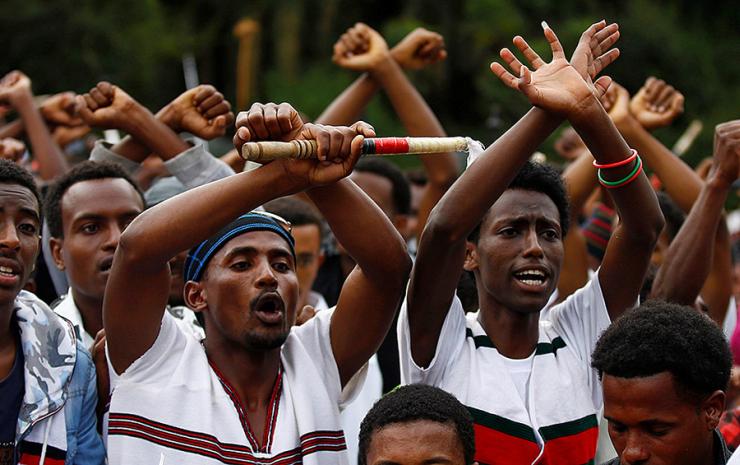 Ethiopia’s state of emergency has seen restrictions on social media and religious and political speech, as well as street curfews and travel bans.

The Ethiopian government has imposed the longest blanket ban on mobile internet services in the capital Addis Ababa since protests began a year ago. In addition, access to messaging platforms like WhatsApp has been heavily restricted. The measures are designed to stifle people’s ability to organise protests, and they come amid calls for greater political freedoms and recognition from the ethnic Oromo and Amharic groups.

The new rules even seek to ban people from carrying out certain gestures “without permission”. These gestures include crossing arms above the head to form an “X”, a political symbol that has become synonymous with the Oromo struggle, and featured at the Rio Olympics and Paralympics. According to the government, diplomats are not allowed to travel more than 40km (25 miles) from the capital, Addis Ababa, without permission “for their own safety”.

Ethiopian state media reported that 1,000 protesters have been arrested in the central Oromia town of Sebeta since the state of emergency was declared on 8th October.

According to local sources, an additional 1,600 people have been arrested in at least five places – including Shashamane, some 250km (155 miles) south of the capital, Addis Ababa, where 450 people were detained. Under the new measures, people can be detained without an arrest warrant for the duration of the state of emergency. The emergency rules include a ban on using social media to contact “outside forces”, and Ethiopians risk jail if they communicate with any “anti-peace groups designated as terrorist”.

Finally, the rules stipulate a curfew of 6pm to 6am, during which members of the public may not visit factories, farms and government institutions, which have come under attack in recent weeks. The UN Secretary-General Ban Ki-moon has urged the Ethiopian government to ensure “the protection of fundamental human rights” during the state of emergency, and the president has announced electoral reforms to reach out to protesters.

Fr Hagos explained that “the religious leaders in Ethiopia, together, made a request to the nation’s statesmen twice, on public media, asking the public and the government to solve this situation”. He also said the Catholic Church has led a 30-day prayer, starting on the Ethiopian New Year on September 11. It is also organising a ‘prayer for peace’ initiative, which will last an additional seven days. Father Hagos said that the Bishops’ Conference have been involved in an interfaith council of Ethiopia, which includes seven religious leaders belonging to Christian and Muslim faiths. He highlighted that members of the council are “continuously discussing this and we are hoping that people will be able to listen to one another. Maybe after listening, we can come to the main agenda of all of these issues we are trying to understand.” The roundtable he is helping to set up will “provide a platform for all the stakeholders to be able to voice their concerns and find a peaceful way to work towards a solution of dialogue and exchange”.

PreviousTogo: The Wachi World
NextComboni Missionaries in the Democratic Republic of the Congo: “Our concern over the worsening social tensions”