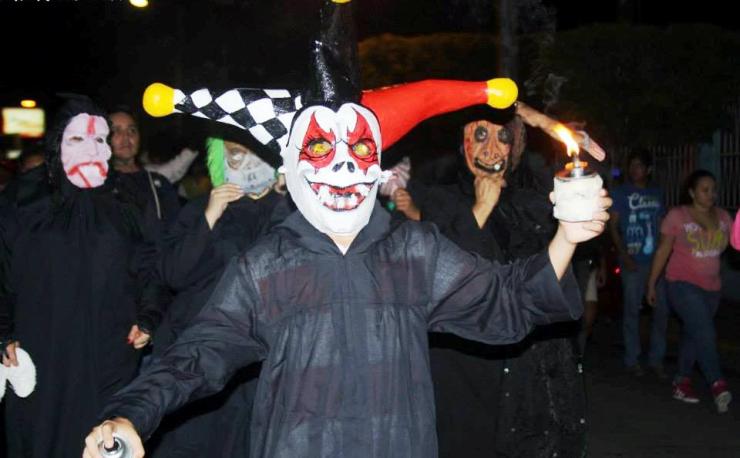 The Agüizotes Feast is celebrated on the last Friday of October. Ghosts, which have struck the imagination of children, young people, and adults for centuries, come out and walk about the dark alleys of the city of Masaya in the darkness of the night.

Los Agüizotes is the festival in Nicaragua where death comes disguised as a variety of characters from traditional myths and scary legends. Characters such as the La Llorona (the Weeping Woman), ghosts, and demons all roam the streets of Masaya, accompanied by marching bands and screams. This is a sort of Carnival parade that unfolds in a special atmosphere created by thousands of lit candles.

The festival takes place on the last Friday of October, in Masaya, the cultural capital of Nicaragua located 28 kilometres east of the capital Managua.

The name agüizotes comes from the word ‘güis’, a local bird which is believed to announce death. Therefore agüizotes means myths, scary legends, ghosts, or spirits of dead people who come back to life. “People on this occasion dress up in costumes representing several characters of legends and Nicaraguan folk mythology,” the Nicaraguan anthropologist Antonio Suazo explains.

When the sun goes down

The scary masks come out when the sun goes down, and take to the streets of Barrio Monimbo. The gloomy scenario is illuminated by hundreds of candles and handmade chandeliers, or by lamps carried by the participants in the parade.

The craftsmen of Masaya make the masks, which are the main feature of the festival. The masks are made from papier-mache, starch, plaster and paint. Some artisans also use horns of cows, deer and other horned animals to make scarier masks, which increase excitement among people attending the parade.

Jorge Iván Espinoza, a craftsman with 22 years’ experience in the production of the elaborate Agüizote masks, tells us that at the beginning, this event took place only in the neighborhood of Monimbo; but it then spread across the city, and now people come from all over the country and even from abroad to see it. Espinoza still remembers how scared he was when, as a child, he heard stories about mythological characters, such as La Cegua (the Witch), or La Llorona (the Weeping Woman). He recalls some residents claiming that they had bumped into “la cegua”, “la llorona”, or “la Carreta nagua” (a haunted cart that is driven by death and pulled by two skeletal oxen). Some of them met these characters at dawn, after a night of partying; others in the middle of the night.

The participants in this ghost parade gather in Plaza Magdalena, in the Monimbo district, and, disguised in terrifying costumes, start walking about the alleys at 8pm, howling, screaming, shaking chains, shooting fire and dancing to the sound of chicheros music. The alleys are lighted by torches, and by tallow candles carried by the participants. Coffins with cheerful skeletons also always feature at the parade, as well as beautiful young women disguised as vampires and devils.

In reality, the Nica Halloween begins the day before, on Thursday, with ‘La Vela del Candil’ – a traditional celebration that symbolises the forthcoming arrival of the night, when the mythical characters of different legends appear, such as the priest without head, and the mokuana (the witch).

The Toro Venado folkloric carnival is a sort of street theatre, in which the people dress in costumes to mock local politicians, public figures, and everyone else. This event follows the Agüizotes celebration and falls on the last Sunday of October. Other figures from Masaya’s folklore also make an appearance, such as the Los Aguizotes – people dressed as devils and other characters from popular legends. The carnival is part of the city’s annual patron saint celebration dedicated to San Jeronimo, which lasts for three months.

According to the legend, a farmer who was suffering widespread cattle losses offered San Jeronimo a procession, hoping that the Saint would solve his problems. In the end a dead tiger was found, and the farmer and his workers took to the streets to celebrate. They took the head of a bull and put two branches on it which represented the horns – hence the term “toro venado“. They disguised themselves as animals, while women offered flowers and sweets. “Over time, the typical wit of Nicaraguans turned this event into an occasion to mock the Spanish, and later people started to dress in costume to mock politicians, or other public figures”, the anthropologist explains.

During the celebration, dances with rhythmic movements are performed to the sound of cheerful music played by traditional musicians.