Mexican Catrina: A Celebration of Life 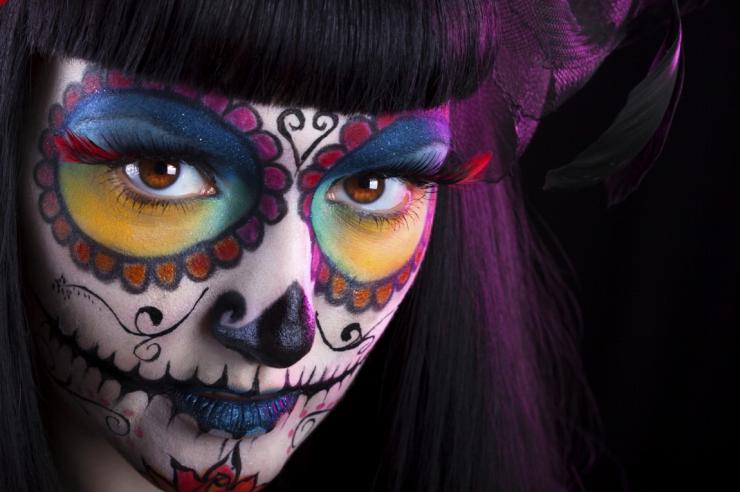 “Calaca’s taken him” is a Mexican expression that is used when someone dies. Also known as ‘Catrina’, a figure in high heels and a hat is the star of thousands of celebrations throughout the country in November. Here, we examine this character.

On the 1st and 2nd of November each year, Mexico celebrates ‘The Day of the Dead’. Indigenous and Spanish traditions come together in a series of events where people pay tribute, pray, sing, cry, laugh and above all, recall and celebrate the lives of those who are no longer here.

31st October, internationally known as Halloween, is ‘All Saints Eve’ in Mexico. From this day, altars are adorned with flowers, food and colour, in an open invitation to loved ones to visit the dead.

1st November is All Fool’s, or The Little Angels Day, which is a day primarily for the children. Tributes are paid to the deceased, with offerings adorned with marigolds, which are believed to have the power to attract souls, and skulls made of sugar. This illustrates the poetic way in which Mexican culture sees death — with humour and hope.

On 2nd November, celebrations then move to the cemetery and graves are decorated with flowers and things that the deceased used to enjoy: tequila, mezcal, pulque, atole, nuts, candies, coloured paper, incense, photos, candles and many ‘Catrinas’.

There is also the famous ‘dead man’s bread’, which is only baked around this time of year. It is a sweet bread, which is then decorated with bones, Catrinas, and often has a weeping bread ‘tear’, which depicts the goddess Chimalma, who cries for the living. The bones and dead man’s bread are arranged in circles, representing the life circle.

All these objects symbolise the opening-up of communication channels between the past, present and future. The dead are believed to come and eat the spiritual essence of such offerings.

Many people believe that the objects connected with the Day of the Dead bring good luck, and that those who have died come back and laugh and cry. Mexican parties are held in celebration, with dressing up, makeup, and face paint, as well as dancing, singing and musical instruments, all of which represent the good time that comes after death. Catrinas, a central feature of the party, can be made of clay, wood, leather, metal, seeds, chocolate or sugar. The most important part is that they look elegant and always have a big, flamboyant hat.

The life of the Mexicans

Whilst the origins of these celebrations are obscure, they are believed to come from an ancient Aztec festival which honoured Mictecacihuatl, goddess of the dead, queen of the underworld, and guardian of the deceased. While they may have evolved, with new customs and traditions adopted, the festivities are said to be over 3,000 years old.

The skulls, for example, have their origin in the trophies of Aztec and Mayan warriors, which were sought after as symbols of death and rebirth.

In 1913, the famous Mexican printmaker, cartoon illustrator and lithographer José Guadalupe Posada made a now widely famous metal engraving of Catrina. The artist, wanting to interpret the life and social attitudes of Mexican people, used Mexico’s traditional Day of the Dead celebration as his central theme. He staged scenes with skeletons in working class barrios, in suburban communities, and in the houses of the elite classes. Riding on bicycles and dressed in the latest finery, Posada’s skeletons became metaphors for the corrupt elite class, and ‘La Catrina’ came to life.

The word ‘catrina’ is the feminine form of the word ‘catrín’, which describes someone coming from a working-class background and striving to lead an aristocratic lifestyle. ‘Catrin’ is also slang for elegant or well dressed, referring to rich people.

Today, Catrina is the great Mexican character, well known and adored by all, especially during the month of November each year.

PreviousThe Maasai in Tanzania: “They are asleep”
NextBenin: How much does a funeral cost?