Benin: How much does a funeral cost? 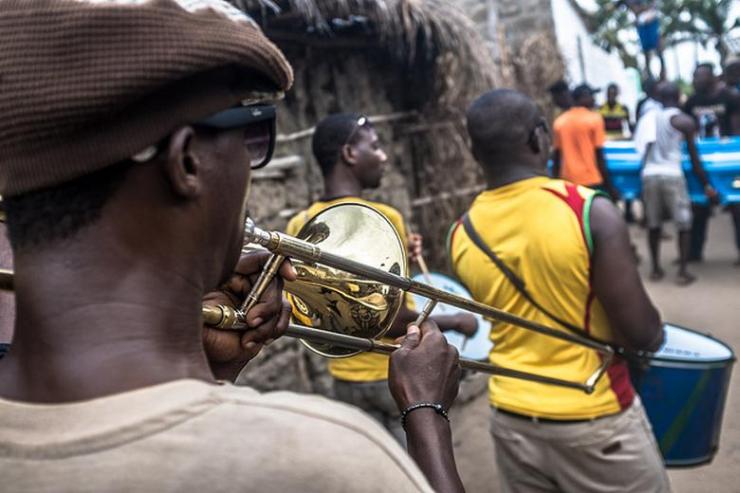 Over the past twenty years and each week from Thursday afternoon until Saturday at dawn, the roads leading to Cotonou in Benin become the stage for deeply felt and increasingly expensive funeral practices.

A long procession of cars which follow two police motorcycles with sirens wailing escort a hearse, some cameramen film the parade and a band play religious music at full volume in a pickup truck. This is usually how family members in Benin accompany the deceased to their native village for burial.

Some bearers may carry the casket on their shoulders and at other times, the coffin stays in the hearse. All the relatives of the deceased then get out of their cars when they reach the village. Those attending the funeral wear new clothes made or bought especially for the occasion. Participants then follow the casket according to kinship and relationship with the deceased, whilst the band continues to play both traditional and religious songs.

These kinds of funeral ceremonies are deeply felt by citizens both living in towns and those from the countryside. “Everything is so well organized the band.. the music … what perfect atmosphere!”, said a relative of the deceased.

Hountondji Nestor, Babakè, the founder of a funeral band which performs in the capital of Benin, said: “People think that you are in straitened circumstances or that you did not love the deceased enough, if you do not hire a band for their funeral.”

Perplexities arise when we consider the reality that families in Benin often go bankrupt and live in debt long after performing the burial rites of their loved ones. Funerals in Africa tend to be much more expensive than weddings and the farewell to loved ones has become very costly.

Families of the deceased, among the other expenses, must pay the charges of the mortuary where the corpse is deposited for weeks, sometimes for months, as it is common tradition to wait for the arrival of relatives residing in distant places. In addition, the relatives are expected to provide food for the guests and everything else needed in order to organize a funeral which is worthy of the rank of the deceased and that of their children.

The funeral band, despite being expensive, is an essential element of African funeral ceremonies, as people that it is important to accompany the deceased in a solemn manner because the loved one deserve to be respected and honoured. “We honour the deceased by creating a solemn atmosphere, we walk along with relatives. The band draws people”, says Babakè. Modern funerals have become a business.

Further, funerals are public events, where families compete for prestige and respect by showing off wealth and by publicly conforming to norms of solidarity and respect for the dead. Many weeks and sometimes even months, as well as a large amount of money, is spent on organizing the event in order to impress everyone.

It is also true that rituals are always moments of aggregation and sharing, especially in Africa. The entire family pays for the funeral expenses, in one way or another.
“Everybody must contribute to the expenses. Even the richest of families are not supposed to pay for everything; every single member of the family must do their part. A funeral is a social and collective ritual”, says Dah Aligbono, member of the Council of the traditional leaders of Benin.

He believes that families face all these enormous expenses (new clothes, the band, food for relatives and friends) and even go bankrupt, not in order to observe traditions, but to show off wealth to the others and to themselves. “If they knew and observed traditions correctly, Aligbono underlines, they would limit funeral celebrations to the essentials. People need to be educated about true values and our real traditions.”

PreviousMexican Catrina: A Celebration of Life
NextPope Francis: “I am ready to visit South Sudan”