Pope Francis: “I am ready to visit South Sudan” 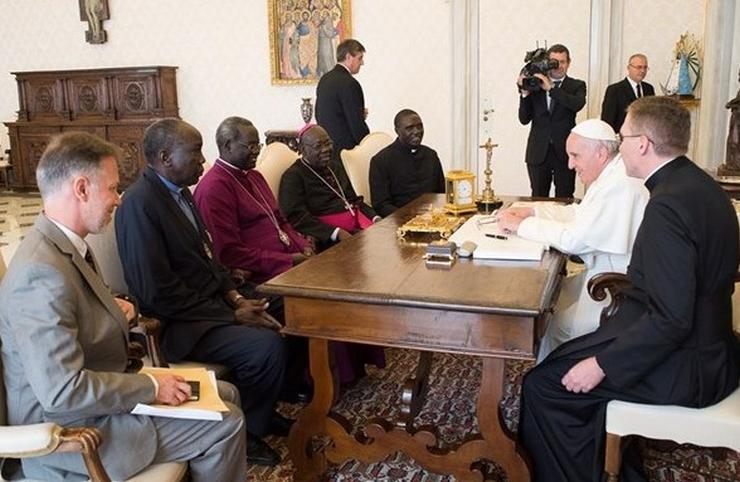 Church leaders in South Sudan have urged Pope Francis to visit their war-torn country, alongside the Archbishop of Canterbury.

Catholic and Anglican bishops from South Sudan, alongside a Presbyterian moderator, met with Pope Francis in the Vatican and urged him to help peace efforts in their homeland.

The Pope called Comboni Archbishop of Juba, Paulino Lukudu Loro, the Anglican Archbishop Daniel Deng Bul Yak, and Peter Gai Lual Marrow, Moderator of the Presbyterian Church, to visit Rome in order to hear about the joint work of the churches in the country.

Archbishop Lukudo Loro said that the Pope was interested in visiting South Sudan, particularly as he had met the country’s President Salvator Kiir in Uganda last year, and the President is said to be very much in favour of a papal visit.

The Pope said that he was “ready to come to South Sudan”, according to Archbishop Lukudo Loro. He explained to Pope Francis that the country is in dire need of humanitarian assistance and the attention and care of the international community. He hopes that the Pope and other Christian leaders will help raise awareness of the critical situation facing the people of South Sudan. The Pope had previously said that he was contemplating a visit to Africa next year, but that it would be “dependent on the political situation.”

Archbishop Deng Bul Yak discussed how the church leaders urged the Pope to try and broker peace talks between Kiir and Machar, something which could potentially happen during a papal visit. He stressed that a visit from the Pope would have added significance if he was to be joined by the Archbishop of Canterbury, Justin Welby, who has already visited South Sudan and has previous experience in reconciliation work. “A visit will mean unity. If the two leaders of two major faith groups could come and ask for peace, that would make a big impact on the country,” Archbishop Deng Bul Yak said.

Archbishop Lukudo Loro said that he had urged the Pope to appoint a resident papal ambassador in South Sudan in order to strengthen diplomatic peace efforts. There is currently a nuncio to both South Sudan and Kenya, but he lives in Kenya.

The Archbishop added that if Pope Francis was to come to the country, rebel fighters would “leave the bush” and put down their weapons for the Pope.

Finally, all parties reiterated their willingness to journey together and work with renewed hope and mutual trust. Drawing from the positive values inherent in their respective religious traditions, they would hope to lead the way by responding effectively to the deepest aspirations of the population, which desperately desire a secure life and a better future.

Since it became an independent state in 2011, South Sudan has had to deal with vast amounts of inter-ethnic fighting. In 2013, when President Kiir accused Vice President Machar of plotting against him, a civil war began. The subsequent peace deal, which was reached in 2015, has been violated by the fighting. According to the United Nations Office for the Coordination of Humanitarian Affairs (OCHA), since December 2013 this conflict has devastated the lives of millions of South Sudanese and displaced more than 2.3 million people. Around 1.6 million of them have been displaced internally in South Sudan, and over 600,000 are refugees in neighbouring countries. In addition, over 200,000 civilians are living in the six ‘Protection Of Civilians’ (POC) bases provided by the United Nations Mission in South Sudan (UNMISS).

PreviousBenin: How much does a funeral cost?
NextLove the Earth as Yourself