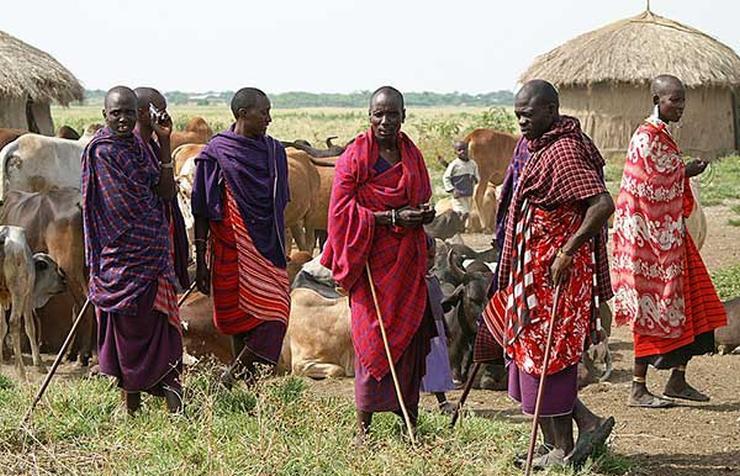 One of the main characteristics in the life of Maasai is the ‘Eunoto’ ceremony – drinking milk and becoming elders. Here, we will look at this event.

The Eunoto ceremony, which signals the passage from the state of warrior to that of elder, involves the ritual of drinking milk. Beer is brewed in a pristine calabash and the mother of the warrior, who will also attend the ceremony, stores the milk. When the beer is being brewed, warriors will come to the settlement and two elder maternal uncles, belonging to the godfather-group, are called to give the warrior his milk.

In the early evening when the herding is done, the two elders and the warriors gather. The warriors are given milk to drink with the twig of a wild olive tree. After, a little bit of the milk is then placed in a small gourd and poured into a small calabash with curdled milk and a some water. The drink is then given to the warrior. In turn, the warriors bring the drink to the elders, so that they can bless it. Those belonging to the Olotuno circumcision-group and the other office bearers are first given milk to drink and then this is opened up to all members.

The warrior at the centre of the ceremony sits right inside the main bed, dressed in a black cloth, whilst his mother stands near the bed. One elder is dressed in a cloak and he holds the milk for the warrior. At first, the warrior refuses the milk, until members of his family give him cattle.

When the warrior knows that his whole family and his fellow warriors will give him cattle, he goes on to drink the milk. He sips the milk four times whilst the elder holds it out to him, after which he is given it to him to hold himself and to drink until satisfied. The warriors then sing and dance, while the elders are given honey-beer. When it is time to go to sleep, the warriors go outside and leave the one who drank milk so that he can sleep in his mother’s house in between the two elders of the godfather-group.

The morning after, when the early red dawn spreads, the mother of the warrior gets up and raises a bull which has not yet managed to catch a cow. She also takes up some dung but allows the first amount to slip through her fingers, and holds on to the rest. She has a small gourd in which places the urine of a small ox and a goat. She then takes this to the house to keep it, before giving the milk to the cattle.

The evening before, the two elders had come with a stick of an aromatic bush pulled out by the roots, having stripped stripped off the leaves leaving a few near the top. They then stuck into the gatepost on the left as one enters the settlement. In the morning, they rise and remove that stick and give it to the warrior who is to be an elder in the kraal and they place this for the warrior along with the white stick of an entopisianoi-tree, so that there are now two.

While the cattle are in the kraal and the gate is still closed with some thorn-branches, the elders and the warrior enter the cattle pen holding a small stool on which white chalk is powdered. They hold the top of a calabash with sweet milk in it and also put the urine of the young bull and the goat on the stool, along with the dung of a bull, which are then all mixed together. The warrior’s face is then anointed covering both his cheeks. His right shin is also anointed in blessing. The words are: Be favoured in cattle and people; this is at the blessing of the face. Then they say to him: May children put bracelets on you, boys as well as girls; this is at the blessing of the foot. And his sticks are anointed with the words: Be matched, the sticks of the boys and of girls. At this, everything is mixed together: white chalk, milk, urine, dung, beer.

This is called ‘olkupelia’, the big blessing by which the warrior becomes an elder.

Once ‘olkupelia’ has been performed, the cattle go out of the settlement, as well as the the warrier, who goes out amongst the cattle and beats three calves with a special stick, beginning with a bull and then the other cattle. When the cattle have been struck, he sees them off for a while before returning into the settlement, where he is shaved again. The next morning he goes out with the cattle for four days. And with this the ceremony of drinking milk is over.

PreviousLove the Earth as Yourself
NextMariachi: The Soul of Mexican Music