Mariachi: The Soul of Mexican Music 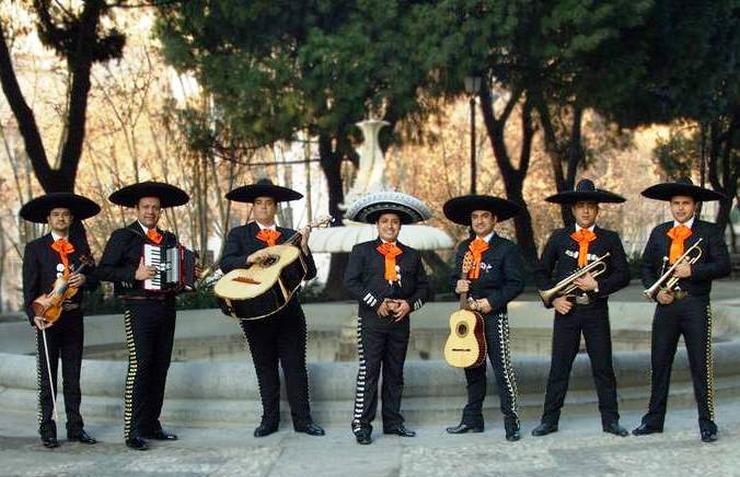 It was declared part of the Intangible Cultural Heritage of Humanity. The Mariachi is truly Mexican and is its most famous symbol. It is the soul of Mexican music. The songs reach out from generation to generation, to all Mexicans wherever they may be.

The musicians dress in typical charro style, usually in black or white. Their large sombreros are especially striking. Initially composed only of men, many of these orchestras now include women and with some include only women. The essential instruments are the vuelha, the guitar, the bass, the violin, and the trumpet. Some add other instruments such as the flute, the harp, and the accordion.

The original Mariachi idea dates back to the XIX century and the western part of Mexico in the states of Jalisco, Michoacán, and Nayarit. It is now found all over the country as well as in other nations.

The origin of the name

At first, these groups performed regional songs and then they increased their repertoires with rancheras, corridos, huapangos, sones jarochos, waltzes, and Mexican boleros. Today they also include universally known compositions.

Internationally, there are orchestras in Venezuela, Colombia, El Salvador and in the United States due to the numerous Mexican immigrants. At present, the International Meeting of Mariachi and the Charrería is held in Guadalajara and attended by groups from many countries.

As to the origin of the word Mariachi, there are various explanations. The most widely accepted is that it comes from the French word for marriage, “mariage.” According to this version, during the French invasion of Mexico, some of the French soldiers arrived at a wedding celebration in Jalisco and were entertained by one of these musical groups.

When they asked what the celebration was, they were told it was a wedding and it was from there that the name Mariachi began to be applied to this type of orchestra.

Some of the best-known songs performed by the Mariachi are: Cielito Lindo, María Bonita, Beautiful and Beloved Mexico, Adelita, and Las Mañanitas. Others include The King, Wonderful World, Ay Jalisco Do Not Weep, Son of a Black Woman, Amorcito Heart and Turn, Turn, Turn, to name but a few.

The Mariachi shrine is in Mexico City in the popular Garibaldi Plaza where, from morning to night, every single day, many of these groups gather. There, Mexican and foreign tourists come to meet them, listen to them, or hire them to perform at a celebration.

The Plaza is in the central north of the capital. It used to be called Plazuela Jardin and later, El Baratillo. In 1921, it became Plaza Garibaldi, in honour of the grandson of Giuseppe Garibaldi, José “Peppino” Garibaldi. In 1911, he fought alongside Francisco I Madero during the Mexican revolution.

One of the most popular feasts is celebrated in honour of St Cecilia, patroness of musicians. There are many activities – including the taco. During the most recent celebration, the largest taco in the world was made, being 50 metres long.

Whilst eating a spicy taco “al pastor”, which is a corn tortilla with pork and chilli, Pedro Ortega, a guitarist in one of the bands said that Mariachi is “pure Mexico”.

UNESCO declared Mariachi part of the Intangible Cultural Heritage of Humanity on 27 November 2011. During the meeting of the Intergovernmental Committee on Protection of Intangible Heritage which took place in Bali, it received the unanimous vote of the participating countries.

This is the seventh such award given to Mexico. The awards include: The Indigenous Festivities in Honour of the Dead (2008); the Ritual Ceremony of the Flyers, Veracruz (2009); Living Traditions and Memorial Sites of the Otomí-chichimecas peoples of Tolimán, in Querétaro (2009).

In addition, there is the Pirekua, a traditional song of the P‘urhépecha (2010) and the Parachicos, the January festival that takes place in Chiapa de Corzo (2010), as well as Traditional Mexican Cuisine (2010) and Mariachi music with strings, songs, and trumpets (2011).