Burundi: A Place For Remembering 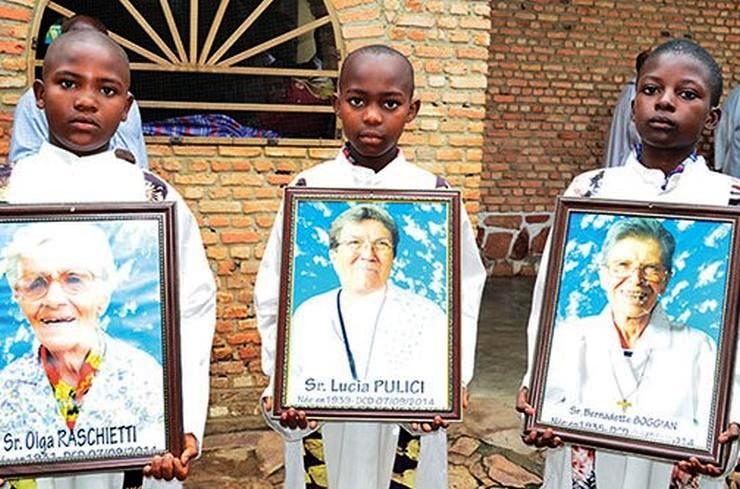 Many initiatives have been implemented during the Jubilee Year of Mercy. One being the establishment of the ‘Chapel of Mercy and Peace’ in Kamenge, a district of Bujumbura where two years ago, three Xaverian missionary sisters were killed.

On the front door of the chapel, written in the Kirundi language, is: Agasengero k’ikigongwe (Chapel of Peace and Mercy).

This place was the home of Olga Scrapers, Lucia Pulici and Bernadette Boggian, the three Italian Xaverian missionaries who were killed two years ago in Bujumbura, the capital of Burundi.

People who enter the chapel are enfolded in an unusual tranquillity. The memory of the three sisters is alive, their portraits hang on the walls, the only walls of the house left since the others were knocked down. They were knocked down not only for structural reasons but also to symbolise the collapse of division, hate and bitterness so that absolute forgiveness and reconciliation can be achieved. People write on pieces of paper, which are gathered into a basket, prayers for the intercession of the three nuns.

The Italian Xaverian, Father Mario Pulcini, who was one of the first among those who rushed to the scene of the massacre that afternoon, says: “We, the people who saw the massacre that was perpetrated, will always carry a wound which can hardly be healed. We continue to suffer for the massacre of the three nuns.”

Father Mario recalls the tragic event: “It was a Sunday afternoon when Sister Bernadette went to his office asking about sisters Lucia and Olga. Father Pulcini and Sister Bernadette went to the nuns’ house where everything was locked up and all the curtains were drawn. The gatekeepers had not seen them leave the building. Sister Bernadette opened one of the service doors on the side of their house and upon entering found the lifeless bodies of sisters Olga and Lucia. The civil, military, judicial and religious authorities were told immediately. The police arrived to inspect the scene and it was decided that some agents would stay to guard the mission. The other nuns decided to sleep in the residence despite the tragic event.”

“Around midnight”, Father Mario recalls, “the nuns called me again; they were afraid the aggressor had returned to the house. I rushed there, entered and went round checking the rooms: I found Sister Bernadette lying on the floor in her room, she had been killed, just like the two nuns the previous day”.

Father Mario still cannot find any reason for such a bloody murder to be committed against elderly women. The small community of the Xaverian nuns in Burundi is mainly engaged in health care, and active in human promotion (especially of women). The investigation was closed several months ago. An alleged offender is in jail. But there are still several questions that need to be clarified. “We want the truth,” says Father Mario.

Since the day the nuns were found dead, people have continued to gather in prayer at their chapel in order to continue their memory and to witness the presence of the God of Peace.

Father Mario says: “We therefore decided to turn that place of death and violence into a place of peace and reconciliation. It was decided to call it the ‘Chapel of Peace and Mercy’, and it will be home to anybody who is in search of meditation, peace and quiet”. The chapel will be a place for remembering all those who gave their lives for peace in the African Great Lakes region of Africa.

At the entrance, there is a big banner where the faces of other martyrs in these lands of Africa are drawn, those of the Xaverian missionaries who were killed in 1995, Ottorino Maule, Aldo Marchiol, Cathine Gubert, of the Apostolic Nuncio, Mons. Michael Courtney, who was killed in 2003, of the forty seminarians of Buta, killed in 1997, and the faces of the Bishops Joachim Ruhuna and Christophe Munzihirwa, both killed in 1996, one in Burundi and the other in the Democratic Republic of Congo.

Father Mario explains: “We didn’t want a sanctuary, but rather a resting place for the soul, especially for religious men and women, many of whom are considering promoting some moments of silence and reflection to invoke peace and beg forgiveness for all those who believed or believe that peace can only be achieved through the use of arms, violence and murder.

“The chapel will be home to all our people, to the poor, the weak, and the wounded in spirit by too much violence, as well as to the Catechumens who are preparing themselves to receive Baptism and the sacraments of Christian initiation. The example of those who gave their lives for a Reign of Peace must be the source of faith, peace and forgiveness for everybody”.

Father Mario concludes, “I invite whoever committed that massacre to come here, to this Chapel, to kneel, pray and ask for forgiveness. He will receive forgiveness, he will be joining us in prayer, and the truth will allow our three sisters to rest in peace in the arms of the Lord. God and Pope Francis this year have taught us the value of mercy.”