Benin: Dancing With The Spirits 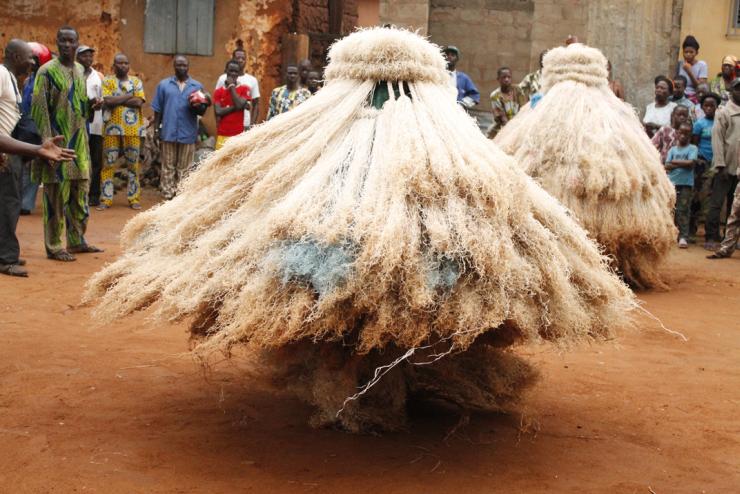 The desire for protection and justice takes on non-human appearances – the guardian of the night.

The Pla, an ethnic group of fishermen, live in Gbecon, which is a small village on the banks of the Mono river in southern Benin. These people are particularly devoted to the worship of Zangbeto, the guardian of the night. ‘Zan’, in fact, means night.

The Zangbeto mask is very tall and covered with coloured straw. It represents wild non human spirits – the forces of nature and of the night that inhabited the earth before human beings. Zangbeto comes out in the darkness of the night making an eerie humming noise to announce his arrival. He has a deep and guttural voice. He dances by spinning around, he jumps high and then crawls like a snake. This performance guarantees protection against thieves and malicious people. He wanders around the streets bestowing justice. The feature of this mask can be explained by its mythical origins. In fact, according to the legend, Zangbeto and his two brothers had been fighting against each other for the throne of their father when, the night before the final battle, Zangbeto, who led a small army and was besieged by the other two brothers, had a vision: a supernatural presence suggested that he and his soldiers cover themselves with straw and run against the enemies pretending to be spirits. The trick worked: his two brothers got scared and ran away. The youngest brother became the new king, Zangbeto.

The legend enhances the figure of Zangbeto, presented as a liberator and a protector of the weak. Zangbeto therefore came to be worshipped. Over time, despite his main work taking place at night, Zangbeto started to make appearances during the day also, in order to show everybody his powers.

Zangbetos make their appearance when the worship minister, Zangan, who stands in front of a house, starts to call by name several Zangbetos. Four Zangbetos then come out of the house, each of them wearing a different headdress made with horns and pieces of leather. This ritual takes place in a public place where people gather. Some musicians play drums, horns and gongon during the Zangbetos’ performance.

The most venerated voodoos in the village are Heviesso (lightning), and Sakpata (smallpox). The other two Zangbetos are called ‘the strength of youth’ and ‘the great power’. Each Zangbeto is accompanied by at least two Gbetovis, the night-watchmen’s children, young initiates of the local Zangbeto secret society.

The four masks move forward slowly, lining up in front of the crowd accompanying the ritual with songs. In a corner, the elders of the village preside over the order and procedures of the ceremony.

First of all, some corn-based food, cola and sweet drinks are offered to the legba, the protector of the village. The offering ritual is called dexixo. Everyone in southern Benin begins the celebrations with the food offering to the legba. After the offering, the Zangbeto’s bow down before the legba and ask him for protection so that the ‘village cleansing’ of evil can be successful.

After this comes the spectacular moment of the performance. Each Zangbeto, who is accompanied by his Gbetovis, reaches the centre of the courtyard and starts dancing and swirling around; the Gbetovis stand nearby and indicate to the Zangbetos the direction to follow, while they use a stick to keep people away from the masks. The Zangbetos (the human haystacks), the voodoo guardians of the night, spin hypnotically. Their spinning around is believed to have the power to cleanse the community of evil, and to ward off malevolent forces from the village. The performance proceeds among chanting, beating of drums and singing. At the end of the dance, the Zangbetos line up in front of the assembly.

Nobody moves but people continue to sing, until a member of the Zangbetos’ secret society standing in the centre of the courtyard, announces that the moment of nujle (miracles) has arrived. Some initiates are then supposed to perform magic tricks to prove the presence and the power of Zangbeto. If the magic tricks succeed, then the cleansing of evil in the village will be successful too. Some of the initiates wrap themselves in cactus leaves, pressing them against their chest, showing that there is no shedding of a single drop of blood.

Some break beer bottles, shattering them into glass crumbs, and then swallow them.

Before the performance, the initiates kneel before the Zangbeto asking for protection. They stand inside of a circle whose circumference is marked with corn flour mixed with palm oil. A line is drawn from the circle up to the Zangbeto, symbolising that the initiate is in a special area, which is under the powerful influence of the mask.

At the end of the magic-trick performance, the crowd thanks Zangbeto for proving that his presence is real and effective. Then, everything is silent. People stop dancing and singing, the band stops playing the drums. One can only hear the dialogue between the Zangan and the Zangbeto. This is the peak of the ceremony. Zangbeto has danced, has cleansed the village of evil, has proved his presence through the magic tricks performed by the initiates. Now he is asked to show his identity.

Who is behind the mask? Who makes it move? Who makes it powerful? In Benin, the belief is widespread that there is no man under the mask, but an empty construction is empowered by a spirit.

The crowd calls ‘Zangbeto’ seven times, with the mask at the centre of the courtyard. Four Gbetovis bow down at the feet of Zangbeto and after the seventh invocation they suddenly lift it, showing that under the mask, there is just a small pile of leaves left on the ground, and a frog jumping on it. The crowd shouts with joy. Zangbeto has made his appearance once again. Now he can go back to his hiding place where he will stay for some time, until the moment the community needs him again. The crowd disperses.

No one seems surprised that Zangbeto made his appearance in the guise of a frog. Sometimes he also appears in the guise of a snake or a bird. The people of this community are convinced that it was the frog that made the Zangbeto mask move and dance throughout the ceremony.

Why is the Zangbeto figure still relevant today among this community? Probably because this ethnic group, the Pla, needs protection and Zangbeto is a voodoo that acts as the night-watchman in their village. It’s no surprise that his face is not human, in fact, it is often an animal face, because Zangbeto is supposed to dispense justice, and justice must be impartial. A night-watchman regarded as a spirit seems to be more effective than a human-being fulfilling that task.

Zangbeto symbolises the justice for men, not men’s justice. This is his strength, and this is why this figure is still greatly worshipped.