Radio ‘Voice of Peace’: The Radio Station of the Nuba People 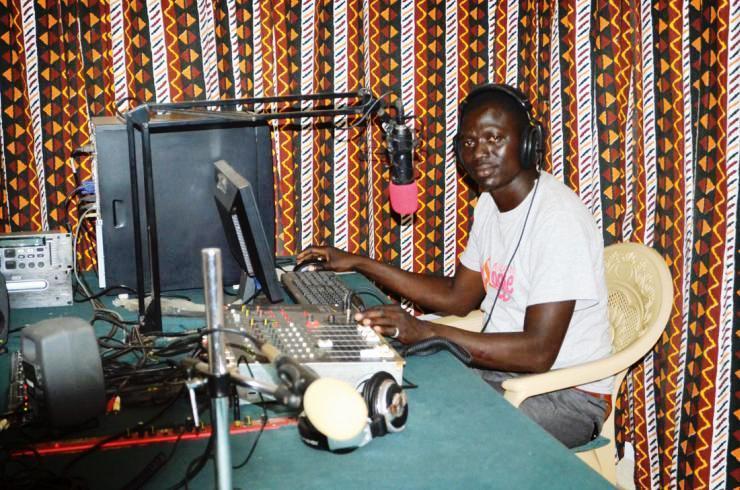 Radio ‘Voice of Peace’ has managed to capture the attention of the Nuba population and has become an instrument of peace and development enhanced by the Catholic Church in the area.

As the plane descends, one can see numerous white spots dotting the monotonous marshy landscape of South Sudan. The Yida refugee camp, which is home to 70,000 people, is just 12 kilometres from the border with Sudan. It is managed by the High UN Commissioner for Refugees (UNHCR), with the collaboration of NGO’s for development. The camp has already reached its maximum capacity. Another camp, therefore, has been set up nearby, in Unity State, to receive people who are fleeing the ongoing violence in the Nuba mountains of Sudan. Yida is also the logistic centre of the Catholic Church in the Nuba mountains. From there, humanitarian aid is sent to different missions. During the rainy season, from June to September, food security is particularly at risk in this region. Following the signing of the Treaty of Peace between North and South Sudan in July 2011, when South Sudan obtained its independence from Sudan, the World Food Programme (WFP) ended its flights to Sudan and the transportation of food through uneven roads now takes much more time than by plane. As well, travelling on land is only possible during the dry season, from December to June.

The border between North and South Sudan is marked by a rope attached to the tops of two poles which are stuck into the ground. When the truck with which ‘Catholic Church’ is written arrives at the border, the soldier patrolling the place kindly greets the driver of the truck and allows the vehicle to cross the border. The road runs up and down the numerous hills scattered throughout the region. There are many checkpoints in the area, and from time to time the Khartoum government launches airstrikes against the troops of the Sudan People’s Liberation Army-North (SPLA-N), which struggle against the Khartoum government. Both the Mother of Mercy Hospital and the Church schools have often been military targets. These attacks show the Sudanese government’s intention of eliminating the population of this region to put the area under the government’s control. The efforts by the African Union and peace mediators to stop the war in the regions of the Nuba mountains, Blue Nile and Darfur have failed since the outbreak of hostilities, in June 2011.

In June 2016 the Sudanese President, Omar El-Beshir, declared a four-month unilateral ceasefire in Blue Nile and South Kordofan and renewed the call for the opposition forces to join the National Dialogue process. Sudan rebels, for their part, also wanted to lay down arms for some months mainly, as they stated, in order to show a gesture of good will to save the displaced people and refugees in the war zones, until the peace negotiations begin in the Ethiopian capital, Addis Ababa.

The Catholic Church plays an active role in this war context with concrete and decisive actions. The ‘Voice of Peace’ radio station was created in 2009 to serve as a tool for the evangelisation and the diocesan pastoral project. The basic target of this initiative is the promotion of training, information and the strengthening of participation.

As a consequence of the war, the region suffers a high rate of illiteracy. The radio provides listeners with informal education, as well as information about the prevention of diseases. The ‘Voice of Peace’, in addition to English and Arabic, broadcasts in several local languages and now, six years on from when the radio first started broadcasting, improvements in knowledge and the prevention of several diseases have been observed.

The ‘Voice of Peace’ also broadcasts a weekly radio show which covers issues affecting women. Debates over polygamy, teen marriage, or the low school attendance of girls are also promoted by the radio. Over the past few years, information has contributed to increase the number of children attending schools.

In July 2015, the radio signal was broadened by installing a solar powered transmitter on the top of a hill, close to the radio station location. Getting enough power for the radio is also a challenge, since the orography of the region does not facilitate a clear transmission of the FM signal. Now, the ‘Voice of Peace’ programmes can reach new communities.

The communication through the Catholic radio network supports and completes the work of the Church in evangelisation projects in sectors such as education, health and pastoral action, as well as commitments related to justice and peace.