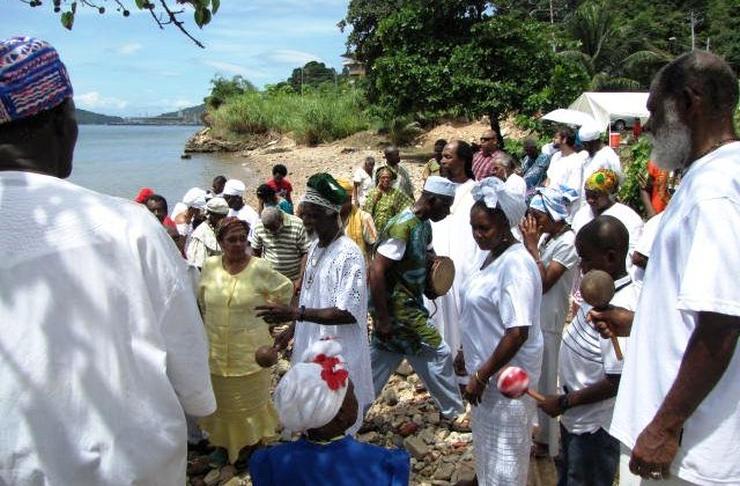 Unknown to most people, and often considered a mere folkloric tradition, the Shango ritual plays an important role in the lives of many inhabitants of the islands of Trinidad and Togabo.

The Shango is a religious ritual, which is still practiced today in the islands of Trinidad and Tobago. Many of the two Caribbean islands’ inhabitants are the descendants of African slaves, who were taken to the New World in the seventeenth century and were renamed Lukumi by white people after the words oluku mi, ‘my friend’, which they often used when they greeted each other. This expression also marked their group identity as ethnic Yoruba, who more than any other ethnicity, has remained faithful to the ancestral tradition of the people of the ancient kingdom of Dabomey, covering an area including the modern Benin, Togo and south-western Nigeria. These slaves brought a complex mixture of rites and beliefs into the New World.

This spiritual amalgamation combined the several religious elements belonging to the Yoruba, with Catholic, Hindu, Protestant and Jewish Kabalistic traditions. It became one of the most complex and flourishing forms of religious syncretism of the African-American tradition. This is shown also in the Shango of Trinidad, whose first nucleus derives from the Yoruba cult, beliefs and religious practices, which were combined with Catholic rituals initially and with many elements of Hindu tradition later. The white people’s refusal of the Lukumi’s ancestral traditions led the slaves of Trinidad and Tobago to disguise their traditional practices in the eyes of the Europeans. They, therefore, adopted Christian rituals and formulas, which however were in reality addressed to their African gods, in order to avoid persecution and prohibitions. With this clever system of homology, the Shango ritual is therefore a relevant example of faithfulness to the African tradition, through processes of authentic cultural fossilisation.

In the  expressive diversity of the Shango cult, possession is the only institutionalised element which is present and is performed in the same manner in the rituals throughout the two Caribbean islands. Achieving ‘trance’ is the essential element that constantly recurs in any Shango religious ceremony.

The achievement of a trance state is stimulated by musical rhythm. The deities or gods worshiped in Lukumí religion are called ‘Orishas’. The Orishas serve as mediators between humankind and the Supreme Being. These deities can represent all the virtuous qualities of the divine, yet the orishas are also human-like in their characters and mannerisms. They are celestial, yet they are worldly too. The African religious tradition of Trinidad, though mainly characterized by Yoruba elements, also includes multiple elements of other ethnic groups such as the Fon (Benin) or the Ewe (Togo) . The rituals often take place in the peristyles of Port of Spain, the capital of Trinidad and Tobago.

Rada cults, good spirits of African tradition which have been surveyed and originate respectively from a soothsayer of Ouidah and a priest from Dahomey, perform the same rituals, and worship the same deities which are hierarchically positioned in family groupings in the pantheon. These deities remind  one so much of  the voodoo gods of Abomey. Dada Segbo is the Creator God in the rada cults of Trinidad, the equivalent of Nana Buluku, and Ogun and Legba and many others belonging to the Sakpatan family, such as Sobo, the god of thunder, Agbe and Naete, the sea deities, are his descendants. The voodoo ceremonies and the sacrifices for the individual gods, are a repetition of the traditional rituals that can still be found even today in Benin, Togo and parts of southwestern Nigeria.

Nowadays, the inhabitants of Trinidad worship the major gods of the Yoruba pantheon. In the Orisha and Shango deity lists, gods can be identified and one can notice how their original names have been locally changed. So, ‘Ajajà o Mama Loatlè’, the mother of all nations, in the Shango of Trinidad, changes into Baba-byu-aye and Yemaja in the Lukumi pantheon. Olurum, known in Cuba under the name of Olafi or Obatala, splits into the male and female principles Batala and Lyamba.
The ecclesiastical system is also ran by a strongly hierarchical clergy according to the powers received during the initiation phase, the only means by which one can access to the Shango cults. According to the Yoruba model, the candidate, who wanders into the forest for a specified period of time, will receive power at the end. This is a sort of Christian grace symbolically sanctioned by a liturgical object, sacred to the gods, where each colour is linked according to the African rules to the nature and the will of the individual orishas.

All the local Shango clergy takes part in the Shango ritual of Trinidad, which is based on Protestant hymns and African dances around a central pole. All these elements are essential to the achievement of the hypnotic condition. This tradition evokes the most vivid aspects of a major revivalist religion on the island, that of the shouters. The tradition was prohibited in the early last century and has continued to be clandestinely performed until today, providing an even clearer picture of African-Protestant syncretism.

As for the places of worship, the temple includes Christian elements, such as the altar with the Bible, the cross, the candles, the pulpit of the preacher and African elements, with the central pole, the poteau-mitan, which had already been used in the voodoo cults of Haiti, and is also found in some candomblé rituals in Bahia, Brazil. Like the deities, the Shango clergy is also hierarchically organized, according to the powers received during the initiation, and is constituted by preachers, teachers, leaders, doctors, soothsayers, prophets, and nurses.

PreviousSenegal: A Shelter For The Talibés
NextChina: Where ‘Men Till and Women Weave’