Bolivia: The Visible and Invisible Shoeshiners 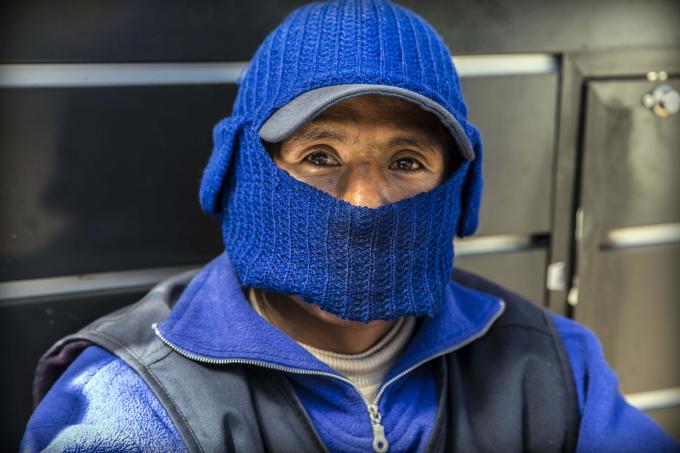 They cover their face behind balaclavas, greasy hands and heads bowed. Meeting the shoeshiners in La Paz.

Every morning at 5 o’clock, Paco leaves his home in El Alto, a very poor city on top of La Paz. He reaches the centre of the Bolivian capital after an hours travel by bus. He is one of the three thousand shoeshiners working in La Paz. He started to shine shoes when he was 10 years old and is now 20. “It’s not easy at all. It takes elbow grease to obtain ‘el brillo’ (shininess)”, he says.

His hands are rough because of the cold temperatures in La Paz, which is the highest capital in the world at over 3,650 meters above sea level. But Paco does not cover his face with the woolen balaclava just to protect himself from the cold or the smell of shoe polish, the reality is that shoeshiners hide their faces behind balaclavas in shame. They feel they are looked down upon, as many Bolivians consider shoe shining an unseemly activity. Shoeshiners are faceless, ageless and more often than not, nameless.

On the other side of the square, Robinson, another shoeshiner, is sitting on the steps of the Church of Saint Francis. “I started to polish shoes when I was nine years old. I cover my face because I am ashamed of the work I do, but this is one of the fastest and simplest ways to earn some money. I need to bring money home to help my family. Like Paco, I also live in El Alto and every day I arrive in town at six o’clock in the morning. I work there all day until late afternoon when I go to school to attend evening classes. My real dream is to become a mechanic”.

You can see through Robinson’s balaclava that he is chewing on coca leaves, a very common habit in Bolivia that helps to forget hunger and fatigue: “I have seven brothers and two little sisters. My father died when I was 10 years old. He taught me shoeshining. My mother sells fruit at the markets of El Alto and she finds it difficult feeding the family all by herself. That’s why I polish shoes so that I can support my family. But I hope that one day things will change.”

A small group of shoeshiners began to fight back, setting up their own newspaper in 2005, called the Hormigon Armado – a play on words that means both reinforced ‘concrete’ and ‘armed ant’, representing the resilience of Bolivia’s street people. “We are workers, people who struggle against poverty with dignity. We deserve respect, not contempt and discrimination”, says Louis, who has worked as a shoeshiner for more than eight years. The Hormigon Armado newspaper is published every two months and sold by around 60 shoeshiners. Seventy-five per cent of net income stays with the sellers and the other 25 per cent is saved for work development. The newspaper is fully managed by shoe-shiners, they are the writers, editors, designers and the distributors.

Oscar, a former shoeshiner and the founder and now editor of Hormigon Armado, explains: “Currently we work with sixty shoeshiners and their families and the newspaper is a window to their lives. We write articles about shoeshiners’ rights, and the rights of the children and teenagers who work on the streets. The goal is to promote their protection by society, giving them dignity and real development opportunities. We also promote respect for the environment, art and culture. We are very proud, we have received numerous awards and recognitions for our publication”. Several non-profit associations are supporting the Bolivian shoeshiners’ initiative whose goal is social redemption. Shoeshiners have also begun to organise themselves into small groups, each of which chooses an area of the town where they work. There are around fifty areas in La Paz.

The members collaborating on the magazine also launched another project, the “Hormigon Armado Tours of La Paz”, guided by trained shoeshiners. The tour is a way to see the beautiful city through the eyes of someone who is more familiar with the labyrinthine back alleys and small markets, than the usual tourist hotspots. The tour is an experience that allows a tourist to feel part of the reality of the area through a mixture of smells, colours and flavours, and by not remaining as just a spectator. The Hormigon Armado guides are 12 shoe shiners and ninety percent of the tour cost stays with the guides.

Thanks to their work as shoeshiners, many boys manage to pay for courses to further their education. “Many ex-shoeshiners have become successful engineers, architects and psychologists”, says Raul, who works for an NGO for street children, many of whom are shoeshiners. Few of them, however, reveal they are shoeshiners. “I’ll become a teacher in two years. Nobody in my class knows about my second life as a shoeshiner,” confesses Javier. Javier will continue to shine shoes secretly and to cover his face, so as not to be recognised by friends or acquaintances, while dreaming of a better future.