Kenya, Maasai: This Name Goes With You 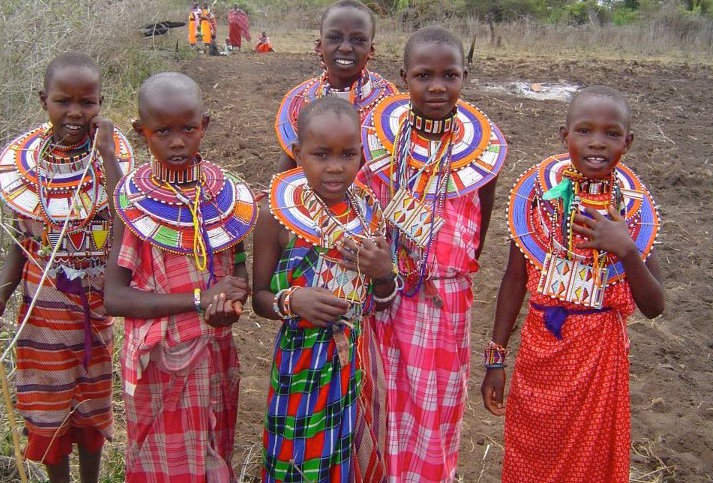 Maasai life is full of feasts, festivities and occasions to celebrate. Looking at a Maasai man or woman’s life-cycle provides a clear overview of the rich and full life that they celebrate. This becomes clear with the description of a particular ceremony – a child’s name-giving.

During the first four to six months of life, a Maaasi baby does not have an official name. Until the ceremony of receiving a proper name, it will have a nickname or the mother will call the baby one of the many terms of endearment that the Maasai use for their little ones – ‘enkutuk ai’, my mouth, ‘enkoshoke ai’ my womb, or ‘paranai”, born. Sometimes, the nickname survives after the official name-giving ceremony.

At the Enkidungoto e nkaina ceremony, the decision of a proper name and the ‘Embamoto e nkerai, both the child and the mother get their hair shaved. For the celebration, honey-beer is brewed in a bag or in a large gourd and plenty of food is cooked and served up. The atmosphere is noticeably festive in the enkang, the homestead.

Late in the afternoon, men, women and children all head towards a tree outside the settlement to pray to God. The mother of the child, who is to be shaved, stands in the middle of the gathering. People pray to God for both of them. When their prayers end, they all go back into the enkang.

A little later, a woman with the role of shaving the hair of both the mother and child arrives and everything is then ready for the ceremony to begin. A healthy cow’s hide is laid out and an elder’s stool is placed near it. Milk mixed with water is then provided in the top of a gourd, together with a new razor blade.

The stool is then placed in the middle of the area on top of the skin and the young mother, who is holding her child, sits down on the skin near the stool together with the woman who will carry out the shaving. Milk is poured onto the concave seat of the stool and blended with enkare pus, the milk and water mix, from the lid of the calabash.

The left over enkare pus is poured over the mother’s head and her hair is shaved – starting from the right side of her head, with the shaved hair not being allowed to fall onto the cow hide. The shaver catches it and places it on the stool in a ring around the small pool of enkare pus. An opening is left in the hair circle and a small stick, such as the oltim-bush at all village gates is symbolically placed in the opening of the hair. The child’s head is then shaved with the enkare pus which is on the stool, and the hair is placed in a circle on top of its mother’s hair. When the child’s head is shaved, the stool covered with hair is lifted very gently, whilst the child’s mother picks up the hide to place it, folded, on her bed.

The child’s mother then sits in the middle of the bed and the woman who carried out the shaving brings the stool, with the hair, making sure that the enkare pus is not spilt. In her left hand, she carries leaves of fresh lipia bush and the child’s mother unfolds the hide. The leaves are put on top of dried branches, then she pours the hair onto the leaves, covering them with the remaining wet leaves. The hide is brought back to the bed and stretched out as usual.

The woman who did the shaving picks up a stick to clean the calabash and dips it into the gourd with the residual fresh milk. She lets the milk drip onto her hands twice, while the mother holds fat or butter on a spoon. She then hands these to the woman who shaved the head, who mixes the milk and the fat and smears it on the mother, beginning with the shoulders from right to left. She then moves to her waist applying the milk and fat. When anointing the shoulders she says, “I give you the beaded necklace of both boys and girls”, and arriving at her waist she says “I give you the waist belt of offspring”. When this is done, she puts the stool away so that no one will use it until the child’s father sits on it to give the child a name. The woman who carried out the shaving is given food and will go her own way while the young mother stays inside the house.

Meanwhile, two men and two women have been chosen will together debate a name for the child until they all agree. The elder, who was chosen first, repeats the new child’s name to the father four times and the father responds by saying ‘oee’ in blessing. The same elder repeats the announcement to the mother in blessing a then the second elder does the same. This is repeated with the chosen women.
In the next stage, the two elders bless the name of the child while seated, saying “May this name settle with you. May it go with you in honour. May it be called out by you. May this name follow other children”. This ends the ceremony in the early evening and then the elders receive honey-beer.

The next day at dawn, the mother awakes and makes a bull get up to catch its first dung before it drops to the ground. She uses it to anoint the child’s head before milking the cow. When she returns to the house she first removes the stool, anoints it with fat, and then gives it to her husband so that he may sit on it. This concludes the entire ceremony. The woman will not wash herself in the open or in the river until her head is shaved once again with enkare pus. She will then be free to wash however she wishes.