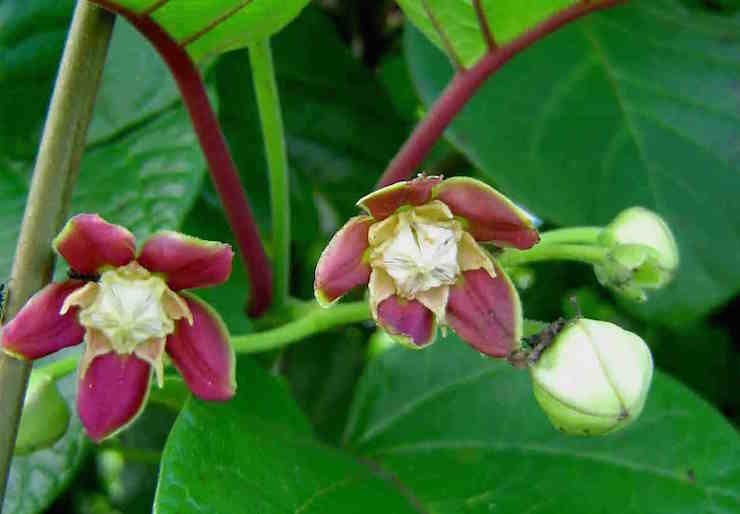 It is a climbing plant referred to as ‘African white ginger’ because of its spicy properties and resemblance to ginger.

The plant is endemic in South, Central, East and West Africa, Senegal in the West, Southern Sudan in the East and throughout most of Central Africa and Southern African countries. Mondia whitei has a large root and the leaves are normally around 3-6 cm long. The flowers that blossom have florescent yellow, red and purple petals with fruits

Mondia whitei has seeds which are collected as the fruit starts to open up. The seeds can be sown fresh, but they can also be stored for about a year, under normal room conditions. This plant has extensive historical use in African traditional medicine to treat many health conditions and as a spice in food and teas.

The most important part of the plant used in traditional medicine is the root, which can be used either fresh or dried, though the fresh roots are most commonly preferred. The fresh or dry roots can be pounded, steeped in water overnight, filtered or decanted after the solids have settled and used for medicinal purposes such as stimulating appetite and treating post-partum bleeding, pediatric asthma, body pain, jaundice, anemia, asthma, allergies, headaches, gastrointestinal disorders like stomach ache and indigestion. In some instances, Mondia whitei has also been used in the treatment of tension, stress and depression.

Fits in children and stress and tension in adults are also treated with concoctions from the root of Mondia whitei by African traditional healers. Indeed, many herbalists in Africa say that this plant can provide strength, energy, stamina, endurance and is able to improve mental wellbeing. Some herbalists recommend taking the Mondia whitei concoction to improve sleep, as well as easing birth pains.

The dried or fresh roots can also be cooked in meat or chicken stews as a spice to enhance the stew flavor and to improve preservation. Across African countries, Mondia whitei is most popular for its aphrodisiac function of enhancing fertility.

Sometimes men can be seen chewing the fresh or dried roots as an aphrodisiac. In fact men who are impotent or infertile are given Mondia whitei as a remedy. Mondia whitei is also reported to be used by some traditional healers to treat chronic diseases like diabetes, hypertension and cardiovascular diseases that are beginning to emerge in African countries.

In many parts of Africa, Mondia whitei is regarded as high value medicinal plants by both men and women. Fresh and dried Mondia whitei roots are always sold in open markets across Africa in urban and rural areas. Sometimes the dry roots are milled and packed by small and medium scale enterprise companies as herbal teas and spices to flavor food and soft drinks. Mondia whitei tea is also used to treat general body pains and aches. Apart from the roots, the dried leaves of Mondia whitei are also powdered and mixed with food and taken daily as a supplement to prevent a number of health conditions.

Scientific studies have found that Mondia whitei is rich in bio-active medicinal compounds like sterols, tritapenes, alkaloids, saponins, tarnins, flavanoids, alkaloids, glycosides, phenols and terpenoids. The sweet, sugary and spicy taste was found to be associated with vanilla compounds and sugars present in the plant. Other scientific studies have also found that Mondia whitei has anti-depressant properties.

In conclusion, Mondia Whitei is an important medicinal plant to Africa and has a potential to contribute to Africa’s development.