Priestly Ordination of Comboni Missionaries Around the World 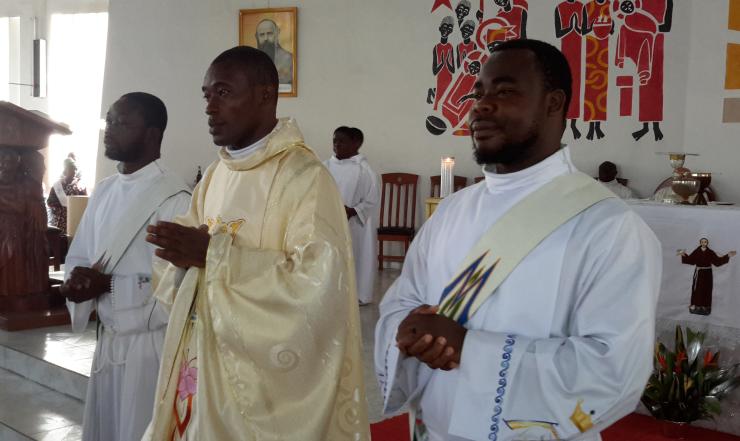 From Kenya to the Philippines to Benin, four young people have recently been ordained in the Comboni Missionaries Family.

Fr. Benjamin Avoga was ordained on 9th October. Typical African singing and dancing marked Fr. Benjamin’s ordination. A mammoth crowd joined together at St Joseph’s Parish in Nyamira County to witness the colourful event. Nyamira County is located in the Western part of Kenya about 305km from Nairobi, the capital.

In his homily, Bishop Joseph Mairura of Kisii diocese reminded the assembly that God is the master of history and cares about each and everyone. He also gave a vote of thanks to the people that have helped Fr. Benjamin in his vocation journey. Fr. Benjamin is the first priest from his parish.

On 29 October, 2016, after 34 years of missionary work among the Pastoralist Pokot in Kenya, the Comboni Missionaries were able to rejoice at the ordination of the first Comboni Pokot priest. Approximately three thousand people converged on the grounds of Amakuriat mission to witness this historical event.

The Comboni Missionaries first officially came to Kenya in 1973 from the Amudat mission in Uganda. Brother Dario Laurencig was the first Comboni missionary in 1982 to set foot on the soil of Amakuriat mission, the home parish of the newly ordained priest, Abraham Ang’Irotum Sireu, who was then only a few months old. Thirty-four years later, dressed as a Pokot warrior, deacon Abraham was presented by his father for ordination. Bishop Morris Crowly, Kitale diocese, presided over the Eucharist. Pokot songs and dancing punctuated the awesome ordination celebration.

The same spirit of joy also continued into the next day at Fr. Abraham’s thanksgiving mass. Fr. Barry of Kitale diocese in his homily underscored the miracle and gift of Fr. Abraham’s ordination. He urged the Pokot faithful to support their sons and daughters when answering to their call of vocation, by beginning to send them to school.

A group of Pokot nuns from different institutes and a vocational team added variety to the thanksgiving celebration. They discussed and shared their experiences as vocation promoters. Their appeal was unanimous – it’s time for the Pokot youth to consider religious life and take the priesthood seriously.

On the 5th of November 2016 in the Philippines, the Comboni Missionaries celebrated a great occasion of joy and gratitude to God: Margarito (“Mar”) Santiago Garrido was ordained priest by Bishop Arturo M. Bastes, of the Diocese of Sorsogon. Mar joined the Comboni Missionaries after having obtained a Bachelor Science Degree in Agricultural Engineering and a Master’s in Management and after having been employed by the Local Government Unit of Matnogon, in research for two years. He had his novitiate in Mexico and studied Theology in Peru.

Bishop Arturo spoke about St. Daniel Comboni with enthusiasm and asked Mar to imitate his great missionary zeal and to keep his eyes fixed upon Christ. Finally the Bishop encouraged the Comboni Missionaries to continue making their presence in the Philippines and Asia more and more visible. A few days later on Saturday the 12th November at the Comboni parish of St. Francis of Assisi in the Fidjrosse quarter of Cotonou (Benin), Armel Atohoun Comlan Aflihoun, a Beninese was ordained to the priesthood.

The celebration was presided by the new Archbishop of Cotonou, Msgr. Roger Houngbedji. The Archbishop invited the newly-ordained priest to live his priesthood in humility and gratuity, at the service of all, always willing to listen to others and to accompany all to their encounter with Christ. On Sunday the 13th, Fr. Armel celebrated his first Mass at Fidjrosse, his native parish, where he grew up and where his Comboni vocation was born.