The Routes of Migrants 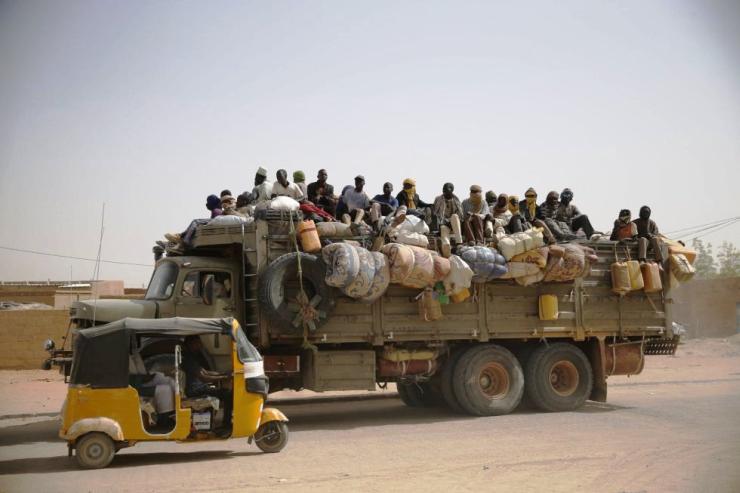 Across the desert. In the grip of traffickers and military people. A long journey that can last as long as twenty months. The hecatomb in the Mediterranean Sea.

“Our driver tried to go through different paths across the desert to avoid the check points, but he got lost. He stopped the vehicle and left it, leaving us, 34 of us, alone in the middle of the desert without food or water. Some people tried to make their way through the desert on foot, but they never returned, they must have died. Most of us remained near the vehicle for three days. Eight died because of dehydration and lack of food. My mind got confused, I could barely see clearly anymore and I started to have hallucinations. After three days, a vehicle came to pick us up. Only four of us had survived. I still have nightmares and I see the dead bodies of my friends lying in the desert. My body is among them”, Habib speaks softly. He left his small village in the northern part of Senegal three months ago with many dreams, which have since been broken.

Several migration routes are used to reach the shores of the Mediterranean from Africa. One of them is the West African route, heading towards Italy. It passes through Niger and Libya and then crosses the Strait of Sicily. The average duration of the travel from the country of origin is twenty months. The average time spent in Libya is fourteen months.

Many Africans leave their countries of origin by taking public buses. Public transport itself is not expensive. The migrants from Senegal, Gambia, Guinea and Ivory Coast usually head to Bamako, in Mali, and they then move from there to Ouagadougou, in Burkina Faso, and eventually reach Niger. An alternative route is the one that passes through Bamako and Gao, in Mali, heading to Niamey in Niger. The Nigerians, however, reach Niger through Kano. The migrants from Cameroon cross Chad to reach Madama in Niger, heading to Libya.

The toughest part of the West African route is the Saharan ‘road to hell’ between Agadez in Niger and central Libya. This stretch of road passes through Agadez, Dirkou, Madama, Al-Qatron and Sabah, across the Ténéré desert. Along this journey, migrants are not only victims of smugglers, charging thousands of dollars for passage, but also of extreme heat, thirst and reckless driving that kill many before they even reach the Mediterranean shores.

The journey lasts from three to six days, the migrants are packed inside pick-ups, which generally transport twenty to thirty people. The transport is managed by smugglers, who ask from 50 up to 200 euros for the Agadez-Lybia travel. Tayyib from Mali explains, “The network of traffickers is well-organized. The several segments of the route are often managed by different traffickers and the transport is served by different drivers, so in many cases migrants are forced to stop along the way to wait for the next driver, and sometimes another vehicle, to continue. Because of this, the journey can take several days longer than expected”. Most of the time, several lined-up vehicles travel together, and this way of travelling is called ‘comba’ by migrants.

The main route from the Horn of Africa, mostly used by Eritrean migrants, passes through Sudan and Libya. The average duration of the trip from the country of origin is 15 months. The average time spent in Libya is three months and Ethiopia and Sudan are the countries where Eritrean migrants remain longer. According to reliable estimates, about 4000-5000 Eritreans leave the country every month to escape to the European shores.

“The Eritrea-Sudan border is an incredibly dangerous place due to the presence of military personnel in charge of implementing the ‘shoot-and-kill’ policy against all Eritreans who attempt to leave the country” says Mebrahtu, an 18 year-old Eritrean. Several Eritrean migrants have confirmed that they were kidnapped or had witnessed the abduction of other people for ransom, especially by the Rashaida tribe members colluding with the military.

After crossing the border, most migrants reach Kassala or the Shagrab refugee camp in Sudan or the camp of Mai Aini in Ethiopia. Once they reach Khartoum, migrants cross the desert heading to Libya, packed inside pickups, with scarce food and water, which are often not enough for their subsistence.

An alternative and shorter route across the desert starts from the city of Dongola, north Khartoum. Migrants reach the border with Libya on board of a pickup, which later returns to Khartoum. Migrants get on another pickup which is managed by Libyan traffickers.

The cost of the passage from Sudan to Libya ranges from 1,000 to 1,500 dollars. From northern Libya migrants try to reach the coast of Benghazi or Zuwara and Sabratha, west of Tripoli and close to Sicily and then they board a boat heading to Italy. Then, there are the routes passing through Algeria and from the Horn of Africa through Sudan and Chad. There is also an alternative route to the Libyan one, which is used by migrants from the Horn of Africa and crosses Egypt from where migrants travel for about eight to ten days by sea, heading to Italy.

African migrants, besides deprivation of food, water and poor sanitation, face kidnapping, robbery, and other humiliating and inhumane treatments on the smuggling routes to Europe, particularly in places of detention such as Libya. Migrants are also victims of foot beating – falaka, burns and other tortures. “Smugglers do not consider migrants as human beings”, says Abiaz, a young Cameroonian woman. Aldarr, a Senegalese from the capital Dakar says “If I had known that the desert was so hot and full of dead bodies, I would have never crossed it. That was not a desert, but a graveyard. I’ve seen several people dying in the desert. I thought I would die there when the vehicle we were all packed in to had a fault and we were left without food or water for two days”.

Once they reach the coast, migrants have to wait a long time, sometimes months, before they board boats heading to Italy. The crossing of the Mediterranean Sea ends up in tragedy for many migrants. International Organization for Migration (IOM) reported that since the beginning of the year, 4,027 migrants or refugees have perished while trying to reach Europe by sea, of whom three-quarters, 3,034, died in the Mediterranean. The ninety percent of the dead were in the stretch of the Mediterranean between Libya and Italy, and in almost all cases, the victims were from sub-Saharan Africa. IOM has also estimated that 249,854 migrants and refugees came to Europe by sea from the beginning of 2016 until September, most of whom were headed to Italy and Greece.

PreviousSouth Sudan: “We Are Tired Of The War”
NextPeru and Bolivia: Life Around Lake Titicaca