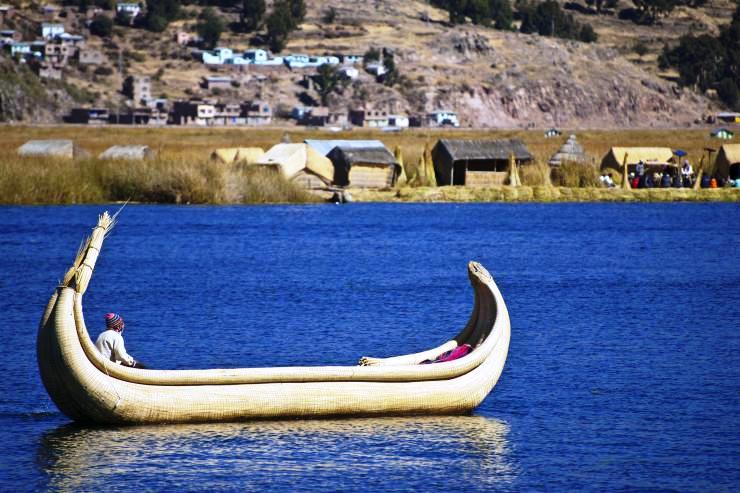 Few borders in the world show as much cultural similarity on both sides as the one between Peru and Bolivia. In the Andean highlands, Lake Titicaca joins these two countries whose cultures have evolved together for most of history. There is no change of culture or scenery when you cross to the other side.

Lake Titicaca is a unique place on the American continent. It is the lake with the largest volume of water in South America. It is also known for its altitude, 4,409 metres above sea level, and for the way in which its extraordinary environment has forged the character of the area’s inhabitants. Its geological origins go back to the Pleistocene period when an ancient inland sea called Lake Ballivián covered a large part of the highland plateau. Then, as a result of various geological processes and evaporation, its depth was lost and became two lakes, Titicaca and Minchin. The latter, in turn, morphed into what is today known as Lake Poopó and the salt flats of Coipasa and Uyuni.

The scientific origin of the area has its mythical counterpart in the creation story of the ancestral people who have lived there since the beginning of time. The pre-Inca Tiahuanaco civiliation believed that the Sun and Viracocha both emerged from the mysterious depths of the lake and that Viracocha created heaven and earth. The Inca believed that this was the birthplace of their civilization. This was the place where Manco Cápac, one of the last Tiahuanacos and the founder of the Inca Empire, was born in the midst of an exodus, during a time when his people were fleeing Aymara invasions. According to legend, the Sun and the Moon were both born from the waters of the lake.

The Inca civilization lasted for centuries until the arrival of the Spanish conquistadors. Then, the empire was destroyed, but the spirit of the civilization continues to live on, in part through the area’s inhabitants who practice the Inca moral code even today. In Quechua this is summed up as “Ama suwa, ama llulla, ama qilla – thou shall not steal; thou shall not lie; thou shall not be lazy”. Currently, Lake Titicaca is fed primarily by the merging and melting of the gigantic glaciers of the Royal Andean Range. Since the lake is almost completely sealed off, it loses about 90 percent of its water through evaporation. The Desaguadero River, which drains into Lake Poopó, accounts for the remaining 10 percent. The depth of Lake Titicaca varies at different points, but averages around 110 metres deep. It is actually two lakes, or sub-basins, connected by the Tiquina Strait.

The Peruvian and Bolivian sides are very similar, though the people who live on each side like to tease each other about differences. One of the best known distinctive features of both sides is the classic dress of the cholitas. But the origin of the cholita dress isn’t indigenous, it was imposed by King Carlos III after the uprising of José Gabriel Túpac Amaru in 1781. In fact, it is the eighteenth century traditional Spanish attire. The braids were imposed by the Viceroy of Toledo to tell the Indians apart from the mestiza and Spanish women. The bowler hat was adopted later, in the early twentieth century when, due to a shipping error, a large number of men’s hats were sent to La Paz. The salesman, desperate to avoid losses, talked young women into buying them by promising that the hat would bring fertility.

The population is spread out in clusters along the sides of the lake, and in the handful of islands that along the lake’s surface. On the eastern shore, on Bolivia’s side, is the city of Copacabana. Though small in size, it is the primary urban hub on the Bolivian side of the lake and a historic centre for religious pilgrimage.

Located between two hills called Calvario and Niño Calvario, it is also the capital of Manco Càpac Province in the Department of La Paz and it is the primary port from which boats set sail to the sacred island of the Inca, Isla del Sol. With the only beach in Bolivia, the area has been turned into a recreation site for a few families of La Paz.

From the lakeshore, we can see the water disappear over the distant horizon and it looks more like an ocean than a lake. In fact, it is the only ocean Bolivians have since losing their Pacific access to the Chileans after the 1879-1884 War of the Pacific. Since then, Bolivia’s ocean has been Lake Titicaca, and the Bolivian Navy has conducted its operations on the waters of the lake. The most traditional Bolivia, in terms of its way of life, is found between Copacabana and the Strait of Yampupata.

As we cross the Strait of Yampupata headed towards the Isla del Sol, we can see in the distance, behind the Isla de la Luna, the imposing peaks of Illampú and Ancohuma, 6,362 metres and 6,429 metres above sea level respectively. These are the highest peaks of the Royal Range, with snow all year round and glaciers that feed into the lake.

Isla del Sol, the Island of the Sun, used to be called Isla Titi’kaka, so it is quite possible that the name of the lake originated here. According to some linguists, Titi’kaka could be a corruption of the words Titi, puma, and Kala, rock, meaning ‘the Rock of the Puma’. The current name of the island probably comes from the fact that it was a sanctuary dedicated to the Sun god, Inti, during the Inca Empire.

One of the best preserved sites on the island is the labyrinth-like Chincana archaeological site, and the most frequent entryway to the island is the staircase that passes by the Fountain of the Inc, from which abundant fresh water springs, to the edge of the Yumani village. The main economic activities here include raising sheep, fishing, terrace farming and, during the last few years, tourism.