Peru: The Voice of the Kukama People 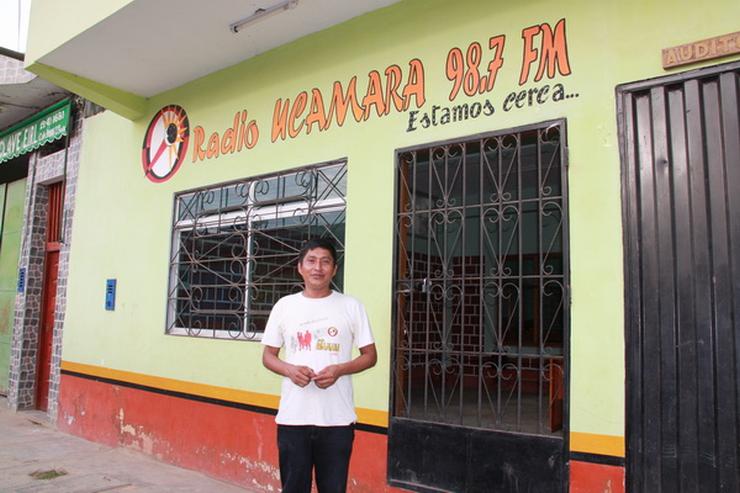 Ucamara is a radio broadcaster based in Nauta, a town in the Peruvian Amazon. Above all, this radio is the Kukama people’s voice, an indigenous group fighting against the abuses of oil companies.

After a two hour journey travelling from Iquitos, the capital of the Peruvian Amazon, we reach the town of Nauta, located at the junction of the Marañon and Ucayali rivers that form the Amazon River. The city is the gateway to the Pacaya-Samiria National Reserve. We stop at the gate of Radio Ucamara, one of the few voices in support of the indigenous peoples against the overwhelming power of oil companies and more recently, the tourism industry. We meet Leonardo Tello Imaina, the Director of this Peruvian radio, and he tells us how Ucamara was born. “At first, Ucamara radio was called ‘La voz de la selva-Nauta’. It took its name from the first “La voz de la selva” radio station in Iquitos, which was created in February 1992 during the civil war, by the  Institute of Social Promotion Amazon, a foundation established by the Apostolic Vicariate of Iquitos. Then in 2006, “La voz de la selva-Nauta” changed its name into ‘Radio Ucamara’, a name derived from the syneresis of  the Ucayali and Marañon rivers.

Leonardo Tello has worked as Director of Radio Ucamara since 2010, he had earlier taught Social Sciences at a college in Nauta. “I have Kukama origins from my father’s side, I am Achuar on my mother’s side and I have some Quechua blood too”, he tells us. “I was enthusiastic about collaborating with the radio from the very beginning, because I soon realised it could be a way to do something useful for others, especially for my people”. The Kukama people are linked to a long history of suffering and injustice, starting from the 1885-1915 genocid, when male rubber tappers and porters were mercilessly exploited and driven to death, with the devastating invasion of indigenous lands by multinational companies.

For a long time, Ucamara Radio has been committed to the recovery of the individual and collective memory of the Kukama people and their language. “I do not speak this language”, Leonardo Tello explains to us.“We did not use it at school. Nowadays, only people aged over 75 can speak the Kukama language. If we do not do something now, this language will likely disappear in ten years”. Radio Ucamara tries to revitalize the original language and culture in Perù through the use of communications. “The radio is currently transmitting two programmes in the Kukama language”.

International oil companies are destroying the rainforest and waterways that feed the Amazon River, contaminating the water and land, threatening the lives and cultures of the indigenous peoples. The dumping of oil waste into the waters of the Marañón and the Amazon forest is producing fatal consequences for the Kukama ethnic group. For over 40 years, they have protested against pollution, violence and corruption, but the oil business has always had the upper hand.

Leonardo Tello adds, “For Peru’s Kukama people, the rivers and lakes are central to their culture. They not only provide the Kukama people with food and water, but they also relate to their religion, with the spirits that live under the water. If a person disappears in the river, relatives believe they have gone to live under the water and that the person visits in dreams or through shamans. Pollution therefore not only affects water but also Kukama’s spiritual beliefs”.

Ucarama radio Director stabs at the Pluspetrol oil company, “The company is responsible not only for the environmental contamination, but also for the negative impacts on the indigenous people’s life and culture. Oil company managers claim they bring jobs and wealth to the indigenous people, when in reality they bring their own workers instead of hiring locals”. He comments on the increasing tourist volume that Iquitos and the Peruvian Amazon have experienced over recent years. “Most of the tourism agencies are operating in an irresponsible way. They do not take into consideration the impact that tourism may have on the indigenous population and its culture. Some small local canoes were run down by tour boats that were cruisingon our rivers. A responsible tourism agency should respect indigenous communities, their life and their culture. The Peruvian Amazon has so much to show, but tourism, as currently being practiced, is destructive and offering just a limited  view of this region. The government keeps on turning a blind eye on these matters. An example of this is the Pacaya-Samiria Reserve, where the Kukama people are not allowed to fish because it is now a tourist area, but at the same time, the place has been persistently abused by Pluspetrol”. Leonardo Tello continues, “Another example is the port of Nauta. Authorities have sold the port to oil companies, tourist boats and fuel station enterprises. A few years ago, one could watch the coming and going of the local fishermen, hunters, and farmers’ canoes in the harbour. They are no longer there, local people had to find alternative occupations, sometimes non-environmentally friendly, in order to survive.”

Leonardo Tello continues, “By denouncing through Ucamara radio, people may make some enemies. This is what happened to the Vicar of Nauta, not too long ago. The owner of the tourist enterprise ‘Jungle Expedition’ threatened the Vicar, claiming that Radio Ukamara had better not interfere with his business, otherwise there would be trouble. He also threatened to destroy the premises of the radio. The staff at the station had already been threatened on several occasions. But we keep on speaking out against corruption and abuses, because we are convinced that people have the right to know what is going on”.

The Ucamara radio station staff consist of four people, plus a variable number of volunteers. “Our programmes also includes a newsletter, entirely managed by women, because feminine perspective gives added value”, says the radio Director. The broadcaster now reaches 45,000 people, a relevant audience in the region. If you look out the windows of the Ucamara news room you can see the stunning Amazon River. “The commitment of our radio is adopting perspectives and ways of thinking  of the indigenous population to meet the challenges of today. We have much to learn from the Kukama culture.”

PreviousComboni Missionaries to the Youth
NextBenin: The Gelede Masks – A Treasure of Tradition