Benin: The Gelede Masks – A Treasure of Tradition 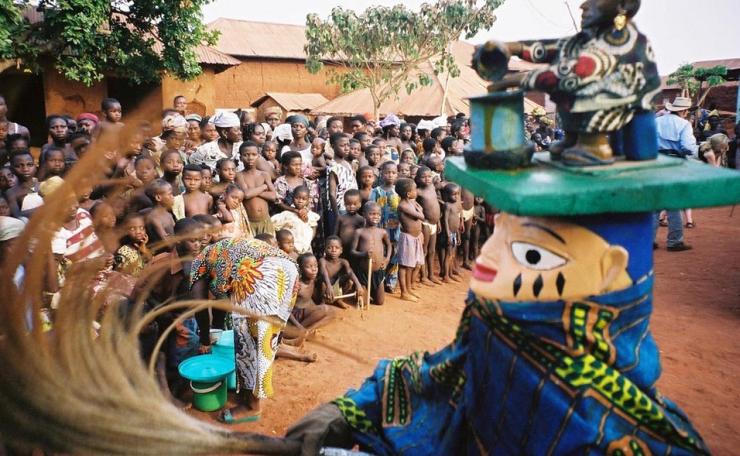 Masks, magical movements, singing: the wisdom of the village is passed down from generation to generation, year after year.

It is a warm morning and all the inhabitants of Lanta Kope, a small village in southern Benin, have gathered to attend the Gelede festival which takes place when the dry season ends and when the rain starts to arrive. The name ‘Gelede’, or female power, derives from the name of a secret society of Yoruba origin, the largest ethnic group in West Africa scattered between southern Nigeria and southern Benin. People attending the mask ceremony pay tribute to Yami, the main deity of the village and the source of every good thing.

The Gelede masks are used to ward off evil spirits which manifest themselves through calamities, or to solve ethnic conflicts, to moralise behaviours and to reassert important events among the community. The Gelede masks are also a way to send messages of compassion, solidarity, or insult and joke.

The man and the woman who distinguish themselves by their wisdom and loyalty to the group, are the custodians of the mask. The choice of the couple is not accidental. The Gelede masks are in fact female masks worn by men, implying that the ceremony and its meaning involves both the men and women of the community.

The men who wear the masks are dressed in traditional colourful clothes. The Gelede ‘mask’ can be more accurately described as a headdress, since it rests on top of the head and is made up of exuberant colours. The Gelede headdress is generally carved in two parts, the lower part often with the form of a human face with big, open eyes, and the upper part with either an elaborate coiffure or the depiction of human activity through symbolic motifs. The face of the mask has female lips, which show vertical scarification lines at the corners of the mouth, which are a typical tribal mark among the Yoruba people. The pupils and nostrils are roughly pierced with circular holes. The chin of the masks protrudes beyond the ordinary, which experts call ‘prognathism’, adding extra expression to the mask. In view of the spiritual power attributed to women among the Yoruba people, the Gelede masked performance is a way of sustaining life through creating a social bond with their female elders and paying respect to them. There will be peace in the community and the land will be blessed by rain and fertile soil. At the same time, the Gelede festival turns out to be a real show, entertainment, and fun for all in the village involved.

The festival never fails to meet the expectations of the people of the village. During the celebration, the choir members stand in a circle moving counter-clockwise and mark the rhythm of the songs with alternate movements of legs and shoulders. There are two large drums at the center of the circle. The Gelede masked performance involves carefully choreographed dance, with pairs of men wearing similar headdresses. During the performance, each pair of dancers comes forward in turn and moves in intricate dance steps towards the drum rhythm. Drumming and singing are essential features of the performance. A series of Gelede headdresses illustrate different characters or animals, among them the Yami mask whose arrival is accompanied by the sound of bells. The mask kneels and prays to the Creator, in the name of all the people of the village, imploring clemency for all. The choir sings songs that represent and express the needs of the community such as, for example, a school for the children of the village. Two dancers disguised as pregnant women, a symbol of the many children in the village and the many more to come, join the Yami mask and pray with him. Another mask reaches the others and represents a truck, as a copy of the many trucks that pass through the village. The message of the choir’s song is clear, it refers to the people of the village, who do not own trucks or cars for transporting cement, sand and other materials needed to build the school, but who nevertheless will do their best to get it done. The audience listens, smiles, and claps, confirming they have received the message. The Gelede ceremony invokes and ensures the spiritual forces’ benevolence towards the people of the village. It will be up to them, then, to do their best in order to provide their children with a school.

The last mask that joins the others represents a hyena, which reaches the other masks, running on long stilts. The mask runs, jumps, falls to the ground pretending to be dead, then gets up again. The scene recalls the days when the village was threatened by wild animals. There is less danger nowadays, but it still happens that some animals assail men or cattle. The hyena symbolizes the antagonism that characterizes the relations between the village and the surrounding nature. People mock the hyena and dozens of children then run after the mask while singing songs. The ceremony ends and people begin to leave. The Gelede festival does not disappoint the community’s expectations. This ceremony combines art and ritualistic dance to entertain and educate people, and is held on several occasions for different purposes.

The Gelede festival confirms once again the cheerful nature of the Yoruba people. Echoing modern realities and modern needs, such as education, the ceremony is also a treasure of tradition.