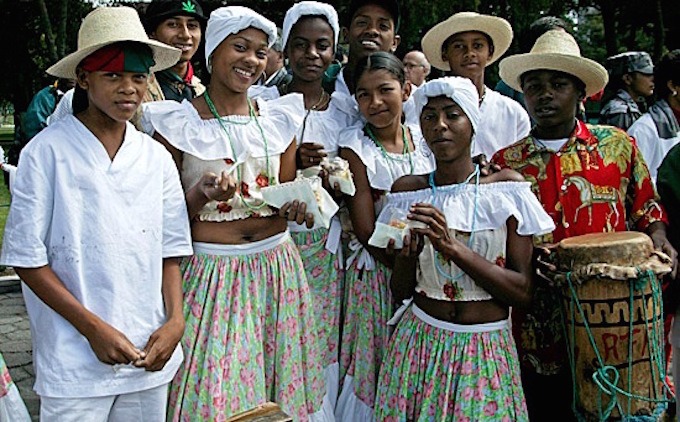 Guimbí is a small village in a forest in the north of Esmeraldas province, Ecuador.

The villagers are the descendants of African slaves, who worked in the mines and settled there in the late 1700’s. They have preserved several ancient African traditions, especially religious ones. They make their living working in the fields, fishing, hunting, and selling wood.

Usually their songs are imbued with hints of melancholy, instead, the music and songs for the Christmas “fiesta” are particularly merry and joyful. All members of the community are actively involved in Christmas rites.

For nine consecutive evenings before Christmas day, the people of the village gather to recite the Rosary led by the sindico, the person in charge of everything sacred, by the maestro de capilla, the choirmaster and by the catequista, the catechist. When they finish praying, they start singing traditional songs, arrullos, with a cantor singing the motif and the choir then repeating it.

The chorus is accompanied by the sound of instruments such as maracas, or the “guasà”, an instrument made from a bamboo tube filled with seeds or pebbles, the “bumblebee”, a drum, the “cununos”, small drums, and the marimba, a local xylophone. In the meantime, a group of women lay a small Baby Jesus statue on an embroidered sheet, and carry it in procession through the village streets, while people continue singing arrullos and reciting the Rosary. Many have lit candles in their hands. They then go back into the church, where they gather in the centre, circling around the group carrying the sheet with the statue of the Child. The dance speeds up and everybody continues singing arrullos or villanecicos. The ceremony ends with a prayer.

Christmas celebrations require organizers and collaborators. The capitana, a female captain, organises alms collection and buys everything that is needed for the celebration. The fiesteros are those who want to participate more actively. They offer a fixed fee to the capitana and collaborate for everything to work smoothly.

On Christmas Eve, early in the morning, a group of men go to the forest to collect palm branches and “balsa” poles. Balsa is a soft and very light-weight wood used for floats. The men then drag three canoes to the river bank, and tie them one to another with poles and vines.

Finally, the balsa logs are placed on the sides of the canoes to ensure stability and buoyancy. Other balsa logs are tied together to form a floating platform upon which a small altar is set up. Everything is adorned with palm branches, coloured flags, and other ornaments.

At around seven in the evening, the cantoras, bomberos, and fiesteros with other volunteers get on board and lay the image of the Virgin Mary onto the small altar. She is dressed in a blue mantle with a golden hem, and a silver crown on her head. Afterwards, everybody boards the raft and a group of young people starts rowing slowly.

People in the canoes sing the Christmas arrullo holding lit candles or small tin cans with an unshielded wick burning kerosene, the macheros. The songs and the candles offer a spectacular show of sounds and lights to the people watching from the riverbanks.

When the raft reaches shore, a group of people carries the Virgin’s image in procession through the streets of the stone village, barely illuminated by the faint light produced by a generator, which is turned on only for special occasions. When people reach the church, they put the image of the Virgin near the Nativity scene, which has been set to the left of the main altar. Then they recite the Rosary and sing litanies, Vespers, and the Magnificat, all in Latin. People attend the ceremony with genuine and active participation. When it is over, the image of the Virgin is carried again in procession to the sindico’s house. It is put on a colourful decorated altar set up in the house’s largest room. People gather around the altar and start singing the Christmas arrullos and villancicos with great faith and hope for the future, overwhelmed by the emotions of this Holy Night, “Baby Jesus is arriving, Light has come”, they sing.

Some also recite poems or lyrics, invented or learnt from the elders. At one in the morning, they go back to the church where they stage Jesus’ birth.

The sindico, with the maestro de capilla, and the catequista play the roles of those who assist Mary in giving birth to her Son. They put the image of pregnant Mary in the Nativity scene and hide everything with a coloured sheet. They even hide themselves behind a curtain. After a few minutes, the great silence is broken by a cry of pain. The sindico announces the great news to the community with a powerful voice: “The Child Jesus is born!” Soon another man repeats: “Baby Jesus is born!” Others continue to repeat the same announcement.

The curtain and the sheets are removed and everybody can see the image of the Virgin and child in the crèche bathed in light. They all kneel to adore the child, and start singing solemnly.

All of a sudden, a joyful song comes from the far end of the church, some women dressed as shepherds sing: “Come see the Baby Jesus”. While dancing, they approach the nativity scene and offer clothes and other gifts to Baby Jesus. The sindico and the women lay the image of the Virgin and child on a large embroidered cloth covered with flower petals. Meanwhile, the capitana, the fiesteros, and everyone else walk to the centre of the church and form two parallel lines facing each other. Two by two they hold the opposite sides of the sheet with the image of the baby and rock it for few seconds, before passing it on to the next two beside them.

In the end, the sindico takes the statue of the child in his arms and sits down on the steps of the chancel. The adoration rite starts, two by two, people genuflect three times before the image of the child and kiss it. Then everybody starts to sing, a strong and harmonic chorus. It is almost as if this vibrant sound could tear off the church roof. They express their joy of living so well with their singing!

At the end of the adoration, according to tradition, there is the robo del Niño Dios, the kidnapping of baby Jesus. A group of people “kidnap” the image of the child Jesus to show it to the entire village, going through all the streets, giving those who, for one reason or another, were not able to attend the ceremony, the chance to see and worship the image.

A few hours later, the image of the Niño Dios is taken back to the church, accompanied by joyful songs. People sing until six in the morning, when the sindico concludes the rite of the Child Jesus’ birth with a short prayer. People go back happily to their homes in the brightness of the early morning sun.

PreviousWhat is the Happiness of Christmas?
NextKenya: An insight into Maasai culture