Ethiopia: The Symbol Of The Cross 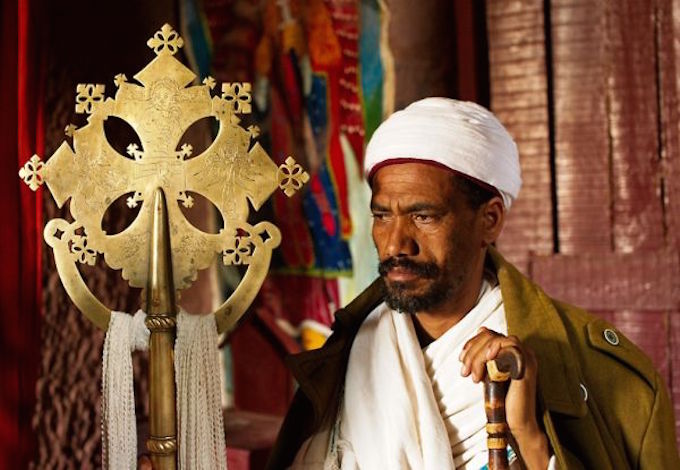 The cross has been developed into a huge number of variations in Ethiopia and are a symbol often visible in public places and the home. They are markedly distinct from European Christian crosses in their design and appearance.

Crosses are inspired by local culture and are made from various materials such as wood, gold, silver, and also iron which is most common. Their design is intricate, and is said to represent the richness of the hearts of people in the Ethiopian Church.

There are three types of Ethiopian cross. The first, the ‘processional crosses’ are carried by priests during religious ceremonies, and are mounted on a long staff. They are dressed with rich colourful fabrics and therefore they incorporate openings to secure the fabrics while being carried, and the crosses are large and elaborate.

While wooden hand and neck crosses are made from the same piece of wood, processional crosses are often made from two or three pieces due to the size.

The processional cross’ smaller sibling is the hand cross. They have a narrow solid handle with a base plate or cube, and are simple in design yet varied.

These are made to be carried by priests and used for blessings or processions, and are also worn by clergy as a pendant.

The most numerous cross in Ethiopia is the neck cross. They are often small and worn round the neck. They therefore have a fastening attached to the top for a cord to pass through. The cord is made up of three strands, which are white, red and black to represent the Trinity.

The neck cross was commented on by Portuguese priest Francisco Alvares, who lived in the country from 1520 to 1526. He who wrote that he had seen laymen wearing small black neck crosses made of wood (the most used material for crosses in the ancient times) and explained that wood should not be used as it’s not durable. Neck crosses were later made with more refined metals, and which would better stand the test of time.

PreviousKenya: An insight into Maasai culture
NextPope Francis: “Peace is a Gift, a Challenge and a Commitment”