Mexico, Merida: The Oldest Cathedral on the American Continent 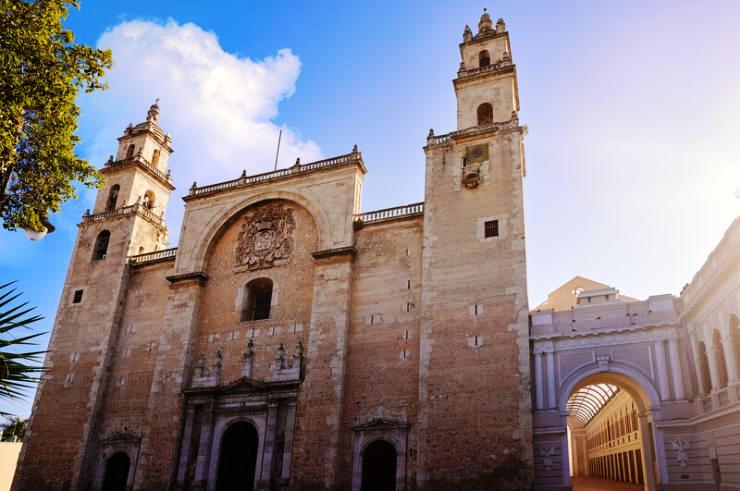 In the north west of Yucatan state is the city of Merida, which is the capital and the largest city of the Yucatan Peninsula. Merida has been nicknamed “The White City” (La Ciudad Blanca).

The reason for the nickname “La Cuidad Blanca” is not clear. Some explanations include the colour of its old buildings. The city has one of the largest centro histórico districts in the Americas (surpassed only by Mexico City and Havana, Cuba).

On the west side of the city’s main plaza sits the impressive Merida Cathedral or Cathedral of San Ildefonso. The church was inaugurated in 1599.  This was the second cathedral to have been built in the New World, the first being the Cathedral of Santo Domingo.

The cathedral has for centuries been noted for its height in the low-rise Yucatecan capital, where tall buildings are still scarce. Several architects and builders were involved in the design and construction, which took nearly four decades, but the person who completed the work was immortalized in an inscription atop the cornice at the base of the dome.

“This work was finished during the reign of his majesty King Phillip II over Old and New Spain and the West and East Indies. The master was Juan Miguel de Aguero. Year 1598.” The arduous task of hauling and handling stones for the construction fell to the indigenous population.

As with other churches and cities in the Americas, the Yucatan capital was built with stones originally used in the pyramids and other structures of the civilization that had once ruled these lands.

The Mayan Books of Chilam Balam says: “Ichcaansiho is the ancient name of the current city of Merida… The name underwent changes… Spanish chroniclers and even some indigenous people recorded it as Ti Ho’ or T-ho’.” One of the translations of the name lchkansiho (a current spelling) is “face of the birth of the heavens.”

Merida was ‘founded’ in 1542 by conquistador Francisco de Montejo (the Younger). Construction of the cathedral began some twenty years later. Historian Miguel A. Bretos, author of an invaluable book on the history of this church, Merida Cathedral. The Great House of God in T’hO. U pakal ku nap y an chumuc cah T’ho, notes that this is where “Christianity began to spread across the country.”

In 1915, during the government of General Salvador Alvarado, the interior of the Cathedral was ransacked by an anti-clerical mob. The burning, sacking, and general destruction wrecked the beautiful main altar, side altars, paintings, statues, and even the lovely choir loft, with its impressive German organ acquired in 1902.

Few of the pieces of sacred art currently in the cathedral are original, but the ravages were repaired over time and other pieces took the place of those that had disappeared. Some years later, a new tubular organ replaced the previous one.

When entering the cathedral, your attention is immediately drawn to the enormous wooden Unity Christ on the main altar. The 25-foot tall work was sculpted in birch by Spanish artist Ramón Lapayese del Río in 1965. The 40-foot mahogany cross is the work of Yucatecan artisans.

The façade of the cathedral exemplifies the simplicity of the style: the smooth walls contrast with the ornate embellishments common to other cathedrals in México. A giant stone coat of arms under the arch of the façade used to show the royal arms of Spain, but the shield has changed over time.

Christian H Rasmussen’s book Merida Cathedral quotes historian Juan Francisco Peón Ancona: “The centre portion of the coat of arms disappeared; it was essentially erased by hammer and chisel, leaving only the blank shield, the crest, the wreath, and the side mantling. Shortly after the coat of arms was damaged in 1824, Emperor Iturbide’s crowned Mexican eagle was sculpted onto the blank shield.”

The church has a central nave and two side naves. There used to be five chapels, but two were sacrificed in the building of the Pasaje de la Revolucion walkway, leaving only the three on the north side: the Baptistery Chapel, the Tabernacle Chapel, and the Christ of the Blisters Chapel. The latter houses a reproduction of the original statue, which disappeared in 1915.

Nearby buildings provide an extraordinary panorama of the cupola. People can view the cathedral from afar for a glimpse of the majesty that adds such an indescribable nuance to a Merida sunset.  It is noon on the dot, the bells of Merida Cathedral ring. Gathered in the plaza under a blazing sun, the crowd turns toward the towers of the iconic church.