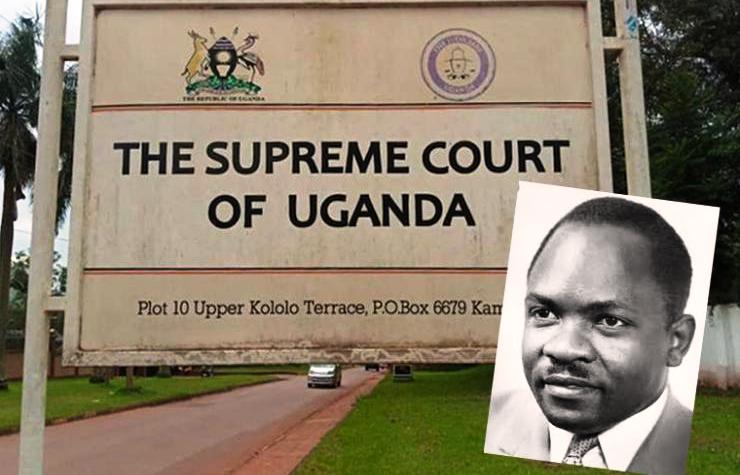 The Ugandan politician Benedict Kagima Mugumba Kiwanuka was one of the early leaders in the independence movement in the country. He was murdered by Idi Amin. His courageous contribution makes him a pioneer of the democracy and human rights in Uganda.

Kiwanuka was born at Kisawaba, in the South of Uganda on 8 May 1922. After his secondary education, at the age of 20 he decided to join the army. Four years later he left the army and resumed his studies. He attended first a University in Rome (Lesotho) then London. In 1947 he married Maxencia Zalwango, who gave him seven children.

With his degree in Law, he started his career as a lawyer in Kampala in 1956. He took an interest in politics and fought for independence. Elected president of the party that rallied mostly Catholics, The Democratic Party, he tried to instil into its members the spirit of discipline that he had acquired from his experience in the army. He was convinced that the secret of democracy lay in the respect for the law and for the dignity of the human person and its rights.

When the first important elections were held in Uganda in 1961 to determine the country’s future, there were only two important political parties: The Democratic Party and the Uganda People’s Congress. The kingdom of Buganda decided to boycott the election. The Democratic Party swept the Buganda elections and won enough votes in the rest of Uganda to secure the largest representation in the legislature. Kiwanuka was asked to form a government, and on July 1, 1961 he became the first chief minister of Uganda. On March 1, 1962 he was appointed Uganda’s first Prime Minister.

Kiwanuka’s time as Prime Minister was fleeting. Neither the British, who backed a Protestant candidate, nor the Kabaka, who considered Kiwanuka a traitor for the Baganda, yielded to the majority’s will. The British declared the elections null and void and ordered a second run.

New elections were held in April of 1962 and Kiwanuka failed to gain re-election to the National Assembly. This time the Buganda participated by allying with the United People’s Congress; their joint forces triumphed, and Milton Obote replaced Kiwanuka as prime minister. Obote then presided over Uganda’s independence. The Democratic Party became the main opposition party, with Kiwanuka as their leader, despite losing his seat in the election.

Elected Prime Minister instead of Kiwanuka, Obote took immediate steps to turn his party into a single party. Kiwanuka invited the DP to oppose firmly Obote’s dictatorial tendencies and declared himself “ready to risk his life for the freedom of expression and association.”

In spite of threats and intimidations, of which he was the target, he considered it his duty to speak and criticize a government which, instead of solving the problems, exploited ethnical divisions and exalted the role of the army. A most brilliant lawyer, Kiwanuka became the defender of those who were harassed by the regime and its lackeys under the pretext that they were enemies of the state.

He was arrested a first time in September 1969: the authorities didn’t like the criticisms of The Democrat, Kiwanuka’s party’s newspaper. The trial against him proved how much Kiwanuka was known and loved by the people. As he entered the court room, his supporters shouted: “As a leader he excels, as a lawyer he is the best, his dress is the smartest, the majority are with him.”

He was acquitted of all the charges. However, he knew that it was only a question of time. As a matter of fact, Obote was all out to neutralize all forms of opposition. The opportunity came to him in October 1969, when going out of the Lugogo stadium, somebody fired a shot at him, wounding him slightly.

The police made a number of arrests, especially in the political circles. Kiwanuka also was taken to jail. He was kept there for a full year. “A terrible experience, in a room of 8 square feet. A life in total isolation and with no communication with the outer world.”

On 25 January 1971, Idi Amin seized power. Two days after the coup, he ordered the release of Kiwanuka and all other political prisoners. The intentions of the strong man, promising peace, unity, and democracy seemed to promise a brighter future for the country. Kiwanuka urged his followers to support Amin’s programme. “You know.” Kiwanuka confided to a friend, “he who signed the order of my arrest was the Minister of Home Affairs, a former secretary of my party, gone over to the opposition. However, I don’t wish him any harm, I leave it to God to judge him.”

On 6 June 1971, Kiwanuka was made Head of the Supreme Court of Justice. “You have a long history of fight for the defence of the oppressed. We believe that, with you, injustice and oppression will disappear from our happy land,” said Amin at Kiwanuka’s swearing in ceremony.

It took only few months to find out Amin’s real intentions. In August 1972 he ordered all Asians out of the country within 90 days. Kiwanuka protested against this decree which he considered illegal, because they were Ugandan citizens: this could not allow the confiscation of all their goods without compensation. Another episode, which enraged the dictator, was connected with Donald Stewart, an English businessman, arrested and imprisoned by the soldiers without charge. No lawyer in Kampala accepted to take up his defence. Kiwanuka did, in spite of cautionary advice from his friends and the threats from above.

Kiwanuka was by now taking decisions which were certainly not in line with those of the tyrant. A month before his arrest, on the 28 August 1972, he had released some prisoners on bail: “As I have often told you,” he explained “the police must wake up and realize the importance of the citizens’ freedom. People cannot be detained for longer than it is absolutely necessary.”

On 8 September 1972, Kiwanuka intervened in the case of Donald Stewart: “The soldiers of this country,” he said “have no power to arrest, under any circumstances.”

One day he told a friend, in connection with the many warnings received: “You see, I am innocent, and I have a family. I don’t think I have the right to leave the country to save myself. No, I am going to remain and trust in God, as I did on other occasions in my life, and I have always been blessed.”

His inflexibility could only send the tyrant into a rage. On 21 September 1972, after the Mass, which he attended daily at the Rubaga cathedral, he went to his work. All of a sudden three-armed men of the State Research Bureau burst into his office. They seized the magistrate, dragged him to their car and took him to Makyndye barracks. There they stripped him naked and tortured him. He died most probably the day after. Nobody knows where he was buried, if he was at all. “The only person who would know the secret of Kiwanuka’s murder is Amin.”

Kiwanuka was murdered because he defended human rights. His courageous contribution makes him a pioneer of the democracy and human rights in Uganda, and a martyr for these values.

His widow Maxencia testified: “Amin wanted to condemn certain persons and wanted my husband to invent bogus legal motivations. As an honest catholic he could not.”