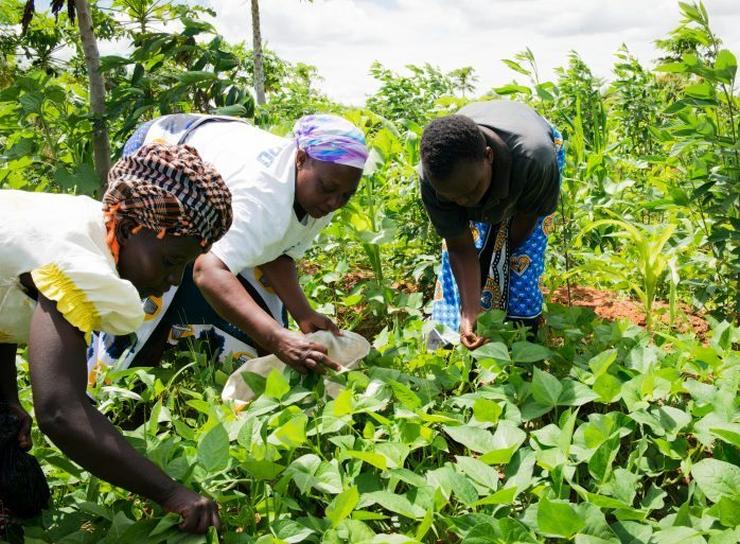 KOFAR was founded to respond to the challenge that many farmers face with soil fertility that results in soil acidity and poor yield. Many farmers were not aware that there was a connection between healthy soils and yields. Poor yield aggravates the poverty situation of the farmers.

Franciscah grew up in the village in Kirinyaga among five siblings and her mother, then a farmer, was schooling all of them. However, by the time she was working and all her siblings were through with college, her mother started asking for money to buy inputs for the same farm. It was quite puzzling for Franciscah and her siblings that her mother who had managed to raise them up with resources from the farm was now asking them for money.

They probed for the reason, and her mother explained that the yields had gone down and so many of the crops were no longer growing very healthily in her farm. Franciscah got curious. “I also followed up on a few others in our area, home area and discovered that the problem was all over. So, the curiosity also took me to some parts of Meru and the story was the same. By this time, I didn’t know that there was an issue of soil acidity where nutrients get locked up and the crop can no longer feed even when you put your fertilizers. So, my curiosity took me to experts and the experts explained the connection between soil acidity and the yields and I started looking for a solution for that.”

In her quest for a local solution she realized that something that had happened in the developed world. “Soil acidity and low yields had happened in all those who had overused their soils and they already found a solution,” she explained.

“So, bringing it home to Kenya, reversing acidity, boosting the moisture retention and having farmers produce more was something easy and workable for me because others had already done it.” She was motivated when she discovered that there were scientists out there who had found a solution to this problem and she could facilitate its customization for the local need in order to help her people.

At KOFAR they only deal with soil fertility problems. They noticed that soil acidity was already interfering with yields, so they create conditioners to help loosen the soils and then the compost that helps in improving on moisture retention and enzymes that handle on soil borne diseases. KOFAR’S growth is a source of great impact in the communities it serves.

KOFAR has assisted over two thousand farmers, handling or reversing acidity in their farms and has trained over ten thousand farmers. These farmers have seen their yields double or triple within one season. KOFAR’s impact is observed in terms of yields, in terms of healthy crops, in terms of incomes for the farmers and for Franciscah and her team of employees.

Even so, KOFAR’s growth does not cushion it from the myriad challenges that entrepreneurs face in Africa. According to Franciscah these challenges include not having enough working capital to start an enterprise, expensive labour force particularly in Kenya where KOFAR is located that makes it difficult to have a skilled team for better business productivity, and having strategic partners to work with.

Franciscah’s positive outlook has enabled her to find viable solutions to her challenges and failures that include getting the right team to work with, collaborating with a strategic partner to help them tackle the challenges brought by unpredictable weather patterns and the MBA training for social entrepreneurs in Tangaza University College that has helped in upgrading the business, attracting investors and eventually growing in a systematic manner.