Oral Literature: Why Monkeys Choose to Live Up Trees 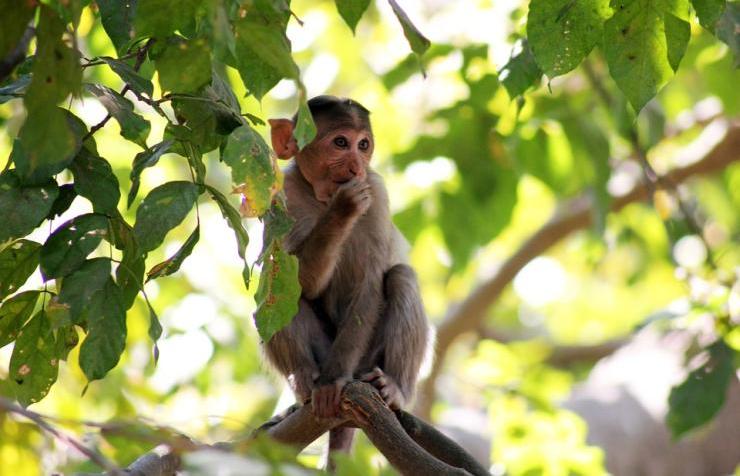 From sunrise to sunset, old Bushcat was out hunting, but she had not been successful in finding food, not even a snake.

So, exhausted, she lay down in the shade of an old, gnarled tree that was about the same age as she was. They had both known almost twenty summers.

But Bushcat was restless as she tried to find rest in the shade. Fleas attacked her incessantly and she grew more and more irritated. Then, just as she lifted her head to capture the last rays of the setting sun, she caught sight of Monkey in the tree above her.

Please help me to get rid of these fleas that arc attacking me,’ Bushcat pleaded with Monkey.

Monkey swung down from the leafy branches of the tree and started picking the fleas off Bushcat’s tawny body. Bushcat was so soothed by Monkey’s action that she fell asleep. Monkey then seized the opportunity to tie Bushcat’s tail to a low branch of the tree and ran away chattering to himself.

When Bushcat awoke and tried to stretch, she felt that her movements were restricted. Then she noticed that her tail had been fastened to the tree and she twisted her body this way and that, trying to free herself. But she was tied fast.

Darkness was falling and as Bushcat fixed her vision on the ground in front of her, she noticed a tiny creature creeping slowly past her.

“Snail, please untie my tail,” she said. “You’ll eat me, Bushcat,” said Snail, trying to get out of Bushcat’s way. “I promise I won’t,” said Bushcat in a reassuring voice.

So, Snail slowly untied Bushcat’s tail from the lowest branches of the gnarled tree and crept away into the darkness that was just lit by a crescent moon.

When Bushcat arrived home, she immediately issued the following instruction to all the animals. “Five days from now, tell everyone that I am dead and that you are going to bury me.”

The animals were surprised, but they agreed. When the fifth day dawned and the early morning silence was broken by the first birds, Bushcat lay down flat against the hard earth and feigned death. The animals danced around her and continued to dance, exactly as they had been instructed to do.

Suddenly, Bushcat jumped up and tried to pounce on Monkey. But Monkey had already sprung into the tree above the animals, thus escaping Bushcat’s anger.

And so, to this day, Monkey does not consider it safe to stay on the ground, as Bushcat might catch him. That is why he chooses to live up a tree.