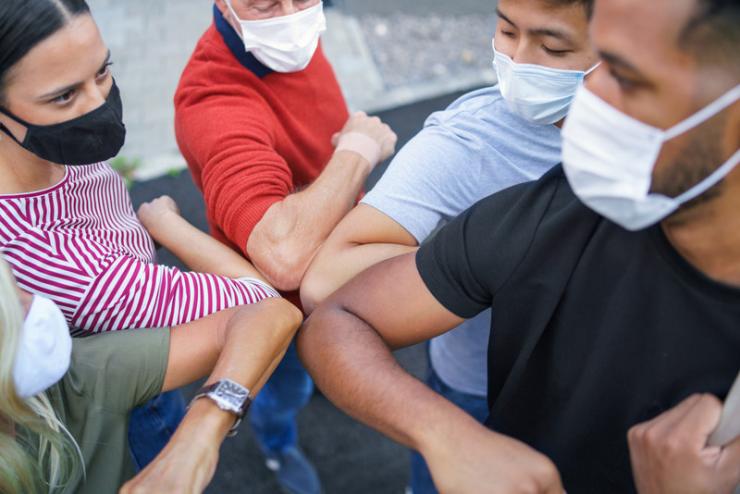 The human species thinks that it the smartest that ever evolved on this planet. We think we are smarter and more powerful than all other species.

Have we now met our match by non-living entities, pathogens no less? They need a host to replicate and so they invade the cells of plants, animals and humans. Once inside the cell, the virus will devastate the organism and it is a fight to survive. There are more than a quadrillion viruses on this planet, more than all the billions of stars in the universe. So, we are outnumbered in this battle against the killer virus.

The Covid-19is an almost invisible species of virus that has invaded our society, infected our bodies, devastated families, brought much human suffering and loss having taken 2.32 million lives and crippled our entire economy. One hundred and six million people have been infected and many are grievously sick, according to the Johns Hopkins University. The infections and deaths continue as you read this. There is no known effective medication for Covid-19.

One year ago, this great shock hit our once impervious and proud world and what a humiliation that was to the human species. Not only did we humans not understand how to protect and cure ourselves, but millions of people still go about in gross ignorance of the danger and ignore the protective measures, such as masks, distancing and lockdowns, needed to protect ourselves and our neighbours to stop the virus from spreading. Hospitals in many countries are overwhelmed.

A small number of virologists, scientists who study the nature of a virus, have come to the rescue in super quick time to invent vaccines. Many were already halfway there, having worked on developing a vaccine for previous relatives to Covid-19. After the last pandemic of Severe Acute Respiratory Syndrome (SARS) that was first identified at the end of February 2003 during an outbreak that emerged in China and spread to four other countries, research continued, expecting the next mutation.

It seems that many governments and societies have ignored the dangers posed. It has now been established by the latest investigation by the World Health Organization (WHO) that the virus passed from animal to animal and to humans. It is established that it first emerged at the Wuhan wet food market where exotic animals were kept and slaughtered for food and that is where it made its transition to humans.

The invasion of the natural world by us humans to plunder, devastate and waste the natural world’s resources is at the root of the problem. Scientists and researchers know that the destruction of the rain forests everywhere make animals live in closer proximity to humans and infections is likely. The rain forest destruction is also eliminating thousands of other species. We are a very violent and destructive species to walk this planet to the point that the human species, us with the big developed brains and so-called intelligence, are acting in a very unintelligent way.

Destroying the Amazon rain forest to replace it with pasture for 200 million cattle to supply beef for the western world, cattle-ranching has taken over 75 percent of all destroyed forest in the Amazon. Incursion of outsiders into the forest lands of the indigenous people has brought death and sickness to them. They are in a dire state with the Covid-19 for which they have no resistance. The indigenous people face extinction.

Climate change by global warming and an excess of CO2 and methane in the environment is one more self-destructive behaviour of the human species. We are living in such an extravagant way that we are destroying and damaging the environment that we depend on to continue healthy living. There are about 989.03 million head of cattle in the world, as of 2019. That is a reduction from over one billion cattle in 2014. Yet the methane gas they produce contributes greatly to global warming.

So, people are eating less beef perhaps and hopefully that trend will continue. Eating more plant-based foods such as vegetables and fruit is the healthy and more nature-friendly way to live.

The truth of that dangerous impact of global warming is coming home to us now as some nations are buried in excessive snow storms while in other regions of the planet forests are burning and killing millions of animals. The oceans are acidified, crops wither and die because of droughts and yet in other parts of the world crops are destroyed and hundreds of animals and people are drowned due to massive floods and landslides.

What a challenge we face, we need to change faster, to adapt and turn more quickly to non-fossil fuels, use renewable sources for electric power, drive electric cars, practice recycling on a massive scale and elimination of plastic. Eating plant-based food is something we can start with and go on from there. The vaccine has brought hope for survival for millions and may we learn important lessons on how to change our lifestyle. Live with respect for the natural world and the creatures of the earth.