Chefchaouen: The Blue Pearl of Morocco 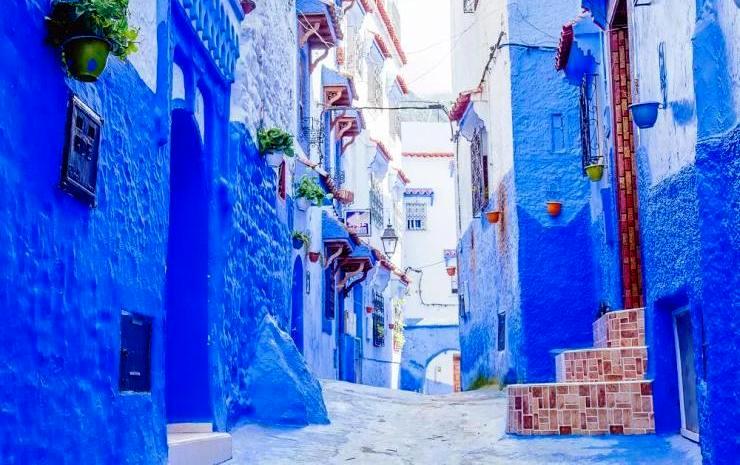 One of the most beautiful cities in North Africa is the blue Moroccan city known as Chefchaouen. It is above all else a place of peaceful coexistence and mutual respect between peoples and religions.

It is known as the “Blue Pearl” due to its historical centre painted in blue which distinguishes it from the other ancient cities.  There are different theories about the blue talc or chalk-based paint. Some say it repels mosquitoes and helps to keep the inside of the houses cool while others say it was the Jews fleeing from Nazi persecution in Europe in the thirties, who chose the colour of their heaven and paradise.

What is certain is that it is universally known by its azure and blue colours, with an infinity of shades from light blue to indigo, from turquoise to cobalt, with sapphire as the dominant tone.

Nestling among the Rif Mountains in the region of Tangri-Tètouan-Al Hoceima, in Northern Morocco, it is surrounded by peaks that seem to touch the sky; Chefchaouen, in fact, means “Look at the Peaks”. The city was founded in 1471 by Moulay Ali Ben Moussa Ben Rached El Alami, who used it as a fortress to defend against the Portuguese and Spanish invaders who had conquered the coastal cities.

At the end of the XV century, Chefchaouen was chosen as a refuge for Andalusian Jews after the edict of expulsion by the Catholic sovereigns Isabela of Castile and Ferdinand of Aragon. The original nucleus of the city developed around the imposing military fortress.

In the course of time, Koranic schools, mosques and synagogues were built in an environment of peaceful coexistence and respect.  Its isolated position meant that the city could boast, until the XIX century, the status of bilal al-siba, that is, a territory independent of the central power. Only recently its doors have been opened to tourists, revealing the splendour of its alleyways and of its dwellings.  Wandering through the narrow streets and steep alleyways of Chefchaouen, one enters a blue-coloured world of serenity and peace. There Berber, Andalusian and Moorish traditions merge.

“The city is an inexhaustible fountain of inspiration and fascination,” Karim Buzaglo, one of the cultural leaders of the place explains. “It is only necessary to lose oneself in the alleyways to become immersed in a magical atmosphere that can transform a person.”

Among the many blue buildings in Chefchaouen, one edifice built of salmon-coloured stone stands out: this is the Kasbah, a fortress surrounded by walls built in the XV and XVI centuries at the orders of the founder of the city, Moulay Ali Ben Moussa Ben Rached El Alami.  This small but fascinating building in the Andalusian-Magreb style has 11 towers; it is possible to climb to the top of some of them and admire the splendid views of the city and its surroundings. Built inside a garden of luxuriant trees, the Kasbah has a small but interesting Ethnographic Museum displaying Moroccan craftwork in wood, plaster and tiles.

Leaving the Kasbah, located in the main square, Place Outa El Hammam, we move towards the Great Mosque. It is the chief religious building of the city, painted in white, brown and beige, and adorns the square with its octagonal stone minaret, an architectural form showing Andalusian influence.
In Mellah – the old Jewish quarter – there is a small shop that sells handmade lamps.  “The art of lamp-making has Jewish origins. It was my grandfather who started this business and it has been handed down from father to son,” we are told by artisan El Atoui, as he works with his hands to transform metal and glass into splendid lanterns, hanging lamps and ceiling lights.

Chefchaouen is famous for its hand-woven blankets, its shawls and woollen clothes as well as its cane hats decorated with coloured tassels of twisted wool that are a traditional characteristic of the northern region. The city was declared a World Heritage Centre by UNESCO in 2010.