Mexico: colours, the meanings and rituals of everyday life 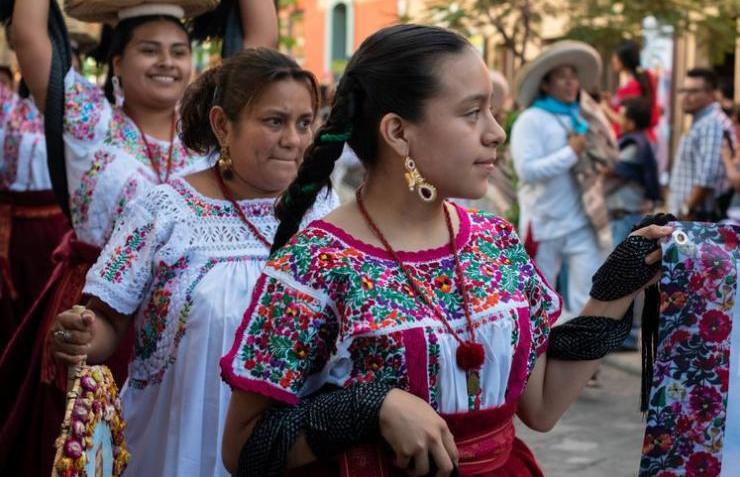 The purple, carmín (deep red) and blue were very popular colours among ancient inhabitants of Mexico because they were associated with the population’s cosmovision. Colours were often symbols of power, strength, nobility, fertility, territory and culture.

The three colours are of indigenous origin and today they are used in many communities to dye traditional garments such as huipiles, loose-fitting tunics worn by indigenous woman from Mexico; the quechquemitl, the original Puebla poncho or shawl-like garment consisting of two pieces of rectangular cloth, often woven by hand, which is usually worn hanging off the shoulders; the rebozos, which are the typical shawls of this country.

The ancient settlers of Mexico painted the bodies of their dead in a red colour, which was believed to have magical powers that would provide the dead with the necessary energy to continue their path after death.

The art of tracking time among ancient American peoples, which dates back much earlier than the arrival of the Spanish conquerors, developed alongside the improvement of textile manufacturing. Colour, in America, has been the distinguishing element of ethnicities and castes, as well as the element to express the meanings and rituals of everyday life. Nowadays, some ethnicities such as the Huichol, Tarahumara, Cora and Lacandon peoples still use vegetable dyes to paint their body.

The purple snail (Plicopurpura pansa), which is only found on the coast of Oaxaca Mexico, more precisely in the Huatulco National Park (a protected natural area since July 1998), is an invertebrate mollusk that produces a substance of purple colour which has been used by millenarian cultures to dye cotton thread.

Researchers have assessed the sea snail as an endangered species. Purple snails, which can be found mainly in the bays of Santa Cruz and Tangolunda, can only been seen during droughts, because during the times of rain these animals are in their reproductive process.

The use of the purple snail to dye garments is a centuries-old tradition. Among the Mixtecs, an ethnic group of Mexico, the purple snail symbolizes fertility, strength, power and death. This community is very respectful of the life cycle of this species. They extract just a little dye from the animal, milking only every 30 days; they do so to let the snails recover from the milking and help out in their preservation.

They use a wooden stick made from the huizache tree; they locate the snail and gently pull it off the rock and rub and lightly squeeze it to get the dye out. This substance is actually a defence mechanism of the animal. The liquid is whitish and as soon as it’s milked, it is rubbed on cotton threads; at first the dye colours the cotton a green-blue tone. Then the cotton is let to dry in the sun and this action will oxidize the dye and give it the characteristic purple tone.

The Maya blue is another mystical colour of Mexico; it derives from the Xiuquilite, also called blue grass, which is cultivated mainly in the central area of the country and it was used to dye ceremonial costumes. Since the 16th century, indigo was one of the most exploited natural resources in Central America. A chronicler, Franciscan Fray Bernardino de Sahagún wrote in the sixteenth century: ‘There is an herb called xiuhquilitl, which loves warmth and humidity, its extract is dark blue and it is a very beautiful colour’.

Maya blue was used to decorate pots, sculptures, codices, panels and mainly textiles. Since Maya blue is a natural dye, it required the use of chemicals called mordants such as alum, nitro or nitrate to bind the dye to the textile fibres and to create several colour ranges.

The cochinilla or tuna blood is the third mystical colour of pre-Hispanic Mexico. It is a red dye whose primary constituent is carminic acid that is obtained from the dried and pulverized bodies of female cochineal insects. The cochineal (Dactylopius coccus) is a parasitic insect that lives on cactus. About one kilo of cochineal yields approximately five litres of paint, which is the amount needed to paint about twenty skeins with which two or three large blankets can be made.

Multiple ranges of carmín (deep red) can be obtained from the pulverized insects. These colours are used all over the world for cosmetic brands, food products and many other items. Carmín was the colour of nobles and it spread, through the Port of Veracruz, to the most remote places of the East. Its value was equal to the value of gold and silver.

The appreciation and return to the ancestral, organic and natural products, and the acknowledgment of the importance of respecting the environment, has led to the revaluation of the mystical colours of Mexico. According to Michel García, one of the most recognized experts of natural dyes in the world: “When it comes to dyes, Mexico is the most amazing place. Here, the best ingredients for dyeing are produced in the whole range of colours: blue, red, yellow and their mixtures, including black, green, violet and orange.”

PreviousVocation Story: Father Stefano, from ski instructor to Comboni missionary in South Sudan
NextOral Literature: the Leopard and the Dog