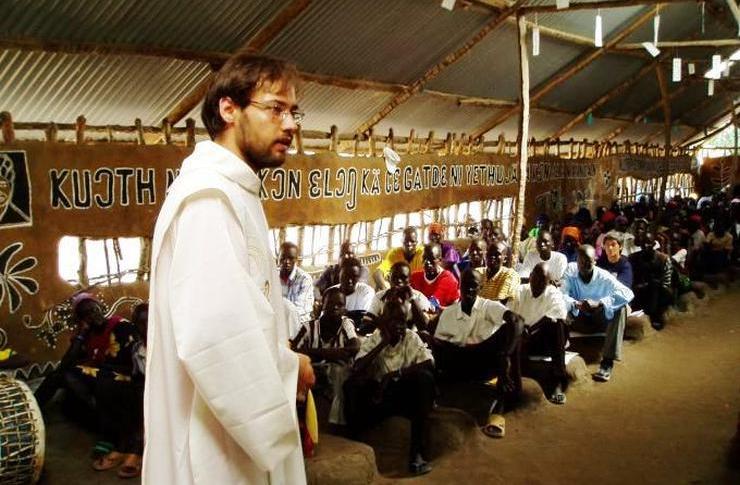 In his first message to the Christian communities of the diocese the new bishop said: “I am grateful to Pope Francis and the Church for the love and trust that have shown by calling me to the episcopal ministry and appointing me to be the Bishop of Rumbek.”

He continues: “My thoughts go out to all the people of the diocese and their desire to encounter Christ in the Church. My obligation goes to all priests that are serving in the diocese, in particular Fr. John Mathiang for his commitment to lead the diocese in the past years as diocesan coordinator. I also recall the person of the late Bishop Caesar Mazzolari who gave his life to the people of Rumbek with the spirit of a good shepherd.”

“My appreciation goes to all the religious institutes and communities of men and women that enrich the diocese with their charisms, among them I show special gratitude to my confreres, the Comboni Missionaries and sisters. I am also indebted with the Diocese of Malakal for the spirit of communion, support and kindness: May God reward you,” he said.

The new bishop recognized the commitment of laity serving in the Rumbek diocese. He pointed out: “I also acknowledge the commitment of many lay people, whether native from Rumbek or from other places and countries, those who work in the offices and institutions of the diocese, and committed Christians such as catechists, members of church councils, associations, men and women, youth and elders who form and build up this family of God.”

He concluded: “I want to express my readiness to join the diocese of Rumbek entering in the journey that you have been doing so far and offering my humble self. But, at this moment, what I ask you more is for your prayer, with the trust that our Lord who started this good work will assist me with his grace and bring it to completion.”

Msgr. Christian Carlassare, was born on 1 October 1977 in Schio, Vicenza, Italy. After primary and secondary school, he attended an orientation course at the Comboni Missionary Seminary in Thiene, Vicenza. He carried out his postulancy and philosophical studies in Florence at the Theological Faculty of Central Italy, and his novitiate in Venegono Superiore, Varese.

After ordination, he attended an English language course (2004-2005) and went to South Sudan to learn the Nuer language at the Holy Trinity Parish, Old Fangak County (2005-2006). He subsequently held the following positions: vicar (2006-2007) and parish priest of the same parish in Jonglei State (2007-2016); member of the Secretariat of Animation of Vocations and Basic Formation (2011-2019); Provincial Councillor of the Comboni Missionaries, South Sudan (2012-2019); Secretary of the Provincial Council of the Comboni Missionaries (2014-2016); Vice Provincial in South Sudan (2017-2019); and Promoter of Vocations and Director of the Orientation Course (pre-Postulancy) for the Comboni Missionaries in Moroyok (Juba) (2017-2020). From 2020 until the present, he has served as Vicar General of the Diocese of Malakal.

The Diocese of Rumbek (DOR) is one of the seven Catholic dioceses existing in South Sudan. Located in the heart of South Sudan, it covers the entire Lake region and the southern part of the Warrap region – an area of approximately 65,000 square kilometres and is inhabited by about 5 million inhabitants. The diocese includes 11 main missions: Rumbek, Marial Lou, Warrap, Tonj, Agangrial, Wulu, Mapuordit, Yirol, Bunagok-Aliap, Cueibet, Barghel.

Established as an apostolic vicariate in 1955, it was elevated to the status of diocese in 1974. Led from 1999 until 2011 by Bishop Cesare Mazzolari. Fr. Fernando Colombo, another Comboni missionary, was administrator of the diocese until December 2013, when the Prefect of the Congregation for the Evangelization of Peoples appointed Fr. John Mathiang as diocesan coordinator.

PreviousBrazil: Capoeira, the dance of the resistance
NextAfrica is home to six of the 10 crises identified by the UN