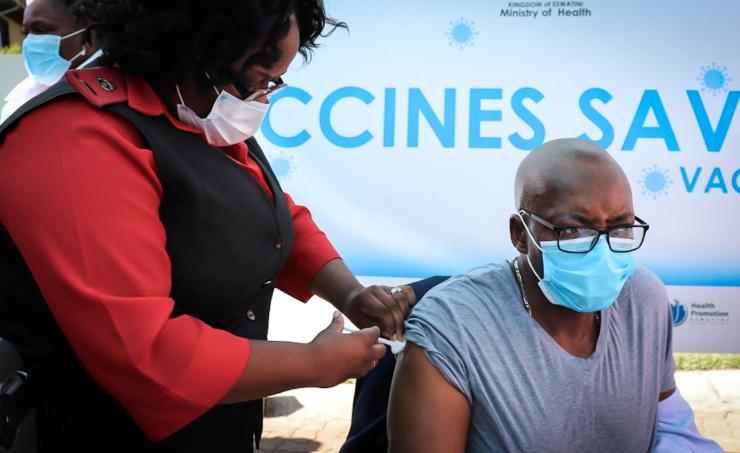 Slow vaccine rollout with limited doses. Healthcare systems are not keeping up with the situation. South Africa is facing a third wave.

Coronavirus vaccine distribution in Africa is slow and hampered by a lack of supplies, with concerns for the timing of the second doses.  Africa’s COVID-19 cases hit a 4.8 million mark with 134,000 confirmed deaths. But only 31 million people were vaccinated with the first dose out of a total population of 1.4 billion. Africa accounts for under 1% of the over 2.1 billion doses administered globally. Vaccine rollout stalled in the first stage: only 9.4 million Africans were administered a second dose.

Morocco tops the list of African countries that administered the highest number of vaccines with 10 million doses, but with concerning delays between the first and second dose. Ghana (almost 600,000) and Kenya (340,000) come next. However, these are negligible figures compared to national populations. The problem remains: Africa is short of 1.5 billion doses of the vaccine.

After India’s Serum Institute (under Covax) was forced to halt shipments of AstraZeneca to meet domestic demand, Africa’s vaccine rollout has hit a dead end. In fact, Kenya and Ghana extended the interval period between the first and second shots from 8 to 12 weeks to buy time while waiting for more doses of the vaccine.

In South Africa, the first deliveries of the vaccines began last March through Covax -a mechanism for equitable distribution of COVID-19 vaccines – but the program is progressing at a slow pace, favouring new waves of infection. “There is now talk of a third wave of the virus here in Johannesburg and also in Durban. Cases have increased threefold in the last month”, said a Comboni Father Efrem Tresoldi.

The virus has changed to a new more severe variant in South Africa, where about 57,000 people were killed by COVID-19 – a figure that is actually threefold higher. South African and Indian variants are the most unpredictable. “We are again living in fear, knowing that the situation is bound to get worse since winter has just begun,” Fr Tresoldi pointed out. “In townships, people have hardly any living space, their houses are too small to ensure physical distancing.”

Nigeria has received 3.9 million doses of the AstraZeneca vaccine through the COVAX Facility, which is co-led by the Coalition for Epidemic Preparedness Innovations (CEPI), Gavi, the Vaccine Alliance and WHO in partnership with UNICEF. As of 6 June 2021, the country had administered over 2.3 million doses: about 1.96 million had received the first dose and 336 500 the second.

Senegal is surprisingly among the African Countries with the most developed vaccination systems. This applies also to its capacity to manufacture its own vaccine. Dakar has made an agreement with Belgian biotech group Univercellsas to produce its own COVID-19 vaccine starting next year.
At the moment it is used for the first and second doses of China’s SinoFarm vaccine, as well as Astrazeneca.

But the biggest problem in Africa remains the lifting of patent protections. “South Africa is determined to pursue its international lobbying efforts for the lifting of patents on COVID-19 vaccines”, said Father Efrem. “President Ramaphosa has met with president Macron, who is in favour of opening intellectual property. Vaccines must be accessible and affordable to all. In this respect Johannesburg is fully prepared: South Africa overrode patents on AIDS drugs some 20 years ago, when antiretrovirals were not available and the country decided to produce generic drugs, regardless of patents”, Tresoldi recalled.

Nowadays, the battle to lift patent protection is rapidly becoming “a battle of civilisation”. But there is also another unknown factor, and its people’s fear of vaccines imported from abroad, which could jeopardise an already precarious situation. As with Ebola in Congo, people fear a “Western conspiracy.”

Madagascar and Tanzania. The Africa Center for Strategic Studies called for “dispelling COVID vaccine myths in Africa”, the first myth being that “there is no COVID.” The latest myth is that it only kills “white people” and that herbal remedies are more effective than medical drugs. In this respect, such myths abound.

Madagascar has chosen the path of alternative treatment: Madagascar’s President Andry Rajoelina discarded the vaccine option to favour herbal “cures”, which predictably the WHO did not endorse. In Tanzania, after denialist President John Magufuli was killed by COVID-19 last March, the country reverted to prevention and treatment.

PreviousOlympics: Refugee Team to compete in Tokyo
NextD.R. Congo: Being together and sharing