Oral literature: The Tortoise, the Leopard and the Bush Rat 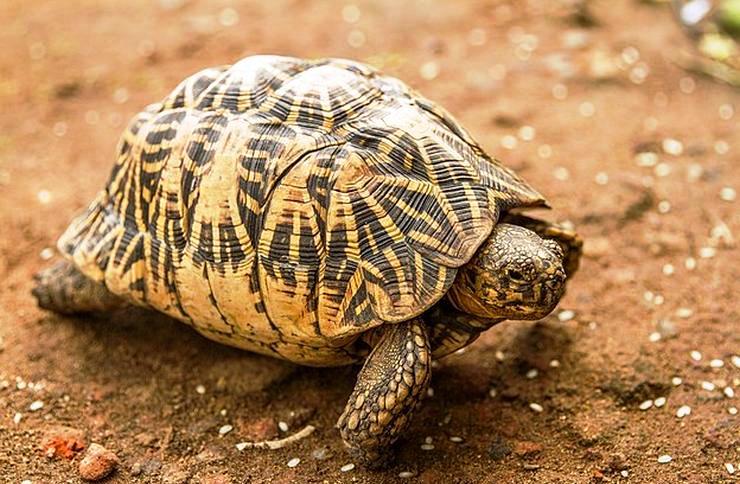 Once there was a great famine on earth, and all the animals were very thin and weak from want of food; but there was one exception, and that was the tortoise and all his family. They were very fat, and did not seem to suffer at all. Even the leopard was very thin, in spite of the promise of animals to bring him other animals for food.

In the early days of the famine the leopard had killed the mother of the tortoise. The tortoise, then, was very angry with the leopard, and intended, if possible, to be even with him. The tortoise was very clever and had discovered a shallow lake full of fish in the middle of the forest.

Every morning he used to go to the lake and bring back enough fish for himself and his family. One day the leopard met the tortoise and noticed how fat he was. As he was very thin himself, he decided to watch the tortoise.

The next morning, then, the leopard hid himself in the long grass near the home of the tortoise and waited, until the tortoise came along with a heavy basket. Then the leopard jumped out, and said to the tortoise: “What have you in that basket?”

The tortoise did not want to lose his breakfast, and would not tell what he was carrying; but the leopard could easily tell things by smell. He knew at once that there was fish in the basket. He then said: “I know there is fish in there, and I am going to eat it.”

The tortoise was afraid to refuse. As he was such a poor creature, he said: “Very well. Let us sit down under this shady tree, and if you will make a fire, I will go to my home and get pepper, oil, about for dry wood. and salt, and then we will eat together. Isn’t that fair enough for both of us?”

The leopard agreed to do this and began to search about for dry wood to start the fire. While the leopard was doing this the tortoise moved slowly off to his house, and very soon came back with the pepper, salt, and oil. He also brought a long piece of cane tie-tie, which is very strong. He put this on the ground, and began boiling the fish. Then he said to the leopard: “While we are waiting for the fish to cook, let us play at tying one another up to a tree. You may tie me up first, and when I say, ‘Tighten,’ you must loosen the rope, and when I say ‘Loosen,’ you must tighten the rope.”

The leopard was very hungry, but he thought that this game would make the time pass more quickly while the fish was being cooked. He, therefore, agreed to play. The tortoise then stood with his back to the tree and said: “Loosen the rope.” The leopard, as he had agreed, began to tie up the tortoise.

Very soon the tortoise cried out: “Tighten!” The leopard at once unfastened the tie-tie, and the tortoise was free. The tortoise then said, “Now, leopard, it is your turn.”

But instead of playing the game as he said he would, the tortoise ran faster and faster with the rope round the leopard. He took care to keep out of reach of the leopard’s claws, and very soon had the leopard fastened so tight that he could not get away.

All this time the leopard was crying out to the tortoise to let him go, as he was tired of the game; but the tortoise only laughed, and sat down at the fireside and commenced his meal. When he had finished eating all he wanted, he picked up the remainder of the fish for his family, and made ready to go. Before he started, however, he said to the leopard: “You killed my mother and now you want to take my fish. It is not likely that I am going to the lake to get fish for you, so I shall leave you here to starve.”

All that day and throughout the night the leopard was yelling for someone to let him loose; but no one came, because the people and animals of the forest do not like to hear the leopard’s voice.

In the morning, when the animals began to go out to find food, the leopard begged every one he saw to come and untie him; but they all refused, as they knew that if they did so the leopard would most likely kill them at once and eat them.

At last, a bush rat came by and saw the leopard tied up to the tree and asked him what his trouble was. The leopard told him that he had been playing a game of ‘tight’ and ‘loose’ with the tortoise, and that he had tied him up and left him there to starve. The leopard then begged the bush rat to cut the ropes with his sharp teeth.

The bush rat was very sorry for the leopard; but at the same time, he knew that, if he let the leopard go, the leopard would most likely kill and eat the one that had thus done him a kind act. He therefore hesitated, and said that he did not quite see his way clear to cut the ropes.

But this bush rat was very kind-hearted. He had had some experience with traps himself, and could sympathize with the leopard in his pain. The bush rat therefore thought for a time, and then made a plan. He first started to dig a hole under the tree. When he had finished the hole, he came out and cut one of the ropes, and immediately ran into his hole, and waited there to see what would happen; but although the leopard struggled very much, he could not get loose, as the tortoise had tied him up so fast. After a time, when he saw that there was no danger, the bush rat crept out again and very carefully bit through another rope, and then came back to his hole as before. Again, nothing happened, and he began to feel safe. He then bit several strands through one after the other until the last rope was cut and the leopard was free.

The leopard was wild with hunger. Instead of being grateful to the bush rat, as soon as the leopard was free, he made a dash at the bush rat with his big paw, but just missed him, as the bush rat had dived for his hole. The bush rat, however, was not quick enough to escape the leopard’s paw, and the sharp claws scratched his back and left marks which all bush rats carry even to this day.