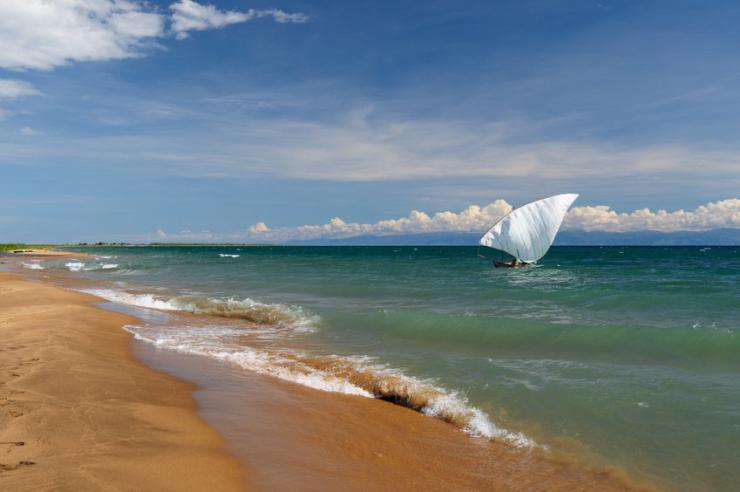 Long, long ago, in the region where you see the lake, there was a wide plain where many tribes lived who had large herds of oxen and goats. In this plain was a very large village. As was the custom in those days, all the houses of this village were surrounded by tall hedges with stalls where people kept their cattle for the night to keep them from wild beasts and robbers.

In one of these enclosures there lived, with his wife a man who owned a deep spring from which a little stream came. This spring, strange to say, contained many kinds of fishes which the man and his wife used for food; but this large supply of food was a secret. No one outside the family knew it.

A story handed down from father to son said that the day when the secret should be told by one of them to strangers, the family would be ruined and destroyed. It was very necessary, then, to keep this secret. By and by there came into this family a pretty daughter. She grew to be a woman and many young men from around came to admire her.

It happened, unknown to the father and mother, that the daughter loved one of these men, and her love for him increased. One day she secretly brought the young man some fish from the wonderful spring. The flesh was so good and of such a fine flavour that her lover wanted to know whence it came. The daughter kept silent for a long time through fear of what might happen if she told the secret. Finally, she promised to tell it. Her love for the young man was so great as to make her believe that she must do whatever he asked of her.

One day the mother and father had to make a journey; before starting they strictly cautioned their daughter to keep the secret about the wonderful spring, to admit no strangers into the home, and not to gossip with the neighbours.

The daughter promised; but as soon as the mother and father had started, she went hurriedly to find her lover. “Come – she said -, you are going to learn now where the fish comes from.” Her lover went with her. He entered the house, where the daughter gave him palm wine, bananas, sorghum porridge, palm oil, seasoned with pepper, and a quantity of fish.

When he had finished the meal, the man said, “Show me where you catch the fish.” She replied, “Yes, but it is a secret which, if told, will cause great misfortunes.” “Fear not,” said her lover. They rose. She led him within the enclosure and showed him what seemed to be a little pool, round in shape and full of clear water, which bubbled out of the ground.

“Look,” she said, “there is the wonderful spring, and there are the delicious fish.” The young man had never seen anything like it, for there was no river nearby. A fish came near him, and he stretched out his hand to catch it. Alas! That was the end of everything!

The muzimu (spirit) was enraged. The earth split asunder; the plain sank so deep that the longest plummet cannot go to the bottom of it; the spring overflowed and filled the great chasm which had appeared in the earth. And now what do you see at the spot?  Tanganyika.